Softball Seniors: A Season in the Sun

Written by Sierra Thompson on April 7, 2015. Posted in Sports

As the Missouri Baptist University softball team continues the 2015 spring season, the seniors reflect on their time spent playing softball and what they want to accomplish in their final semester. 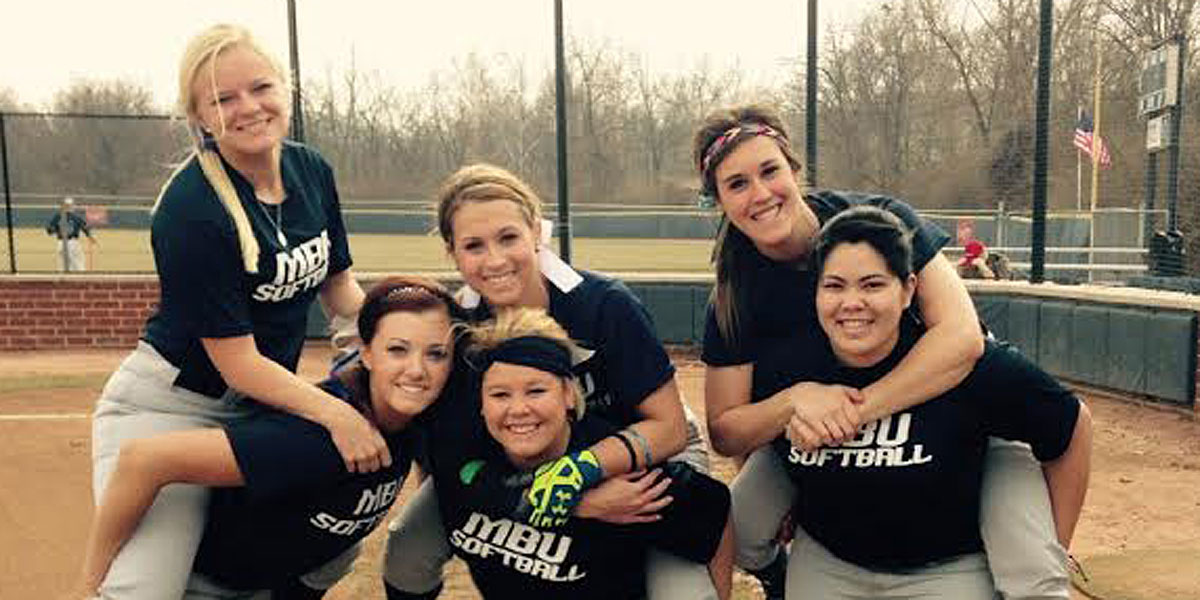 College is a time when athletes are given the opportunity to show their dedication and love for their sport.

When athletes are faced with their final season, there are various ways they can handle it.

The Missouri Baptist University softball team is fortunate to have six talented and dedicated seniors to help lead the way through the season.

Three of the team’s seniors have played at MBU for all four years of their collegiate careers, which for them has proved to be memorable and exciting.

“Softball has been more than a game for me, it was an escape from reality. This year, I want to have as much fun as possible and create memories that will last a lifetime,” Donyelle DeMarse said.

DeMarse, a designated hitter who is majoring in elementary education, is completing her fourth year at MBU.

She strives to keep others in a positive mindset in order to achieve the goals laid out for the season.

“We plan to have a winning season,” she said. “People need to take every opportunity they are given in order to do that.”

Leadership and dedication are both qualities the softball team focuses on achieving.

“I’ve learned that you have to work hard for what you want. Even when things get hard you just have to work harder,” said Jena Trombley, a senior majoring in communication studies who is also playing her fourth year at MBU.

Trombley is a pitcher with a current total of 28 strikeouts for the 2015 season.

Softball is a game of mentality. The right mindset makes a significant difference in the success of the athlete.

Athletes want to remember their final season as their best and it can be difficult to get past the pressure of wanting to succeed.

“It has a lot to do with last-chance opportunities and trying to take advantage of everything I can, without putting too much pressure on myself and making myself mess up,” said Mariah Randazzo, a senior majoring in biology who plays third base for the team.

Randazzo is a transfer from Three Rivers Community College who posted a .519 slugging percentage for the 2014 season at MBU.

According to Kelsey Snider, a senior business administration major at MBU, it can seem that time flies by, not leaving much time to enjoy something that has been a part of a person’s life for so long.

People grow to love what they do because of the amount of time they put into it.

“I am actually really sad to be a senior. I have played since I was 5 and it is kind of sad to think that it’s almost over and that I am never going to play competitively again,” she said.

Snider is a transfer from Three Rivers Community College who plays right field and currently holds a .323 batting average for the season.

Individuals look at their sport as a memorable time in their life as they are able to meet many people and make lasting friendships.

Being on a team can be a difficult task, however it takes maintaining good relationships on and off the field to make a team stronger.

“I want my senior season to be filled with laughter, wins, fun and friends that will remain my friends for life,” said Darrian Chrzanoski, a senior criminal justice major who transferred from Lincoln College.

All of the MBU softball seniors seem to have the same goals in mind, building a sense of unity, which can be the difference between success and failure.

Corey Pitchford, a fourth year at MBU who is majoring in health science, has high expectations for her final season and does not want to regret a thing.

“I really want our team to go all out this year and make it all the way. We have a great team and a great group of talented girls and I believe that if we give it our all, we can make a name for ourselves,” Pitchford said.

Pitchford plays second base for the Spartans and currently holds a slugging percentage of .667.

The team gained two wins against St. Louis College of Pharmacy increasing its record to 12-8.

The MBU softball team is living up to their expectations with a conference record of 7-3 placing them second in the conference.

The MBU softball team is eager to continue the season and will take on Lindenwood University – Belleville on Wednesday, April 8.

Sierra Thompson is an editor for MBU Timeline. She is majoring in communication studies and minoring in business administration. Thompson is a member of the softball team at MBU. In her free time she loves to travel, watch movies and spend time with her family and friends.