Caterina Cigarini has known for more than a decade that she would play competitive volleyball at a high level, and now the All-American spends most of her time taking what she’s learned from volleyball to guide her actions in the rest of her life.

Cigarini, 23, a senior sports management major with a business administration minor, pursued many sports as a child in her home town of Modena, Italy. 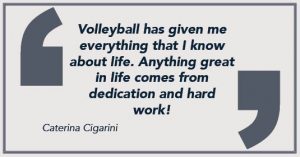 In fact, sports consumed much of her time as she was always an active kid. She swam, rode horses, participated in karate, gymnastics, skiing and tennis.

Although she stayed very active, she knew her passion for volleyball would be the foundation of her dedication and hard work that MBU has seen in her college volleyball career.

“There is nothing about the sport that I don’t love,” Cigarini said. “I love being part of a team, the competition and hard work. I love the environment and excitement around volleyball, especially where I am from.”

Cigarini said volleyball has left her with memories to last a lifetime, especially her time playing for the junior national team.

In the 2018-19 season, Cigarini made the NAIA Women’s Volleyball First Team All-American.

She’s thankful for the opportunities she’s been given through volleyball, like being named All-American, and has taken many lessons from the sport.

“Volleyball has given me everything that I know about life. Anything great in life comes from dedication and hard work,” Cigarini said in a text message. “Time management, willingness to sacrifice and mentality are all important lessons that I have taken from volleyball.”

Cigarini’s teammates know she leaves everything on the court, and they know she makes the team better overall.

Kamden Maas, 22, a junior biotech major from Carlsbad, California, said she respects Cigarini as a player because of her work ethic and commitment.

“Cate is an outstanding player,” Mass said in a text. “Every time she steps on the court not only does she tremendously elevate our team’s play but also sets a higher standard for everyone playing.”

Mass added: “She embodies the concept that volleyball remains a team sport and knows she could never accomplish her rewards without all of us.”

Cigarini said she shares the same respect for her teammates, knowing that she can always rely on them to have her back.

“The most rewarding aspect about volleyball is feeling the support of your teammates on and off the court because we are not just a team but a family,” Cigarini said in a text. 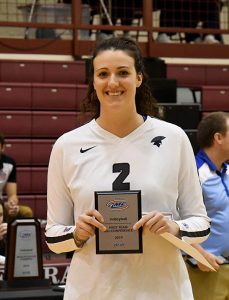 “Caterina’s best attribute is her determination during the matches. She stays focused and is ready to beat any competition that comes her way,” Bolton said.

“Everything I learned and improved here I owe it to Coach Nichols,” Cigarini said. “He recruited me … and believed in my potential. I like to say that he is my American dad because he didn’t just help me to improve on the field, but he taught me how to become a better person.”