The students of Missouri Baptist University are bringing to life “Junie B. Jones, The Musical,” based on a series of books which has won over 25 Children’s Choice Awards.

“Junie B. Jones, the Musical” is a student-led play with one faculty adviser to help oversee production. 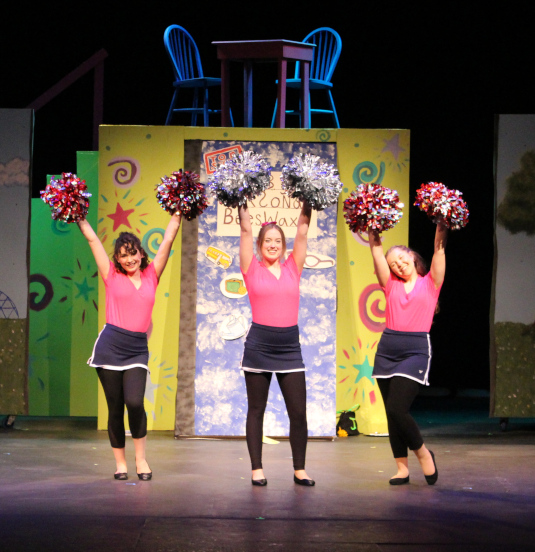 Students rehearse for MBU’s production of “Junie B. Jones, the Musical.”

Claire Baur, the musical’s choreographer, said students are getting out of their comfort zone with this particular piece.

“Initially, I was only interested in acting as a choreography apprentice as I have never choreographed for a musical before. I wanted to be able to watch and learn the world of choreography from a safe distance,” said Baur, a senior theatre major from St. Louis. “However, when I brought this idea to the Theatre Department’s director, Kasey Cox, she expressed she believed I would be capable to be the show’s official choreographer. I won’t lie, I was hesitant to accept. If Kasey had not shown faith in my ability to choreograph this show, I don’t think I would have been brave enough to try.”

Another difference in “Junie B. Jones, the Musical” from other plays is the Theatre Department’s partnership with Confluence Academy, a collaborative network of unique schools in an urban setting, aimed at “developing the whole child by providing experiences that require critical thinking, creativity and empathy to equip graduates to become leaders in a changing society,” according to their website.

The partnership is twofold in which MBU first hosts a book fair with 50 percent of the proceeds dedicated to Confluence’s three campuses, while also hosting 500 second- through fourth-graders from all three schools to watch the play at MBU.

“Some of the teachers are going to be coming by to pick out specific books for their classrooms, so we’ll have bins open. You can purchase specific books for their classrooms,” said Cox. “You can also just purchase a book that maybe you love from when you were a kid and we’ll have a bin at the front that you can purchase it and put it in there, and it’ll go to them just generally and they can decide where it goes.”

The inspiration of “Junie B. Jones, the Musical” goes beyond today’s children, as MBU’s own Junie B., Sabrina Furman, points out it is also meant to be nostalgic for the adults in the audience.

“We are all extremely ready for the children to experience this show,” said Furman, a sophomore speech and education theatre major from St. Louis. “I hope there will be children in the audience who are inspired by Junie B. Jones as well as adults that can remember what childhood was like.”

To purchase tickets and to view more information regarding COVID-19 guidelines, visit mbuboxoffice.eventbrite.com. 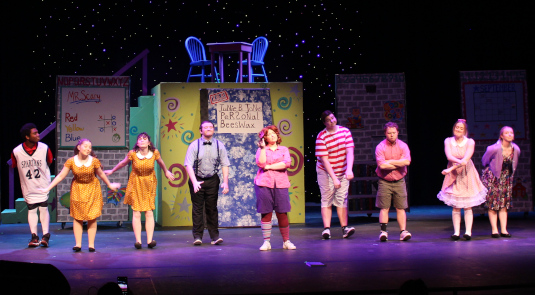 MBU students perform in “Junie B. Jones, the Musical,” which was choreographed by senior theatre major Claire Baur.