David Gregory wrote seven original songs over the past two years for his debut album, “Jesus Is Enough,” released Sept. 30, 2021, but his love for music began several years before that.

Gregory, a senior worship leadership major from St. Louis, discovered his passion for music and fascination with music theory at an early age as he would listen to music by Kirk Franklin and Kurt Carr with his mom.

“I have a lot of influences because music fascinates me,” Gregory said. “Obviously that’s going to bleed into the music I create and I’m not mad about that. I really respect gospel music. I love gospel music. I listen to it a lot. I wouldn’t describe myself solely as a gospel artist. I feel like my music gets into a lot of different styles. Gospel music has been an influence of mine and I think everything that I do, in some way, shape or form, no matter where it’s at or what context it’s in, will have at least a taste of that in it.” 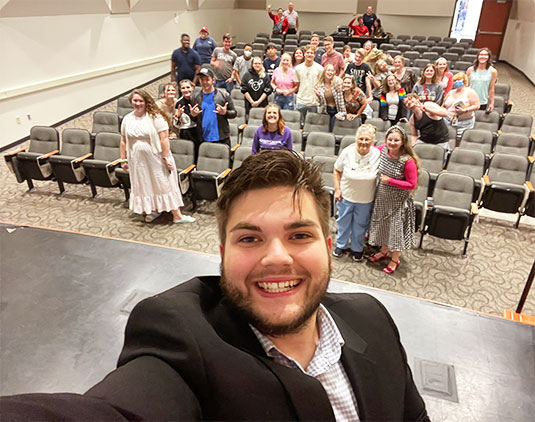 Gregory takes a selfie with the audience at the viewing party for his album in October 2021.

The first song of Gregory’s album, “God Is,” came from Gregory messing around on a piano and experimenting with choir-sounding music. With this song, Gregory didn’t want to focus only on the attributes of God, he wanted the lyrics to go deeper.

The second song on the album, “How Great,” was developed during a time of worship while Gregory was a student at Jefferson College.

Gregory said he believes the song provides unity to the singers when they worship, a unity that was emphasized with a featured guest in the song, Victoria Rose Gregory, who is David’s younger sister.

“We were able to come together and just really worship and to just give praise like we had done in music ministry before this,” Gregory said. “It is kinda that basic worship song but it’s also that song that churches need. And that just unifies the church. Everybody can sing, ‘How great is our God. How amazing is His love.’”

Victoria Rose Gregory, or Tory, was moved by being part of the song.

The title song, “Enough,” is the third song on the album. As the title implies, Gregory believes that Jesus is always enough, understanding the generation we live in seeks fame, love, attention, awards and dreams, but does not always rest in the satisfaction that is found in Jesus.

Gregory added: “After all your chasing is done, after you have gone out there and you have sought this and sought that, and you’ve wanted this and you’ve wanted that, Jesus is still enough for you. And I think when we rest in that and we realize that and put a priority on that, everything else in our life begins to fall into place. And it really comes back to honestly putting a priority where the priority needs to be.”

The next song, “Song of Job,” was written during the spring of 2021, a time in Gregory’s life when everything was good but then difficult challenges began rolling in like a seasonal storm.

Gregory felt God press on him to read the book of Job after a church service where he worshipped by singing “Blessed Be Your Name,” by Matt Redman, which is taken from the book of Job.

Gregory was brought to tears of worship after reading the first chapter, then he realized why the Holy Spirit pressed on him to read the book as he began to see door after door of opportunity shut in front of him.

“I will say that season was a really dark season of my life. But in that season I remained faithful and I still blessed His name and I still praised Him,” Gregory recalled. “Now as I’m in this semester I realize that so many of the doors that He closed, He was positioning me. So many of the doors that I’ve walked through this semester, I would not have been able to walk through if He had opened doors last semester.”

The result of this challenging season has been an increase in Gregory’s faith in God.

“It has really reinforced the idea of being faithful — being faithful when it’s hard, being faithful when you don’t seem like you have any reason to be faithful. … I have never found God to lie. I’ve never found Him to go back on His word. I’ve never found Him to not be what He said He was,” Gregory said. “Knowing that, I will bless His name. I will praise Him. I will rest in His promises even if it means that my heart is broken. Even if it means that my eyes are filled with tears. Whatever that may mean in that situation, I still know that He is good and I will rest in His goodness.”

Gregory placed the song, “You Give Me Joy,” right after the heart-wrenching “Song of Job” intentionally because he wanted to show how God gives him joy even though he has experienced difficult situations.

After losing some close friends and being left with questions and joylessness, Gregory asked God to be the source of his joy and God followed through.

“There just came a time when I said, ‘God I need You to give me joy because I have none,’ and slowly God began to be my joy,” Gregory said. “Also within that, He showed me that from that brokenness areas of my life that I needed to work on. If I had not worked on things and if I had not learned those lessons that I needed to learn, I truly believe that I would not have been able to thrive in Missouri Baptist University’s environment as much as I did.”

Gregory’s music has been impactful in his life and it has an opportunity to affect the lives of others now that the album has been professionally recorded and released.

“David was an excellent client to work with,” O’Neal said. “He had a specific vision and came into the studio well prepared every time, making the whole process a breeze.”

Recording “Jesus Is Enough” was a two-week-long process, which is actually fast for recording music, according to Gregory. He created resources, such as a scratch track and a beat, for the musicians to practice in rehearsals so everyone was prepared when it was time to record in the studio. During the recording process, the instrumentalists recorded their pieces in one week and all the vocalists recorded their parts the next week.

Even though the process was strenuous at times, Gregory’s desire to serve the Lord through music was evident to those he worked with closely.

“David’s love for the Lord shines through everything he does,” said O’Neal, who currently works for MBU in Special Events. “From the songwriting to his attitude walking through the door each day, it was always clear what this project was about and who it was for.” 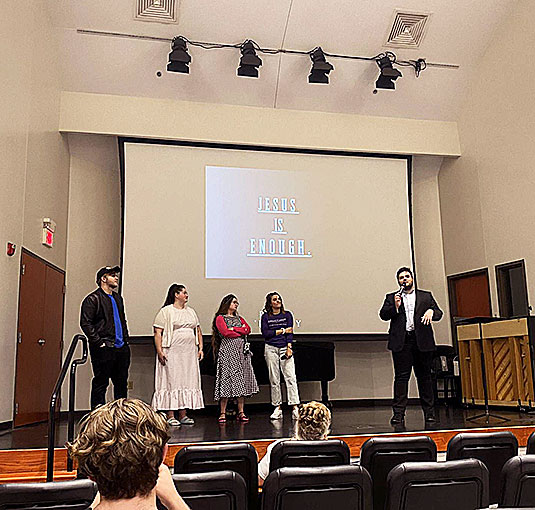 Gregory introduces Tory Gregory and Andrea Robb, who were featured vocalists on the album.