Saying the name “Macbeth” can give one chills going down their spine, since legend tells us saying the name in a theatre causes disaster. Missouri Baptist University is willing to put on this cursed production March 22-24 in the Chapel of the Fine Arts Center.

Daniel Dilworth, a sophomore majoring in theatre and broadcast media, will be taking on the lead role as Macbeth in the classic William Shakespeare tragedy first performed more than four centuries ago.

According to this superstition, Shakespeare actually got a few of his lines from an actual coven of witches. Once they saw the play, they didn’t like what they saw and immediately cursed it.

Another tradition tells us that the original prop master could not find a suitable prop for the cauldron, and stole one from a coven, who then cursed the play in revenge.

The final lore has Shakespeare himself cursing the play because then nobody else would be able to direct the play.

When Dilworth saw his name on the cast list as Macbeth, he was immediately humbled.

“This was … one of the most exciting moments in my life — this is the first lead role I have ever had and it is in one of my favorite Shakespeare shows,” said Dilworth. “There was also a sense of responsibility to the audience. I was given an opportunity to tell them a story that means a lot to me and I want to inspire this same love of Macbeth in everyone who comes to see it.”

Kasey Cox, director of the production, could not be more excited to showcase this cast’s hard work for everyone to see.

“We try to make sure that every theatre student has the opportunity to perform in a Shakespeare play before they leave MBU, and we have a couple of students who are seniors this year who have not done Shakespeare with us yet,” said Cox. “Macbeth has always been a personal favorite of mine, and it seemed like the right time to tackle it.”

Eliana Steele, a transfer student majoring in theatre with a minor in accounting and business administration, was thrilled to learn she had landed the role of Lady Macbeth.

“I was, and still am, ecstatic. Studying this play in preparation for auditions, I was really drawn to Lady Macbeth,” said Steele. “She’s a fascinating character, an incredibly human character, and I’m so honored to get to portray her and explore her story.”

Looking at the plot line, in a post-apocalyptic world a brave general receives a prophecy that one day he will become king. Consumed with ambitious thoughts and spurred to action by his wife, Macbeth seizes the throne and becomes a tyrannical ruler who is forced to commit terrible acts to protect himself from enmity and suspicion.

But what about this legendary curse? Since Shakespeare’s play “Macbeth” is said to be cursed, actors avoid saying its name when in the theatre. However, the name Macbeth is allowed to be said aloud during the actual production.

“I know that I am not supposed to believe in the curse, but better safe than sorry,” said Cox. “I have worked on several productions in which the title of Macbeth was spoken carelessly in which we have experienced a variety of bizarre mishaps. This, of course, could all be coincidence, but isn’t it more fun to believe that it’s not? Imagination, and superstition, are an integral part of life in the theatre.”

The most common remedy to rid the curse is that the offender — that is, anyone who lets the word “Macbeth” slip out — must step outside, turn around three times, spit, and say the foulest word he/she can think of, and then wait for permission to re-enter the theatre.

Hearing these silly legends about a curse does not bother Dilworth as he believes the production is anything but cursed.

“I think the curse is a myth that is a result of superstition and coincidence,” said Dilworth. “I guess we will see if it’s real soon enough because I yelled the name ‘Macbeth’ on stage last semester while we were working on ‘Shrek: The Musical’ numerous times.”

Steele has also been informed of the mysterious curse from about four different people, but has her own opinion of saying Macbeth out loud.

“Usually I try to not say ‘Macbeth’ inside the Chapel, mostly for tradition sake, but I often forget and say it anyway,” said Steele. “So if the set collapses and the building burns down on opening night … that’s my bad.”

So far rehearsals have been going well, and lines are coming out so naturally. The production team and cast are ready to put on this show.

“We have a stellar cast and crew who are devoted to this story. I have directed over 35 productions and I don’t think I’ve ever worked on a show in which every person participating is as excited about the production,” said Cox. “The level of care and craftsmanship going into the production is on a different level from anything I have worked on before.”

To really get into your role, you have to know what the production means to you.

For Dilworth the show means a lot because this is his first lead role and his first role in a Shakespeare show. He is taking on a lot this semester. 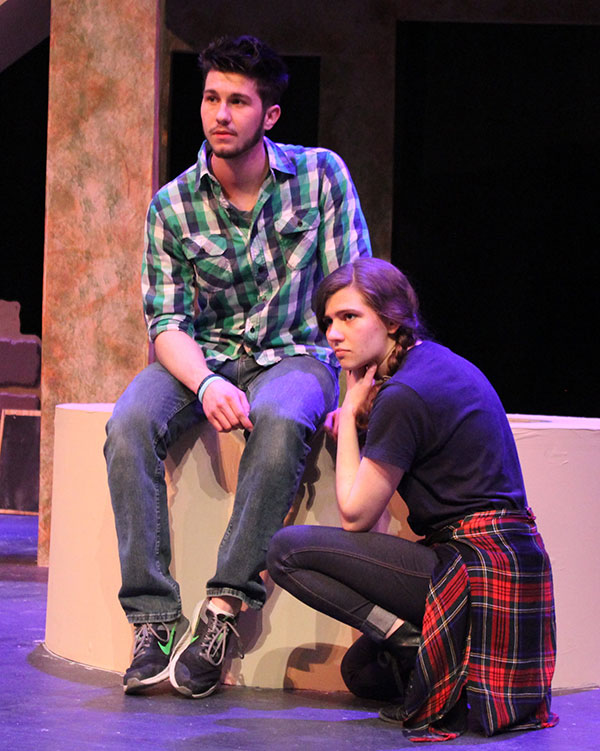 “I am beyond thrilled to be playing such an interesting character. Macbeth is a character that inhabits the gray area between being a villain and being a tragic hero,” said Dilworth. “In addition, the vision for our production is different from any other version of Macbeth that I have ever seen, but it is one of the most exciting concepts for the show I have ever heard.”

Director Cox has decided to take the production into a different direction than how the show would typically be performed.

“Macbeth has traditionally been told as a story about how an unquenchable thirst for power can lead to a person’s downfall. This is definitely a major theme of the play, but I wanted to bring out a different aspect of the story,” said Cox. “We want to examine the idea that, under the right circumstances, anyone is capable of what Macbeth does. It does us no good to sit back in a theatre and say, ‘That character is terrible and he deserves everything that has happened to him.’ It’s better to say, ‘I see myself in him, and how do I make sure that I never reach this point?’”

This will be the first show Steele has done at MBU, and she has a true love for Shakespeare.

But for Steele the production is more than just a play. A transfer to MBU from Saint Louis University, Steele said her decision to change universities was perhaps part of a higher calling.

“This production has been an important part of what God has been doing in my life recently. A year ago, I hadn’t even considered transferring schools halfway through college and I felt that I needed to let go of the idea of pursuing theatre,” said Steele. “So it’s been both strange and exciting to see how God has brought me to this school and blessed me with the opportunity to be in such a wonderful Theatre Department and play this character. He’s always faithful to grow us in Him and teach us to trust Him more; I just never dreamed He would do that by leading me here.”

Opening night is this week, and cast and crew are most excited to show what they have been working so hard on.

Dilworth is excited to share this beautiful creation with the audience.

“Dozens of people are a part of making this show a success and we all spend countless hours in order to bring this story to life and to be able to share it with others,” said Dilworth. “This show is like a child that you pour time, money and effort into and then you send it out into the world, not knowing exactly what will happen but hoping that everything you poured into it will be enough.”