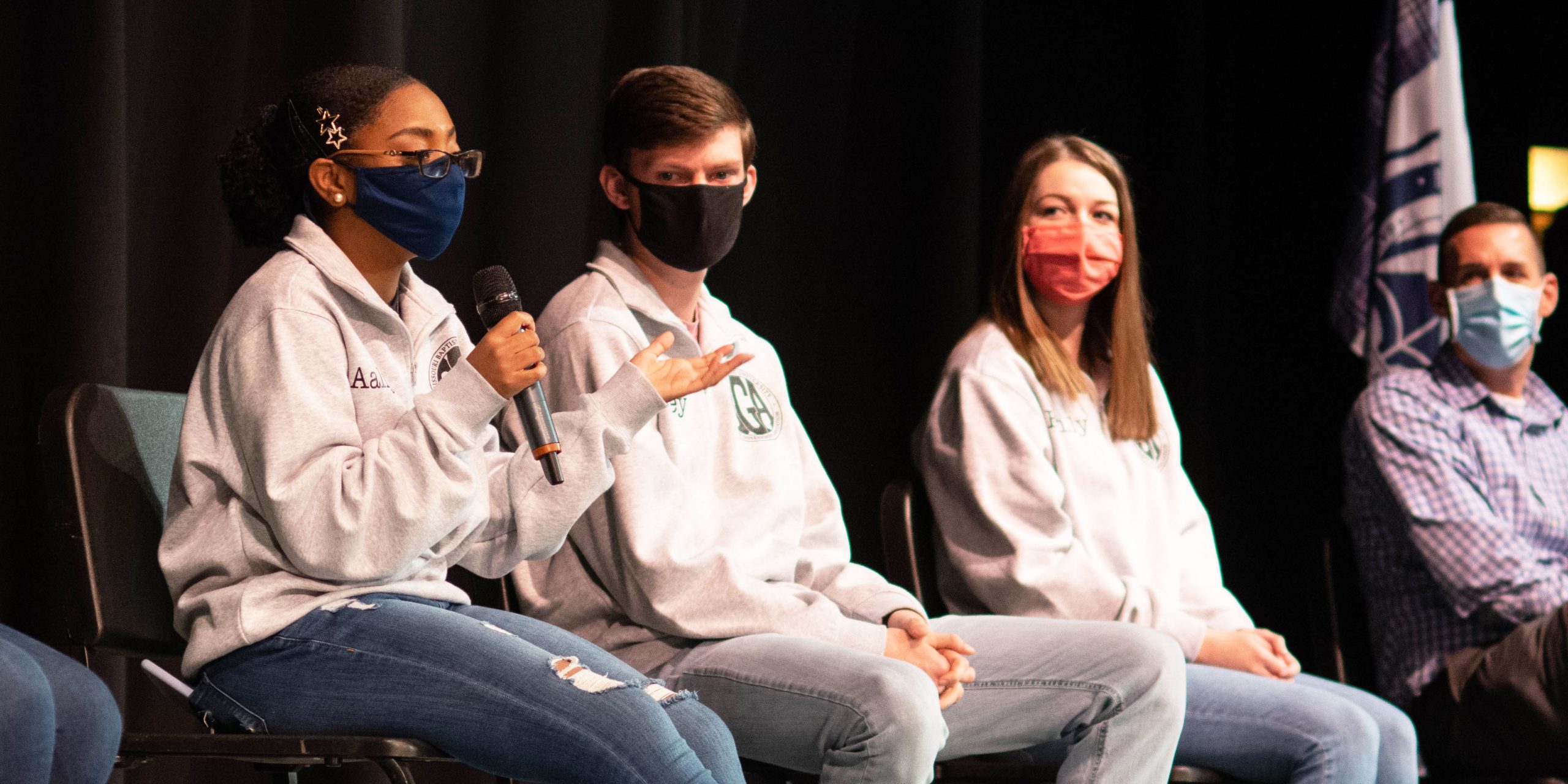 For the first time at Missouri Baptist University, the student body elected the president and vice president of the Student Government Association this year, and it was not the only change brought to SGA.

Through the leadership of President Aaliyaha Gladney, a junior health sciences major from St. Charles, Missouri, SGA has a newly restructured executive board and purpose.

“I wanted to actually do something about the things that I felt should change on campus,” Gladney said.

In order for the restructure of SGA to be successful, Gladney needed a running mate. A friend of Gladney’s approached Kolby Matsushima, a senior psychology major from Kaneohe, Hawai’i, to consider running with Gladney. Later, Gladney herself asked him to run with her, and he eagerly filled the role.

“And we talked it through and I asked for some time to think about it. I thought this campus could use a little improvement and I thought Aaliyaha had some very good points that I was on board with, that I could support her in,” Matsushima said. “So I decided to run with her.”

Matsushima and the other two presidential candidates presented speeches at the end of Chapel on Feb. 27, 2020, to promote their campaigns. Gladney and Matsushima ran with the slogan, “You speak. We listen.”

“Each and every one of us students has a voice and a right to be heard. And Aaliyaha and I both want to serve as your ears and your mouth. Our hope is that we can serve this student body by listening to your concerns, suggestions, wants and needs, and present that to our administration, and vice versa,” Matsushima said. “Aaliyaha and I both want to get to know more and more students around campus and develop real relationships with people, and start opening up communication with everyone.”

By developing relationships with the students they represent, Gladney and Matsushima believe they can bring the students together to form a student body that is proud to be part of the MBU community.

Gladney and Matsushima’s campaign strategy resulted in their election, which was announced on Feb. 28, 2020.

Gladney and Matsushima have been closely working with the MBU administration, especially Dr. Ben Lion, vice president for student development and dean of students.

“I see my role as SGA adviser to invest in their potential and help align their strengths with the vision they have as a leader for students,” Lion said via email. “Additionally, I work to ensure there are opportunities for SGA to interact with different levels of administration and have a ‘seat at the table’ as other university leaders discuss the student experience so SGA can have a voice on behalf of all students.”

The student body electing the president and vice president wasn’t the only change made to the structure of SGA.

“Under Aaliyaha and Kolby’s leadership, who worked with the previous president and vice president, [they] have developed the starting framework to expand opportunities for students to serve in a variety of senator positions that represent and advocate for students,” Lion said. “The purpose of SGA is to advocate on behalf of students in order to enhance the student experience while working in collaborative partnership with university administration.” 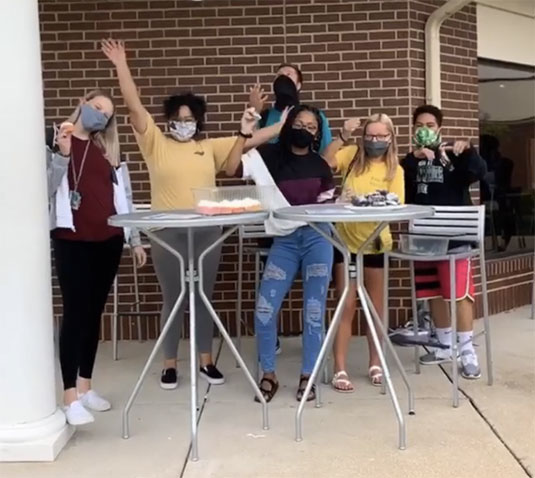 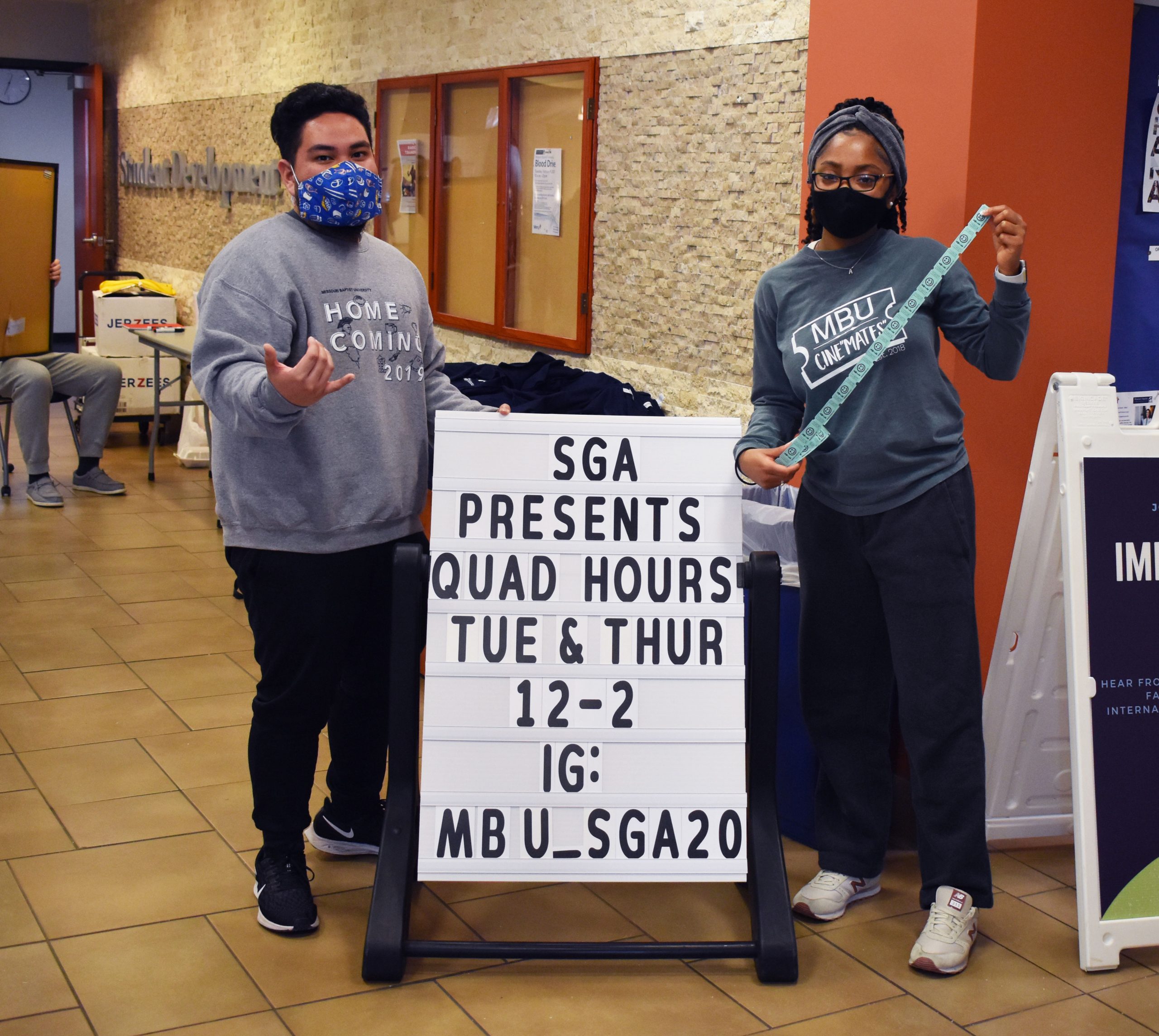 Kolby Matsushima (left) and Aaliyaha Gladney (right) welcome students to Quad Hours. The SGA executive board hosts Quad Hours on campus to build relationships with the students they represent.     Photo by Emily Heflin

Gladney and Matsushima selected five senators; Riley Cantrell, Sami Haynes, Elyse Lewis, Brent Seyer and Mikayla Williams, in addition to a chief of staff, Jada Jones, and a director of communications, Emily Heflin, to serve on the SGA executive board.

The mission of “You speak. We listen” is shared with all members of SGA.

“I loved that Kolby and Aaliyaha ran on the idea of ‘You speak. We listen,’ and I was really excited to be a voice for the campus,” Williams said.

The senators have been actively working to be present around campus to talk to students and administration about life around campus.

“I mainly relay information to the rest of SGA of what I have heard from other students about what should be changed on campus. We meet once a week and discuss what we have heard from other students, what we have noticed while on campus and what we can do to change those things,” Williams said. “We have been working diligently in the past couple of weeks to try to reach out to each different branch of staff. Each senator took a group of students or faculty and it was their job to reach out to them to find out what they wanted to be changed at MBU.”

In addition to the new structure of SGA’s executive board, SGA has a new responsibility and a more defined purpose to advocate for students.

“This year there has been a shift in all the SGA positions to focus more heavily on understanding the student experience and then advocating on behalf of students over doing student activity, like programs,” Lion said.

One student who is especially passionate about advocating for students is Jones.

“I was motivated to get involved with SGA because I saw the need for representation of students at MBU. … I wanted to be part of the change that MBU needed. I joined SGA because their leaders were passionate about prioritizing students’ voices,” Jones said. “A responsibility of all SGA members is to foster community. By that I mean SGA members have relationships with students and are active parts of the MBU community. Because of these friendships, we get to have conversations about campus life and learn what the students need.”

To help build relationships with the students they represent, SGA hosted Quad Hours Mondays through Wednesdays during the fall semester and Tuesdays and Thursdays during the current spring semester.

SGA also hosted a town hall meeting for students to come and express their questions and concerns in a more formal manner. SGA also regularly promotes other events on campus to help build the MBU community.

“I love helping people and getting to know people. In SGA I’m at the advantage of doing that every time we see doing something together,” Gladney said.

SGA meets with Dr. Lion on a weekly basis to discuss the concerns among the student body.

“I really like being able to be that middle person between students and administration,” Matsushima said. “You get to see multiple sides to things, as opposed to just being a student where you may only see things from one side. I like being able to get perspective from both and trying to better explain to each opposite side what is going on. It’s not just, ‘Here’s what’s going on,’ but, ‘Here’s why.’”

Lion encourages students to get involved in SGA.

“SGA is an opportunity that challenges a student to grow in a variety of soft skills that are highly relevant for your future vocation and leadership opportunities,” Lion said. “Leadership positions allow a student to practice skills like listening, speaking, writing, healthy conflict, advocacy and many more, within a safe environment designed to invest in the person as they develop.”

To learn more about SGA or to formally contact Gladney, Matsushima and the executive board, visit their Instagram page.