Fitness trainer Kris Kalmese discusses a better way of living a healthy lifestyle, one that incorporates eating right and working out. 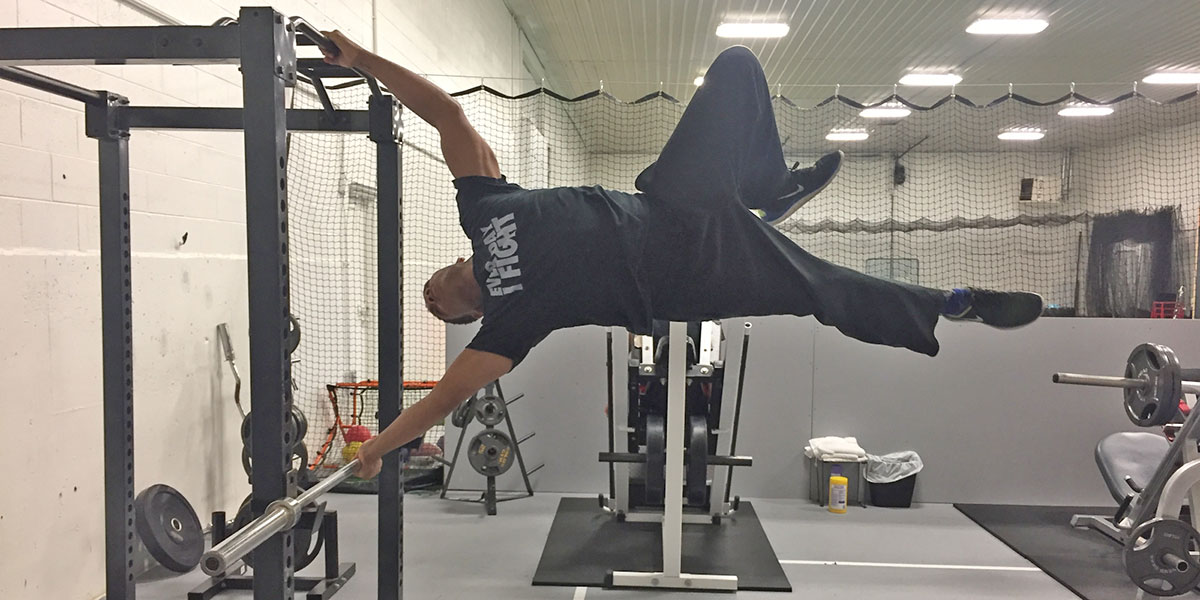 Kris Kalmese, a fitness trainer, demonstrates a flagpole hold at his gym in Bourbonnais, Illinois.

For some, working for a healthier lifestyle may be as simple as seeing how much they can bench press and consume as many protein shakes and animal products as possible.

To Kris Kalmese, a trainer with a facility in Kankakee County, there is much more to a healthy lifestyle than lifting heavy and consuming “carcasses.”

While he trains about 53 people at his facility, he has also given speeches about health and wellness, led groups such as fire departments and taught different youth groups different ways of exercising.

The same way other individuals choose their career because of needing something in the past that another provided, Kalmese’s selection of his career went the same way.

“I was raised in a very difficult situation, and it became very obvious at a very early age that I was going to need to become strong in order to survive a lot of what I was enduring,” Kalmese said. “Over time I realized that my mentors who led me along my fitness journey were definitely onto something significant, so I decided to create my own method of guiding troubled youths.”

So what separates Kalmese from other trainers?

One way is his method of training his clients that most people may find somewhat peculiar at first.

Kalmese believes he can offer something most trainers can’t.

“I train in ways that clients have never experienced before, by training in different ways every single day,” Kalmese explained. “No one really knows what to expect every day, but I still carry out a semi-traditional muscle group training pattern.”

Kalmese also said some trainers are so fixated on getting their clients stronger that they overlook the importance of stretching.

Kalmese trains a variety of people, including high school and college athletes, youth and the elderly.

“I feel Kris is a leader and will not only help kids become better athletes but all around better people,” Harris said. “Other trainers don’t take out their time to do it like that. Kris isn’t just in it for the money.”

Harris also feels that working out with Kalmese has seriously elevated his performance on the football field.

Kalmese, who usually incorporates some sort of endurance with his workouts, not only inspires people to work harder in the weight room, but by the time he’s done with some of his clients several of them wind up eating healthier.

Gary Pendleton, a basketball player from Lincoln University who is trained by Kalmese, said, “I’ve changed my diet several times but overall I’m eating way healthier than I ever have in my entire life.”

Kalmese said he believes that eating animal products is totally unnecessary for gaining strength and a plant-based diet is best.

“You do not need meat to gain muscle, live, improve health or athleticism,” Kalmese said.

While some may not realize why meat is unhealthy, there are quite a few reasons that it shouldn’t be consumed, one being the damage it does to the environment.

According to Kalmese, the process used to prepare meets emits the majority of carbon dioxide in our atmosphere.

Outside of the fact that we biologically aren’t designed to eat meat, most food poisonings come from consuming meats.

Besides the fact that eating meat is unhealthy to the human body, Kalmese believes it is morally unethical to consume animal products.

“The fact that animals are sentient beings and that we are able to recognize the signs of their sentience, but somehow, we deem some animals less worthy of the rights of life despite the fact that those animals are more intelligent and emotionally expressive than the ones we call pets,” Kalmese said.

While his customs may seem somewhat unique to the vast majority of people, they clearly have proven to be quite effective.

While this may seem to be one of his greatest achievements as a trainer, he insists that some of his most successful accomplishments are too private for client involvement.

Despite the challenge of finding new places to train his clients, Kalmese has been very successful with reaching out to new people.

“The best place to train, no matter where training takes place, has always been the place where the trainer is the most focused and the most well studied,” said Kalmese.