As the fall 2021 semester continues, MBU Theatre has been hard at work rehearsing for their upcoming musical, “Seven Brides for Seven Brothers,” which opens Thursday, Oct. 28, and runs through Sunday, Oct. 31, at the Pillsbury Chapel.

This romantic comedy, which runs 7:30 p.m. each night and 2 p.m. Sunday, provides a look into the lives of seven unruly brothers who live on the Oregon Frontier. They all share the belief that men know what a woman’s place is in life and how to keep her there. 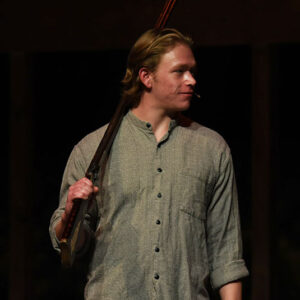 Will Launsby holds a rifle as he plays the character Caleb in “Seven Brides for Seven Brothers.” 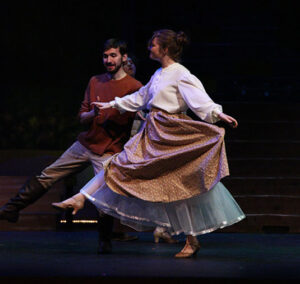 Nathanael Pezzo and Claire Baur dance to one of the many songs in the musical.

According to Music Theatre International, this “battle of the sexes” is based on the book by Lawrence Kasha and David Landay. With music and lyrics written by Gene dePaul and Johnny Mercer, this musical adapted for the stage from the 1954 movie of the same name has been enjoyed by people all over the country since 1982.

“I would call ‘Seven Brides for Seven Brothers’ a celebration. It’s filled with larger-than-life characters, dance numbers replete with acrobatics, ax jumping and arm wrestling, and a soaring score that transports you back to the Golden Age of Musical Theatre,” Director of Theatre and Dance Kasey Cox said in an email. “As for this production, I would call it a culmination of the tireless work of our students, staff and faculty who are ever committed to taking MBU Theatre to the next level of performance. This is a show for the MBU history books and I am excited to share it with our MBU family.”

General admission is $18 and $5 for students and children. Tickets are $10 for faculty, staff and alumni, and $15 for seniors.

For more information and to purchase tickets for “Seven Brides for Seven Brothers,” visit mbuboxoffice.eventbrite.com. 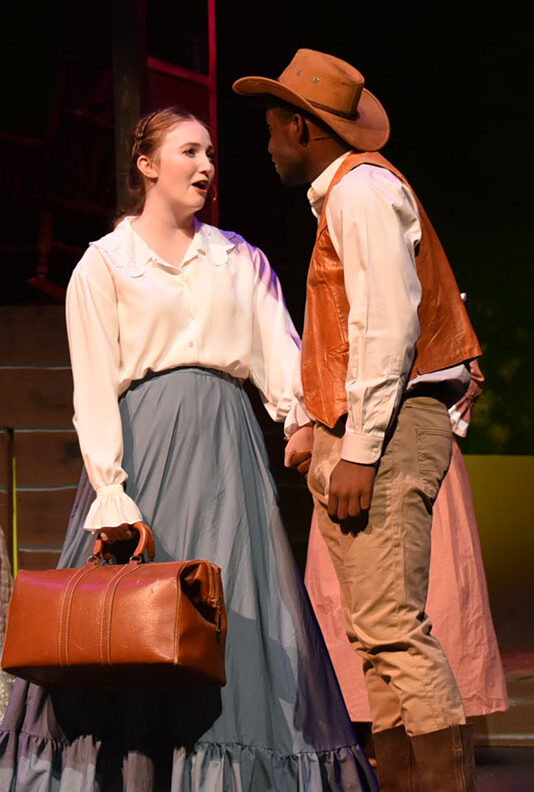 Kaylin Penninger sings with Greg Carr II in their performance of the lead characters named Millie and Adam.