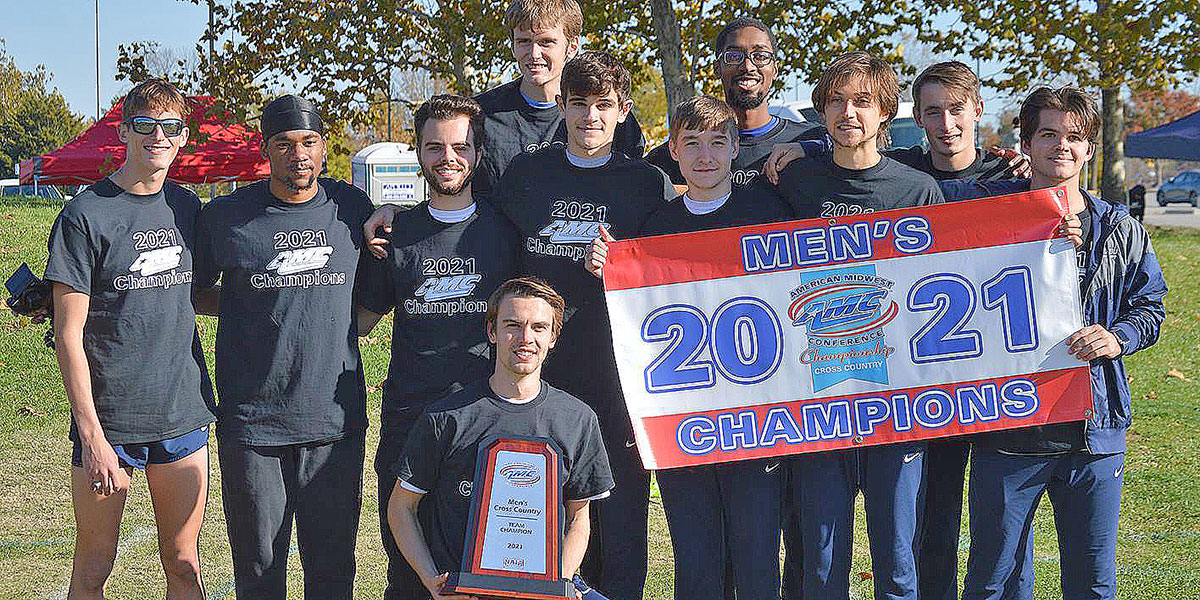 With four MBU runners appearing in the top 10, the men’s team earned 39 points, ending the meet 11 points ahead of second-place William Woods University, which closed the day with 50 points to take second, and Columbia College in third place with 65 points.

In cross country the goal is to accumulate fewer points because each runner’s placement in the race adds points to the overall team score. For example, first place results in 1 point, while 10th place would add 10 points, so the lower the overall score, the higher the team’s rank in the meet.

“I knew we had a chance to [win], but I knew that two other teams — William Woods and Columbia College — also had good teams,” said head cross country coach Brennan Cape, who has been coaching the team since August 2019. “In the back of my mind, I thought it was a possibility, but I also wouldn’t have been that surprised had one of those two teams done that.”

The pack of Spartan finishers began with Donovan Denslow, a newcomer to MBU this year following his transfer from Mineral Area College.

“It went really good at first, but towards the end, I started to die off and, mentally, I just gave up,” said Denslow, a sophomore physical education major from Eoila, Missouri. “I really am glad that we made it as a team because we didn’t go to Nationals as a team since like early 2000s.”

The fourth Spartan to cross the finish line was graduate student Trey Peugeot in 8th place with a time of 27:18.29.

MBU’s fifth runner, freshman Elijah Bullock, finished in 15th place (27:59.06), emphasizing his place on the team after missing part of the season due to a concussion.

“[The concussion] kind of smartened me up a bit and pushed me to focus on my training and stop being mediocre,” said Bullock, a freshman fitness management major from Bunker, Missouri.

Although not expected to win that fateful Friday afternoon, the men’s team held their own among fierce competition in William Woods University, based in Fulton, Missouri, and Columbia College, based in Columbia, Missouri.

“I was surprised by how easily we won. That’s how good our men stepped up and raced that day,” said Cape.

William Woods and Columbia College both had exceptional men’s teams this season, pushing the male Spartans to run their hardest and perform when it mattered most.

“It takes talent. There just hasn’t been enough talent in the program for the last 15 years, I would say to win the conference meet, we had some people who maybe weren’t expected to be that great but really worked hard and got a lot better,” Cape said, “and that really is what sealed the deal for us this year.”