The Missouri Baptist University baseball team is not generally accustomed to losing very many games, so this season required some early season adjustments as they got off to a rocky start but are now proving that it’s not how you start, but how you finish. 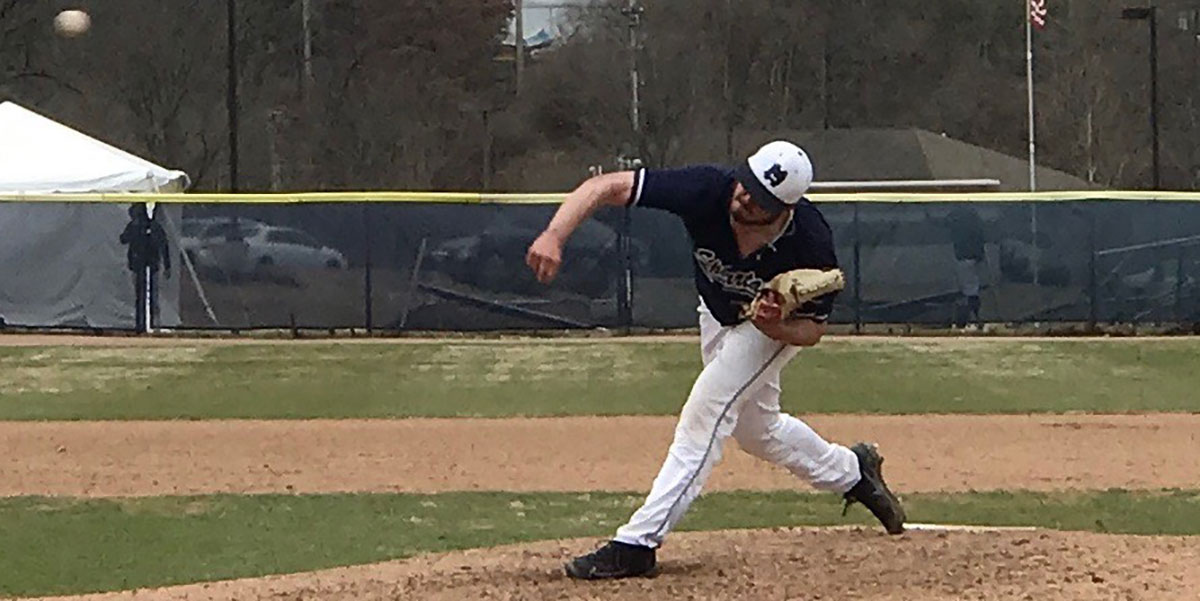 Missouri Baptist University pitcher Gary Watkins, a junior from Big Springs, Texas, and transfer from Navarro Junior College in Corsicana, Texas, hurls one to the plate during a recent game.

“It’s not whether you get knocked down, it’s whether you get up.” A quote from the great Vince Lombardi helps tell the story of a once-battered Missouri Baptist University baseball team.

The Spartans, coming off an NAIA World Series run, found their sky high expectations apparently crashing down after starting the 2018 campaign 0-6.

“The first weekend was a punch in the mouth,” said senior catcher Tommy Nawa. MBU traveled down to Lawrenceville, Georgia, in late-January where the Georgia Gwinnett Grizzlies swept them in a three-game set to begin the year.

“This is the first time starting in the last week of January. We just weren’t ready,” said Coach Eddie Uschold.

Figuring out the right roles is tough for any team at the beginning of the year, and players were also “trying to figure out what it means to play baseball at Missouri Baptist,” Uschold said.

The Spartans traveled to Pulaski, Tennessee, the next weekend, Feb. 2-3, to play Martin Methodist, where they were swept in convincing fashion, 6-2, 9-7 and 10-3. For the first time as the coach of MBU baseball, Uschold found himself 0-6 to begin a season.

There was no sense of panic for the club, though. Uschold brought the coaches together to make sure nobody was talking about the 0-6 start. “Once the coaches start panicking, the players start to panic,” said Uschold.

The unwavering confidence of their leader clearly poured into the players. “Collectively we came together and rallied around each other,” said Nawa.

Uschold added: “The great thing about baseball is there’s always another game.”

The players took this confidence with them onto the field, and the wins started pouring in.

The Spartans woke up in Point Lookout, Missouri, taking three of four against College of the Ozarks and Mount Mercy over a two-day span. They supplemented that with an 11-game winning streak a few weeks later, from March 2 to March 23.

“It was really a wake-up call for a lot of our guys. These guys have responded really well,” said Uschold.

Gary Watkins, a junior from Big Spring, Texas, and Caleb Dean, a junior from Kileen, Texas, have since been lights out from the bullpen, locking games down if the starter cannot finish the job.

Mason Washington, a transfer from Modesto Junior College who was not sure he would travel with the team before the season, has been a huge spark in the offense. He currently leads the team in doubles, RBIs and batting average.

“Everything is line drives, the other way, up the middle, he’s a tough out,” Uschold said of his four-hole hitter.

Since the 0-6 start, MBU baseball won 19 of their next 26 games to thrust themselves back into the playoff conversation.

“We know what we are capable of, never a doubt in our capabilities. Control what we can control and win every pitch and be locked in. Make things happen instead of expecting them to,” said Nawa.

The MBU baseball team easily could have collapsed after starting 0-6, but now the Spartans look forward to continuing success this season.

“We can’t look at what’s ahead of us, we just have to take full advantage of what we are facing each and every day. Take it day by day and win every day and we will end up where we want to be,” said Nawa.

The Spartans have 11 games remaining in 2018 and have their eyes set on the AMC tournament that begins on May 2.