The Missouri Baptist University women’s lacrosse team started its season off with a struggle under new coach Lindsay Carlile, beginning with four consecutive losses before finally picking up a win against Clarke University March 10.

The team then headed to Michigan during the university’s Spring Break for a tough game against Aquinas College on March 12. The Spartans held out for almost the entire game, but the Saints snuck in two goals during the end of the second half to come out on top, 17-12.

After dealing with a few games being rescheduled due to poor weather conditions, the Spartans faced off against the University of St. Mary Spires on March 23.

The two teams went into battle during this rainy game, ending in an 8-8 tie that pushed the game into overtime.

Finally, in quadruple overtime, Grace Adams managed to score the winning goal of the game after being fouled by the Spires goalie.

The dramatic 9-8 win against St. Mary’s began the Spartans’ four-game winning streak as they went on to beat Saint Ambrose University, Ottawa University and Lindenwood University-Belleville.

The players who shined the most during these rainy games were sophomore goalie Kaitlin Mills, sophomore midfielder Laura Ebers and senior midfielder McKenna Fisher.

Mills leads the NAIA in goals saved per game, ranking her as the No. 1 goalie in the NAIA.

“I feel I’ve worked the hardest this year than I ever have in my entire lacrosse career. Being No. 1 doesn’t mean that it ends here. I still look to my coaches and ask, How can I be better?” said Mills. “It all starts with why you play. When you play for something higher than yourself, that is when you get the best results, and that is why I play, for Jesus first.”

Mills takes her passion for Christ seriously on the field and off the field, making MBU the perfect place for her to further her career in lacrosse.

Ebers, one of the starting attackers on the team, has managed to score 32 goals this season. She scored 9 of the 17 goals against Clarke, her most in one game this season.

Ebers has also been named as Spartan Athlete of the Week and leads the team in total goals scored by a player.

One of the most competitive players on the team, Ebers plays through her injuries and proves herself as a fierce competitor on the field.

“I play for myself. I do not let the little things get to me. That way I can focus on the bigger picture and grow as an athlete at every practice and each game,” said Ebers.

Fisher is also a leading goal scorer for the team. The senior midfielder has managed to score 20 goals so far this spring. The Texas native has proved to be a force on the field, leading the team in draw controls. 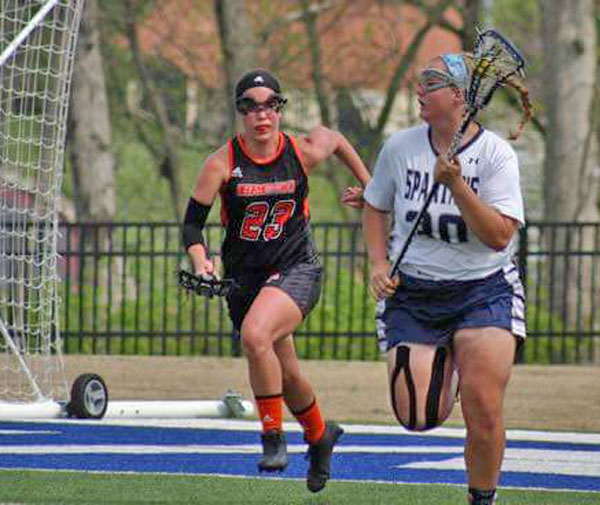 “This will be my last year playing college lacrosse with all my friends before I move back home. I want this season to be great,” said Fisher. “The team has definitely improved as the season’s gone by. I am glad to see us grow with a new coach.”

The women’s lacrosse season is now winding down as the Spartans only have two games left before the season finishes up.

The team faces Lindenwood University-Belleville on Thursday, April 12. The Spartans fought it out against the Lynx in the last game between the two competitors, and hopes to end the season undefeated against them.

Three members will be graduating this year as seniors Jalia Brooks, Madison O’Brien and McKenna Fisher will play their last game at MBU.

Other players will be leaving the team also. Laura Ebers, Katherine Coulter and Katie Pilla will also play their last games at MBU on April 21, as they will be transferring to different universities in the fall to pursue their careers.

Carlile has done heavy recruiting to replace the athletes who will be leaving at the end of the season. New additions to the women’s lacrosse team include young women from Hazelwood West High School, Rockwood Summit High School and Westminster Christian Academy.

These new additions will allow the women’s lacrosse team to continue growing under its new head coach, and hopefully bring the team to a National Championship in the following seasons.