The Lumineers’ latest album, “III,” released in September 2019, continues to cement the band as a mainstay in the somewhat niche indie genre and is another example of the band’s ability to blend folksy musical standards with their own artistic vision and storytelling.

“III” is, quite fittingly given the title, the band’s third studio album. It peaked at No. 2 on the Billboard 200.

Along with album success, the group has had three songs chart within the Top 100, with one, “Ho Hey,” reaching the Top 10.

With this newest album, the Lumineers seek to bring their listeners on a compelling journey through several generations of a family’s complex history.

Each one of the 10 tracks featured on the album tells a section of the Sparks’ family’s lives, serving as individual vignettes while also weaving a cohesive story across the entire album.

Four separate generations of the family are explored while themes range from the corruptive destruction of addiction, dreams deferred, and dealing with issues that can arise from a broken family structure. 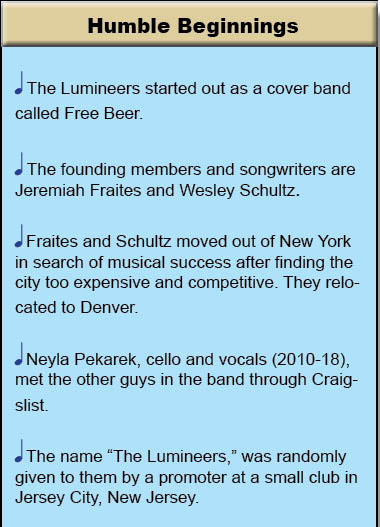 The first three tracks on the album focus on the life of Gloria Sparks, a woman who is tortured by her alcoholism and her lost life outside of her hometown.

The first song, “Donna,” introduces Gloria, her family, and her personal struggles, a strained relationship with her mother and her addiction to alcohol.

Gloria is fleshed out more in the second track, “Life in the City,” as she has moved away from her small-town home and is trying to make it in New York City.

The longing for a new life away from her upbringing is highlighted by the song’s throaty pining vocals.

The final song in the Gloria triumvirate is the album’s most popular song, “Gloria.”

The upbeat tone of the music and vocals are contrasted by the much darker and serious lyricism of the song, detailing in particular Gloria’s battle with alcoholism and the effects it has on those around her.

Lines such as, “Gloria, you crawled up on your cross / Gloria, you made us sit and watch,” get to the heart of the issue and showcase the double-edged sword of addiction, which harms both the addict and loved ones around them.

After that, the final seven tracks focus on the next generations of the Sparks family, Gloria’s son, Jimmy, and his own son.

“It Wasn’t Easy to Be Happy for You” and “Left for Denver” are both explorations of Jimmy’s son, Junior, and his personal problems dealing with loneliness, his lack of a mother and his father’s own problems with addiction.

Sandwiched between these two songs is “Leader of the Landslide,” another example of strong lyricism that deals with hard-hitting themes.

The song deals with the introspective discovery for Junior that his father’s own addictive tendencies and lack of responses to them are what drove his mother away.

Lines such as, “She left, she left, the writing’s on the wall / Please believe me, I smell the alcohol / The only thing I know is that we’re in too deep,” hammer this point home.

The album then takes a departure from the narrative it has been showing, Junior’s, to give Jimmy’s perspective.

“My Cell” describes how Jimmy’s hedonistic lifestyle might look inviting and entertaining, but it is actually a prison he cannot escape.

Jimmy’s inability to deal with his own demons is again addressed in another of the album’s stronger tracks, “Jimmy Sparks.”

The song details what events transpired to bring Jimmy to the low point he is at now; after his wife left him and he lost his job, Jimmy resorted to gambling to pay his son’s medical expenses.

This foray into gambling led to an addiction that fostered other problems and led to Jimmy being physically beaten by his loan sharks.

The low point of the song, though, comes at the end when his own son doesn’t recognize him and leaves him behind, “His old man waved his hands with tears in his eyes / But Jimmy’s son just sped up and remembered daddy’s advice / No, you don’t ever give a hitcher a ride ’cause it’s us or them.”

The next song, “April,” is a short instrumental piece that leads into the album’s final track.

“Salt and the Sea” is a somber track that closes out the album describing the inevitable connection between family despite the brokenness and hurt caused by the addictions.

The album traverses multiple characters’ lives and tells many stories but manages to stay true to the central themes of broken family relations and the pain that springs from addiction. 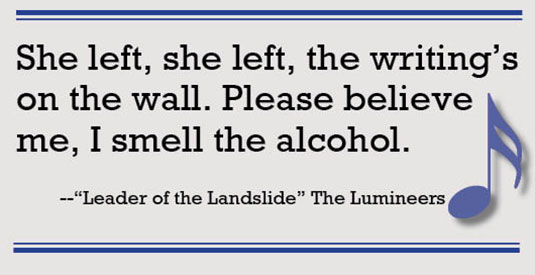 While some of the deeper and more potent lyrics are sometimes hiding within more upbeat instrumental backings, this only goes to further the messages that the band is hoping to get across.

In a time when, for the most part, artists have abandoned narratives and structures that underlie entire albums, the Lumineers take their listeners through a melancholy emotional experience in 10 tracks.

Tags: "April", "Donna", "Gloria", "It Wasn't Easy to be Happy for You", "Jimmy Sparks", "Leader of the Landslide", "Left for Denver", "Life in the City", "Salt and the Sea", "The Cell", Arts and Entertainment, folk rock, III, Jack Gienke, MBU, MBU Timeline, melancholy, music, Music Review, musical narrative, The Lumineers