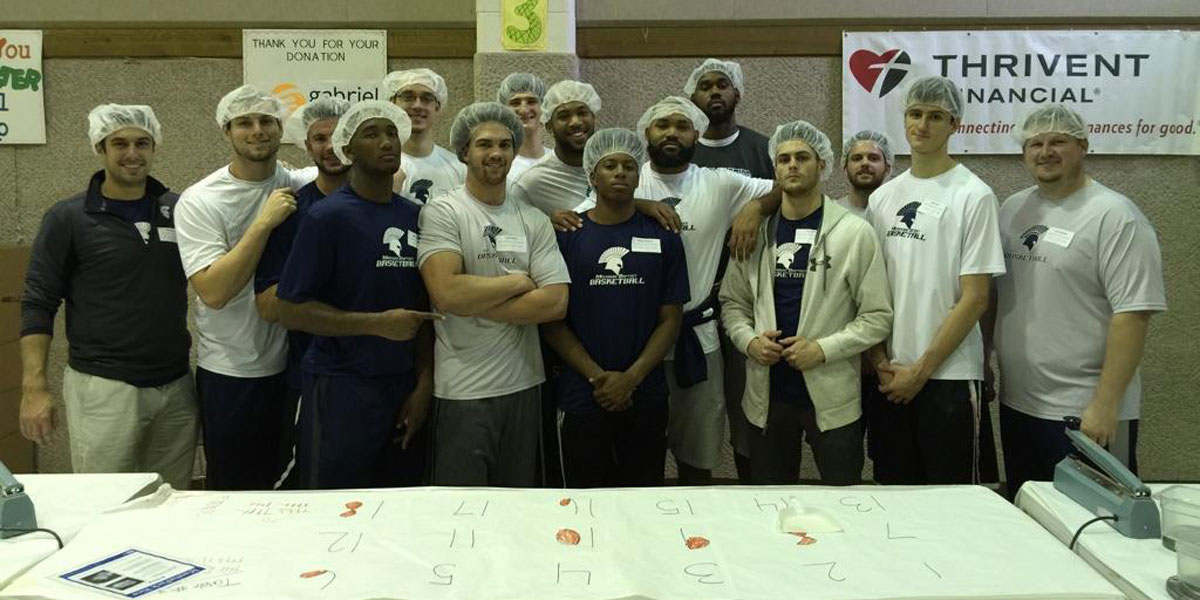 The Missouri Baptist University men’s basketball team spent their day Saturday, Oct. 31, not only at practice but also with Good Shepherd Lutheran Church in Ballwin, Mo.

Good Shepherd children and adults, in conjunction with Feed my Starving Children, hand-pack meals the church ships to nearly 70 countries around the world.

Good Shepherd, at 327 Woods Mill Road, is a church that feeds starving children and in nine years the church has packed 2.4 million meals.

During the packaging, the men’s basketball team had some friendly competition with a local cheerleading team to see who could pack the most boxes.

Charity experience has made a huge impact on the men’s basketball team, bringing them closer together and improving their team communication.

“Working with the organization Feed my Starving Children was a blessing to be able to see how something as small as taking a couple of hours out of your day makes a huge impact in getting meals to many people all over,” said Assistant Coach Jared Goodwin.

“We are definitely blessed to be able to have food at our disposal easily,” Goodwin said. “To see how a large number of people go long periods of time without anything opens your eyes to how blessed we are.”

One of the team’s graduate assistants agreed.

“I thought it was great. It was a chance for us, as a team, to help kids in need. It was an opportunity for us to bond off the basketball court. It was a pretty special experience getting to pack meals for people who otherwise wouldn’t have anything to eat,” said grad assistant Pat Sodemann.

“I thought Saturday was a good experience. It showed me that when we work together to help others we’re serving a purpose to give back to those in need,” said junior guard Will Harrington.

Senior guard Stephen Buckner added, “It was interesting and fun competing with others to see who could pack the fastest and most efficiently.”