Written by Josh Eaton on October 5, 2016. Posted in Arts & Entertainment

U.K.’s beloved band, The 1975, are topping U.S. charts once again with their new brighter, bolder, 2016 album, that bridges the gap between 1970s feel good vibes and 21st century hip hop. 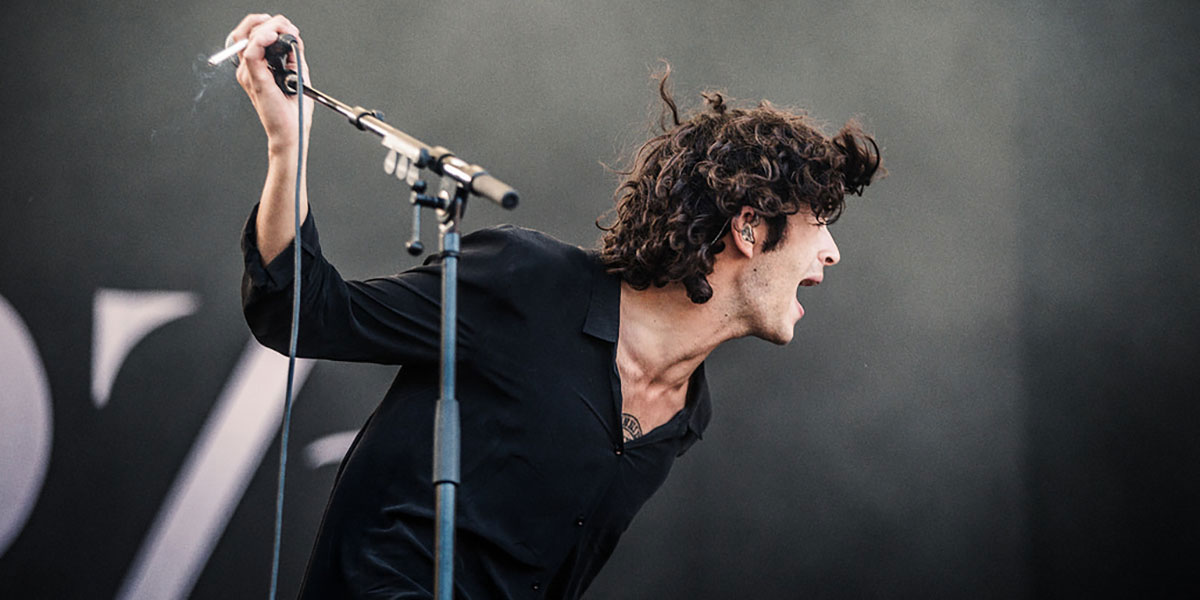 While the popularity of shag carpet, lava lamps and vehicles without the proper seat belt requirements might be long gone, the music from the 1970s still remains a staple in the industry.

The 1975 from Wilmslow, Cheshire, have perfectly replicated the feel good vibes from the Psychedelic Seventies with a 21st century twist in their new album, “I like it when you sleep, for you are so beautiful yet so unaware of it.”

Previous to the album’s release, fans feared the band’s future was in turmoil.

On June 1, 2015, the 1975 terminated their social media accounts, leaving their followers in the dark, but thankfully the supposed “break-up” was nothing more than a publicity stunt to gain traffic for their upcoming album.

The next day the accounts were back up and running with a brighter, bolder makeover.

The transition from black and white to bright neon colors seems to be the overarching theme for the new album.

Sex, drugs and money were the focal point of numerous songs on their first record, self-titled “The 1975,” while vulnerability on religion and relationships have emerged in the second, clouding out the gray tones from prior surface level songs and opening the listener’s eyes to the brighter more real world issues.

Out of the gate, the songs “Love Me” and “UGH!” hit home, mimicking fan favorites like “Chocolate” and “Girls” from the first album, but the deeper the listener goes, the further they travel into the mind of lead singer, Matthew Healy.

“I’ve got a God shaped hole, it’s infected,” Healy says in the opening line of the song, “If I Believe You,” recognizing the small nudge inside each of us hinting at a greater good and purpose for the lives we lead.

Healy goes on to say in the chorus,

“And if I believe you, would that make it stop?
If I told you I need you, is that what you want?
I’m broken and bleeding, and begging for help
And I’m asking you Jesus, show yourself…”

This song, as well as a few that follow in the second half of the album, speak truths far more profound than the radio static we fill our heads with now.

He continues his struggle with God by saying, “Showing me consciousness is primary
In the universe and I had a revelation, I’ll be your child if you insist. I mean, if it was you that made my body you probably shouldn’t have made me atheist…”

A choir fills up the empty space, building in intensity until reaching the line, “I’ll be your child if you insist,” then building back up through the line “you probably shouldn’t have made me atheist.”

We don’t know exactly where Healy stands in his battle to find truth and trust God, or doubt a reason for human existence all together, but this song is relatable to so many individuals fighting the same fight.

His vulnerability and honesty allow us to also open up and ask ourselves these tough questions as we journey together with him through this song.

This new album, unlike the one prior, is full of long melodic pauses.

Chords hang from line to line, leaving the listener patiently awaiting the next heavy-hitting idea Healy wants to get across.

“I like it when you sleep, for you are so beautiful yet so unaware of it” is the perfect sequel to the self-titled album that revolutionized The 1975 into the worldwide phenomenon they are today.

The album earned the band the No. 1 spot on billboard.com’s top 200 list shortly after its release, creating the common trend of listen, love, replay, repeat.

I’d highly recommend listening to the album in its entirety from front to back, not just skipping to the radio-ready tracks, but taking the time to appreciate the journey they attempt to take you on.

The album truly is an emotional, vulnerable ride, full of highs and lows, well worth the small price tag to purchase.