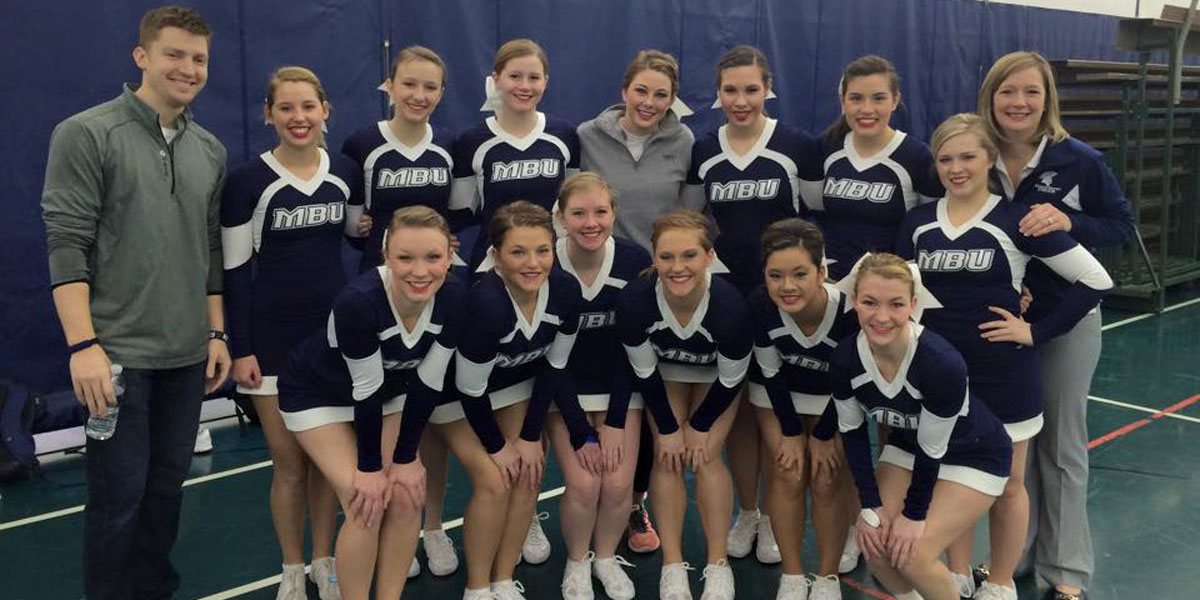 The Spartan Cheerleading program has been keeping busy since August and finally wrapped up its season Feb. 28.

The team started the season off with cheer camp, where it received a bronze bid (an invitation) for NCA Nationals in Daytona, Fla.

However, this year’s cheerleading squad focused more on the first season of football for MBU.

The cheer team members were excited to participate in new traditions specific to the Spartan football team.

“I got a chance to make history as a freshman by cheering for the first-ever MBU football game vs. SEMO,” said freshman, Sarah Koenen. “Even though it was a heavy loss, I’ll always remember that as the game I made history with my cheerleading squad.”

Spartan Cheerleading kept busy with the Rally Alley before every home game, walking around with Spartacus, the team’s mascot.

The Rally Alley is a new Spartan tradition for a tailgate experience before all the home football games.

“It was such a great experience to get to talk to all the Spartan fans,” said Jayme Fakes, an education major. “I enjoyed getting to take photos with the little girls, who want to be cheerleaders when they are older.”

Also during this year’s season the team cheered the football team on during the new tradition of the Spartan Walk and performing halftime shows during each home game.

The Spartan Walk is a new tradition of cheering for the football team as it walks from the SRC to the football field, helping the players get ready for the game.

After participating in the first-ever MBU Homecoming football game Nov. 1, the cheer squad then started preparing for basketball games and its own competition season.

The Spartans continued to improve their skill level and grow as a team when the spring semester started.

While competing at Lindenwood University-Belleville twice, once on Jan. 23 and again on Feb. 10, the cheer team accomplished its goal of hitting a solid clean routine.

Finishing up their last dual against Lindenwood-Belleville for a third time Feb. 20, this time in Michigan, made the team eligible to compete in the NAIA regionals.

In this competition Missouri Baptist competed against five other teams, co-ed and all-girl.

Missouri Baptist performed a near-perfect routine, receiving an 80.83 for the preliminary round. Performing a second time the team received an 80.05 in the final round.

The Spartans ended their season at the regional competition, placing fifth.