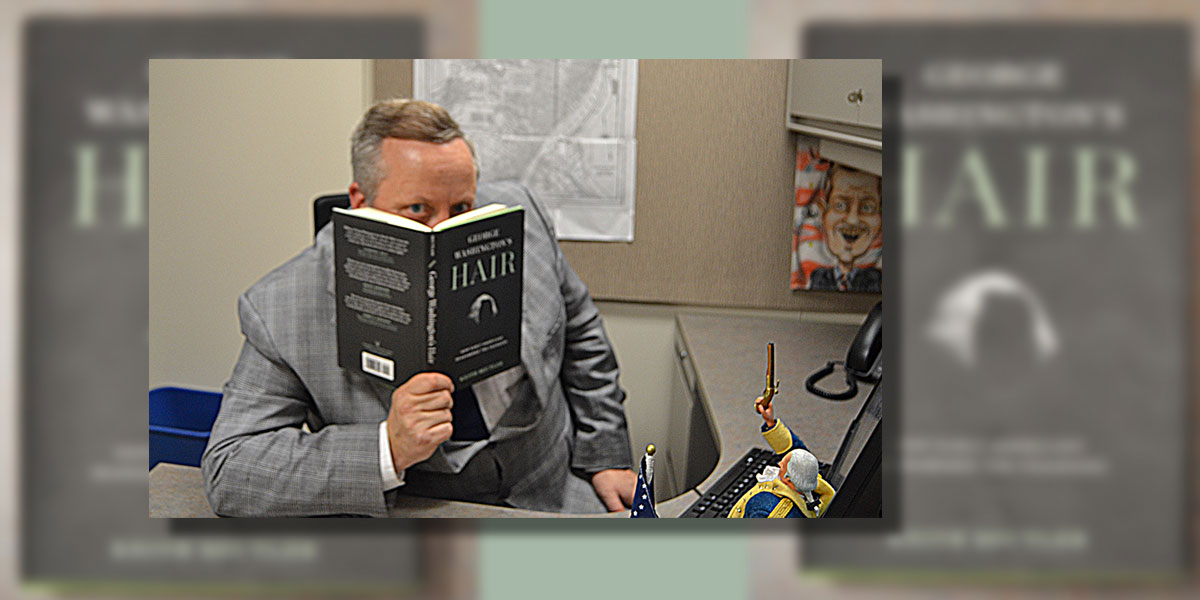 Pacing the floor of his history class with vigor, his arms doing just as much talking as his high-pitched, energetic voice, the acclaimed Missouri Baptist University professor lectures about a subject close to his heart — George Washington’s hair.

He is passionate on the subject and has his own opinions, as he does about most topics.

Why hair? Dr. Keith Beutler, MBU history professor part-time in 2000, transitioning to full-time in 2004, has spent 20 years researching how Americans preserved the memory of the Revolutionary War and the 50 years that followed, and yes, George Washington’s hair plays a key role.

Beutler is so intrigued by it, he wrote a book, titled, “George Washington’s Hair,” which was released on Nov. 10, 2021, published by the prestigious University of Virginia Press.

The part about George Washington’s hair comes from a phenomenon Beutler stumbled across during his research in which relatives and friends of Washington gave locks of his hair to people as a political nod, starting while he was alive and continuing after his death.

“My book is about the turn to patriotic relics, including to cherishing locks of George Washington’s hair, in the United States in the half century after the Constitutional Convention, and reveals how that growing popular preoccupation with physical mementos altered the politics of patriotic memory for early-American evangelicals, free blacks, women, rank and other groups, transforming how, by 1840, Americans thought about themselves and their country,” Beutler said.

Beutler’s reason for writing the book was because it was a topic nobody had really touched before.

“I wrote the book so that I could read it, basically. I had seen some good work, work that was good in itself on how Americans remembered the revolution and the founding in the 50 years that followed, and the gap that inevitably opens up in any society — and for them, too — between what the best evidence tells us historically happened, and what culturally people choose to think happened,” said Beutler.

Dr. Janet Puls, professor of psychology and human services as well as the chair of the Division of Social and Behavioral Sciences, Beutler’s division, remembered thinking how unique the topic and approach was.

“He uses the craze in early America for trading purported locks of George Washington’s and other founders’ hair as patriotic mementos,” Puls said in an email, “as a point of entry into explorations of the history and politics of patriotic reminiscence by Black Revolutionary War veterans, evangelicals, educators, women’s rights advocates, and others in the U.S. during the first half-century of the nation’s history.”

Dr. Beutler had found a way to explain early American memory, and also the way in which people used artifacts to create their own points. Beutler found this a frequent phenomenon within historical research that scientists and other thinkers of the era would use Washington’s hair and other artifacts as proof of their racial prejudices. 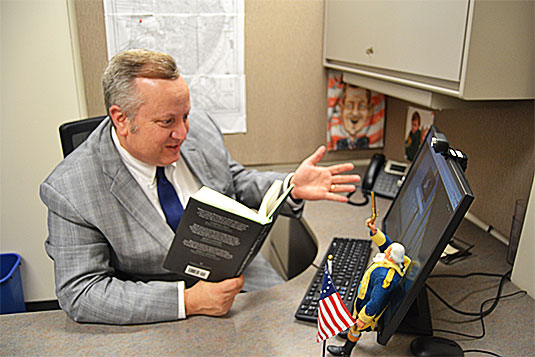 Beutler reads his book to a miniature George Washington figurine in his office at Missouri Baptist University.

“You start to say if I’m right about this, my hunches, somebody is going to eventually do that, in this time period, and I would think crazy stuff, like, at some point, I thought somebody is going to use George Washington’s hair to prove their racial theories, which is, of course, a terrible misuse,” said Beutler, “but I could just see it coming in that culture, and that it would be a scientistic, you know, an air quotes perversion, and sure enough, you know, I find this guy who did that, you know, very flamboyantly, thought very thoughtfully, and his samples still exist in Philadelphia.”

Growing up on a dairy farm, Beutler has many positive memories and was always interested in history, even thinking he would be president as a kid.

“In a sense, I think I always was [interested in history], but when I was about 4 or 5, I always specifically remember my mom got me an American history coloring book, and I didn’t color much of it, I hated that, but I was absolutely fascinated by the drawings and trying to understand who everyone was and what they did.”

So Beutler grew up and followed his dream of being a historian, starting his book around the time of the 9/11 tragedy, its slogan, “Never Forget!” revving Beutler’s motivation to write about American memory.

“No matter what the topic was, in those first couple of years (following Sept. 11, 2001), that related in their (American citizens’) minds to everything, and very understandably, but I thought this is really fascinating that we’re terrified we’re gonna forget this thing that we’re basically haunted by,” Beutler explained, “and I think the larger question for me became, are we going to remember it accurately? And are we going to accurately remember what we did in response? Are we going to romanticize it, or round the edges off it in some ways. And I think we have, by the way, and so that was one of the things that I thought this is just a very curious human impulse to want to understand better.”

Once his manuscript was complete, in January 2020, the University of Virginia Press handed it to two experts for feedback, while he and UVA Press Acquisitions Editor Nadine Zimmerli, responsible specifically for historic and political books at UVA, worked in close collaboration on every line of the book. 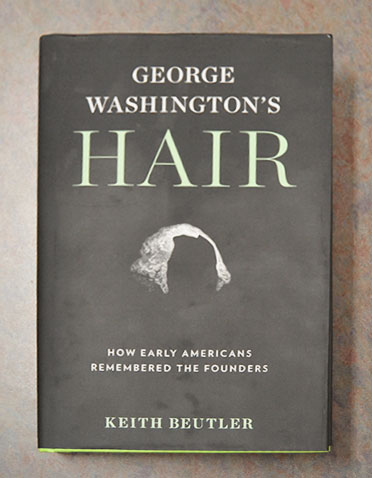 Beutler’s book, “George Washington’s Hair,” was published by the University of Virginia Press in late 2021.

“Working on Dr. Beutler’s book was a joy because he is a wonderful and collaborative author, and because he is a great writer with something important to say,” Zimmerli said in an email. “The best academic history books package in lively prose profound insights that make the past appear in a new light. ‘George Washington’s Hair’ is such a book.”

Zimmerli said she loved the way in which examples throughout history were given, and how people in the revolutionary era and the years that followed used the hair as political proof of worth.

“Dr. Beutler’s [book] takes what appears as an ‘out there,’ seemingly niche practice — early Americans collecting the first president’s hair and other relics from the founding era — and demonstrates its absolute centrality to the ways in which these Americans imagined the body politic and the nation’s identity in the 19th century,” said Zimmerli. “I especially liked the chapters that show the ways in which marginalized groups, such as women and Black Americans who ordinarily were excluded from politics in the 1800s, used these relics to demand inclusion and made their voices heard.”

Yet a big problem Beutler has with this practice is how American evangelicals tend to romanticize the founders who, in a previous essay published in the spring 2005 copy of MBU’s publication “Intégrité: A Faith and Learning Journal,” Beutler explained the various religious views of the founders and that their intent was never to start a completely Christian nation.

But he also expressed concern with his own evangelical circles regarding memory of the Revolution.

“It’s heretical and simply false to imagine that Heaven came to Earth as the United States or that it ever will,” Beutler explained. “And there are so many problems that we suffer from as a subculture. … It makes us simpletons about many things, and distracts us really from the real solution — Christ.”

“I was excited that it was going to be published. Americans need to remember George Washington and the most influential founders rightly, rather than in the images created by those who idealize them as near-perfect Christian icons of American exceptionalism,” said Heckel. “Turning locks of Washington’s hair into relics of almost religious devotion reveals an unhealthy obsession with remembering the man who did achieve military and political greatness but was not interested in founding America as a Christian nation in any sense of the term. This may surprise, but Dr. Beutler demonstrates the facts in historical clarity.”

After his 20-year effort, Beutler’s first book is finally finished, but his love for history is far from over.

“For me, I mean, it was almost inevitable that I was going to do this kind of thing because, I would do it for free but for the fact that I do need to feed my kids,” said Beutler. “It’s a labor of love for me, always has been.”

As for his next possible book, Beutler said later: “Probably something on Abraham Lincoln’s toenails.”