Written by Ryan Rerich on November 22, 2013. Posted in Sports

Jan-Henry Jordaan, a sophomore accounting major from South Africa, has traveled across the Atlantic to find himself under the arch attending Missouri Baptist University. His path is interesting as well as challenging, as he lets God lead in determining the future. 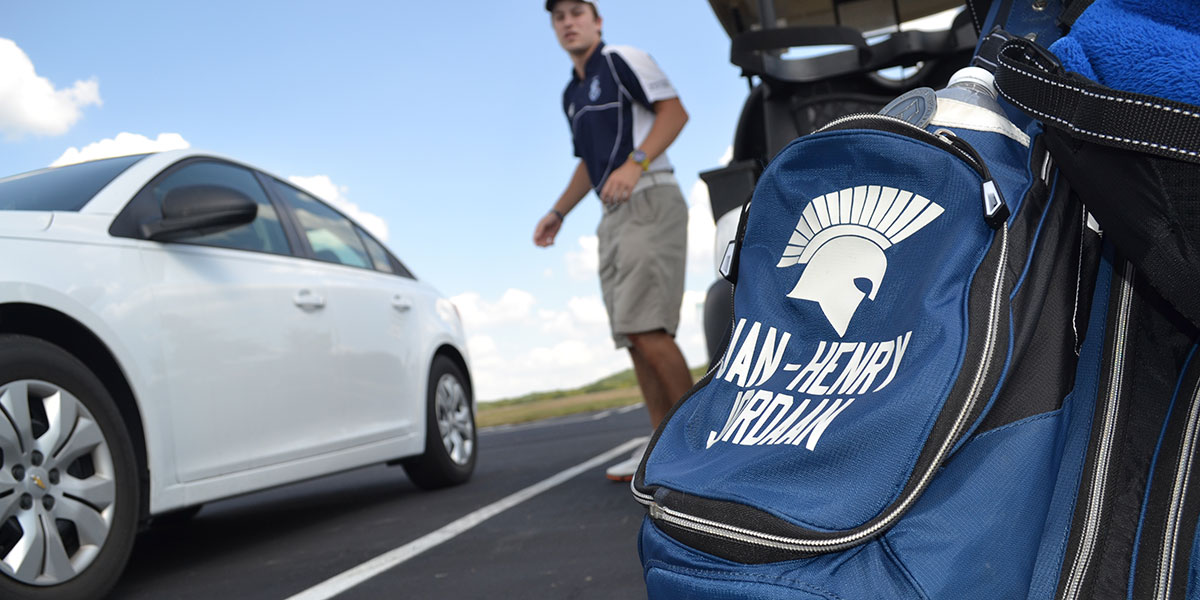 The power of an email has the influence to send an athlete 8,500 miles and change his world.

That’s what happened to Jan-Henry Jordaan. In 2011, he sent an email to the Missouri Baptist University golf coach, and the response changed his life.

While attending college is life-changing, for Jordaan, it was even more so — Jordaan was born Aug. 7, 1993, in Stellenbosch, South Africa.

“I began my life in De Doorns, South Africa, and have lived there all 19 years of my life. It has been an adventure that has led me to where I am today,” Jordaan said.

During Jordaan’s senior year of high school in 2011, he began to email coaches off of a list that his father gave to him.

“My dad gave me a list of the Christian universities here in America and told me to email the golf coaches at each of them,” Jordaan said.

Jordaan ended up sending an email to MBU golf coach Justin Hoagland, and he responded shortly after that. What he said Jordaan will remember for a lifetime.

“Coach told me in an email that he was interested in me and my abilities as a golfer. I was pretty excited because this email actually received a legitimate response,” Jordaan said. “I was instantly hooked on what my future could hold at Missouri Baptist University.”

Jordaan could not hold this excitement in and he had to call his parents to the room to tell them the news.

“I told them that the coach from MBU replied to my email and that this is a really good opportunity to go to America,” Jordaan recalled. “I also told them that I really would look into this chance and the possibility that I would go would depend on what I could find out about the school and the golf team.”

He looked into the school and into the city of St. Louis, and knew that if he was offered a golf scholarship, he would leave his life in South Africa and travel to America to further his education in the states.

Jordaan spent hours upon hours researching the St. Louis area that he would be occupying a few months down the road.

“I looked at the temperature, surroundings of the campus, rainfall levels, golf courses, size of the city, and many other aspects that could affect my life.”

Approximately two weeks after the initial message, Jordaan received another email from Coach Hoagland offering him a golf scholarship if he truly wanted to attend Missouri Baptist University.

Jordaan was fired up at the sight of this and he took the offer less than a week later.

“I kind of knew what to expect, but at the same time I was nervous. It would be my first time in America, and I would be living in a different place that I have never seen in person before.”

The six-month wait before Jordaan would leave for America was spent preparing for what the future may hold.

“I spent time with my family and I worked on the family-owned grape farm . I got my thoughts together and I was ready to travel over when the time had come,” he said.

Coach Hoagland was also excited in the golfer that he had come across from South Africa.

“I knew the potential of the golfer that I had recruited. Jordaan was a young man that could contribute to the team in a positive way right from the start,” Hoagland said.

August 2012 arrived and it was time for Jordaan to leave his home to embark on a new life filled with many unknowns.

“On the 13th of August I headed to Cape Town International Airport and awaited my 24-hour flight without stops, ultimately destined for Lambert Airport here in St. Louis,” Jordaan said. “It was an extremely long flight and once I got here a few things struck me right from the start.”

First, of course, was the weather.

“It was late evening on the 14th and as soon as I stepped foot outside I felt the Missouri heat and humidity. I was not accustomed to that type of weather. I knew some adjustments would have to take place right away,” Jordaan said.

The next day he headed to the university to check out what was in store for him.

“Missouri Baptist looked really nice and it was clean. The people were very friendly and I liked my first impression of the place I planned to be at for the next four years,” Jordaan said.

The university was quite different from the universities back in South Africa.

“MBU was smaller than the universities back home, but I had a personal feeling that I got when I first got here.”

Some other things were obviously different that Jordaan noticed right away.

“Another first thing that hit me instantly was the driving on the other side of the road. I also was not used to having air conditioning in all of the buildings,” Jordaan said. “The different phrases Americans used were funny, and everyone began by commenting on my accent.”

Once he settled in he met his roommate, Ryan Rerich, who traveled to MBU from a not-quite-as-far-away land, Texas, and the two began a brother-like relationship from the start.

“I thought he was quiet at the beginning with his sunglasses on, but once I quickly got to know him, I discovered some of his true personality traits,” Jordaan said.

The two began their collegiate golfing career the next week after arriving, and that started with getting used to MBU’s home course, the Aberdeen Golf Club in Eureka.

“The rough was unplayable and I was used to being able to play out of the rough,” Jordaan said. “It took me a bit to get used to, but I had to get used to these playing conditions quickly. My first tournament was less than a month after I arrived, and I was ready for what the season had in store for me.”

The first semester went by quickly and Jordaan noticed that he had to grow up as a person.

“I had to pay my first bills, learn how to use different measures like ounces and yards, do assignments online and basically just make it out on my own,” Jordaan said. “I felt like I did a pretty good job and my life changes each and every day that goes by.”

The first semester ended, then the first full year, and Jordaan has gone on with his life the best way he has known how.

Other people who know him have positive thoughts about the young man. Former MBU golfer, Jack Jackson — from England — said Jordaan is well-rounded as both a golfer and a person.

“He is a good golfer and a respectable young lad that I have been able to be around my last year here at MBU,” said Jackson. “I think I can speak for others when I say that he is good guy to be around.”

Other teammates agree with Jackson.

“He is a nice, well-rounded, young Christian guy to be around. I spend almost all of my time in the dorms around him and he is a great friend to have,” said Andrew Vance, a sophomore from O’Fallon, Ill.

Jordaan has strengthened his relationship with God since he has been at Missouri Baptist University.

“I have grown in my faith and it has helped being around Christian friends that are pushing me in my faith. Our lives are to be lived out for God and He needs to be at the center of everything that we do,” Jordaan said. “All of the honor and the glory is His and always will be.”

Jordaan is an individual who seems to be in the right mindset and ready to advance in his years ahead at MBU.

While there are still many things that are unknown in his life, what he does know is living in the present, and the rest will take care of itself with God’s hand guiding him in his life.