Written by Shelby Wannemuehler on April 20, 2018. Posted in Arts & Entertainment

Handel’s “Messiah” is being brought to life tonight in the Chapel by MBU’s Chorale and Choral Society. Dr. Alton Lacy, MBU’s retiring president, will be singing in the combined choir. 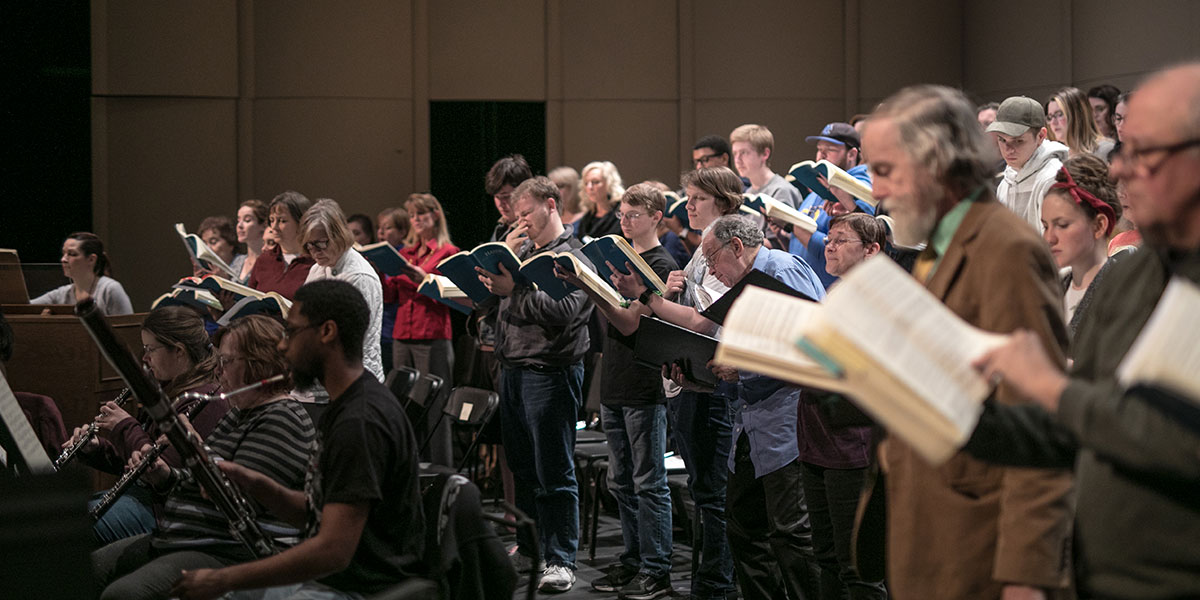 Pictured above is the combined choir rehearsing for the “Messiah” performance with the live orchestra that will be accompanying them tonight in the Chapel.

What some may know as one of the most beautiful pieces of musical literature is a work of music that has been in the hands of musicians and lovers of music for centuries.

MBU Chorale’s director Jordan Cox, MBU’s assistant director of music and director of choral activities, is looking forward to such an opportunity.

“I am very proud to say that we have been rehearsing the work with no cuts. Often times choirs will perform an abbreviated version since it is so challenging to perform the full work. We will have all the solos performed as well,” said Cox. “We also will be performing with a professional group of musicians in the orchestra with about 100 singers. So it is a tremendous opportunity for our students and a wonderful experience for our audience.”

According to, “The Glorious History of Handel’s Messiah” by Jonathan Kandell, “Handel composed ‘Messiah’ in an astounding interlude, somewhere between three and four weeks in August and September 1741.

“He would literally write from morning to night,” said Sarah Bardwell of the Handel House Museum in London, quoted in Kandell’s story on Smithsonianmag.com.

Handel’s genius was recognized by one of the largest musical greats of all time, Wolfgang Amadeus Mozart.

“Mozart paid Handel the supreme compliment of reorchestrating ‘Messiah’ in 1789. Even Mozart, however, confessed himself to be humble in the face of Handel’s genius. He insisted that any alterations to Handel’s score should not be interpreted as an effort to improve the music,” Kandell said in his December 2009 article on the Smithsonian magazine’s website.

In fact, Mozart was quoted as saying: “Handel knows better than any of us what will make an effect. When he chooses, he strikes like a thunderbolt.”

Junior public relations major Haley Sandvoss, singing tonight in MBU’s performance of “Messiah,” said, “I feel like a lot of people have not actually heard ‘Messiah,’ I being one of those. This is new to me. I have never sung a masterwork, so to be performing this for our school is an amazing opportunity.”

What an undertaking it is for Chorale’s director Cox to choose such a revered piece of musical literature.

“At MBU we have had a tradition for many years to perform Handel’s ‘Messiah’ every four years. This is one of the greatest and most popular master works in the choral canon and we believe every MBU choral student should sing it at least once before graduating,” Cox said in an email.

MBU splits the piece into two seperate sections and performances.

“Because it is such a long work, we break it up performing Part I (about the prophecy and birth of Christ) at Christmas and Parts II & III (about the passion, resurrection and ascension) at our spring concert which is often near Easter. It is challenging, but attainable, and very fun to sing,” said Cox.

With that undertaking, challenges are bound to arise for the Chorale members.

“Melismas are one of the hardest things. I did not actually know they were a real thing until I started singing this work of music,” Sandvoss said, explaining that a melisma is the singing of a single syllable of text while moving between several notes in succession.

Junior public relations major Krista Krekeler, who will be singing in the performance, said, “I am not a music major, so a lot of parts have been challenging for me to learn. I sometimes have trouble with certain rhythms, but I can usually work it out after hearing it a few times.”

“Parts II & III focus on the passion, resurrection and ascension of Christ.  Every believer will recognize the Scripture that is woven into the text and is an excellent work to be rehearsing during the Lenten season,” said Cox.

The music portrays some of the deepest emotions of Christ’s journey on Earth.

“The music has a hard way of expressing itself. Once you have heard it a few times, once you have read it and sung it, you can really tell when the stories are really grim and mean and angry and when sometimes they are so joyful and happy expressing the words of God,” said Sandvoss.

McDonnell, who will be singing in the performance, added: “I think a lot of the ‘Messiah’ is about the contrast of reverence and joy. Some of the movements are slow and dramatic as to signify a somber tone, while others are light and bouncy to reflect the joy in salvation.”

“The Glorious History of Handel’s Messiah,” by Jonathan Kandell on Smithsonianmag.com, includes interviews with many prominent directors and conductors throughout Europe.

“The feelings of joy you get from the Hallelujah choruses are second to none,” Laurence Cummings, director of the London Handel Orchestra, said on Smithsonianmag.com. “And how can anybody resist the Amen chorus at the end? It will always lift your spirits if you are feeling down.”

Handel’s work abstractly portrays the life of a believer.

“A sense of humanity imbues his music as well — a point often made by conductors who compare Handel with Bach. But where Bach’s oratorios exalted God, Handel was more concerned with the feelings of mortals. ‘Even when the subject of his work is religious, Handel is writing about the human response to the divine,’ says Harry Bicket, a conductor, harpsichordist and London-based director of the English Concert chamber orchestra.”

Certain choruses in Handel’s work manifest the life of a believer musically.

“I think a lot of the emotion comes from the actual text of each piece. A lot of times, Mr. Cox encourages us to really meditate on the words that Handel is trying to emphasize,” said Krekeler. “One of the pieces I enjoy most is, ‘All We Like Sheep,’ which is about all of us as sinners turning away from God and going our own ways. Each voice part comes in at different times in what seems like an organized chaos, which really helps you to visualize sheep going astray.”

Freshman musical theatre and music education major, Cameron Tyler, a performer in this semester’s production of Handel’s “Messiah,” describes why he loves this piece of music.

“I love it. I get to learn about how people used to worship God and how these songs by themselves are random but together show a beautiful story,” said Tyler.

Additionally, a live orchestra will be accompanying MBU’s Chorale for Handel’s “Messiah.”

“I love performing with a live orchestra. It makes the music seem even more dramatic and meaningful,” Tyler said.

Students performing in “Messiah” are looking forward to the opportunity to sing with a live orchestra.

“I’m most excited to get to sing with an orchestra. I love hearing all the voices and instruments come together,” said McDonnell.

Excitement is rising among the student performers.

“I think it is really important for everybody to come and listen to what we have been working on for so long. There are many student soloists and a couple of student conductors featured as well, which is really exciting to get to see,” said Krekeler.

Amidst all the work Chorale has put into the piece, performers want anyone and everyone to come and experience the piece for themselves.

“Everyone needs to hear this because it is a story that needs to be heard and it is a timeless story that will forever be in our hearts,” Tyler said.

Krekeler added: “I am really excited to finally see everything come together. I have never sung an entire masterwork before, so I am happy to be a part of this.”

“’Messiah’ is a work that’s familiar to our culture. Even ‘non-music’ people will recognize at least the ‘Hallelujah Chorus’ at the end of Part II. This is certainly a work that all academics should be familiar with and to have an opportunity in our own space to hear it with a professional orchestra and for free is a tremendous educational experience,” said Cox.