Written by MBU Timeline on February 19, 2017. Posted in Arts & Entertainment

Local musicians Eric Phillips and John Walth pursue their life-long passion for music with their bands A Day at War and Sails Through Storms. 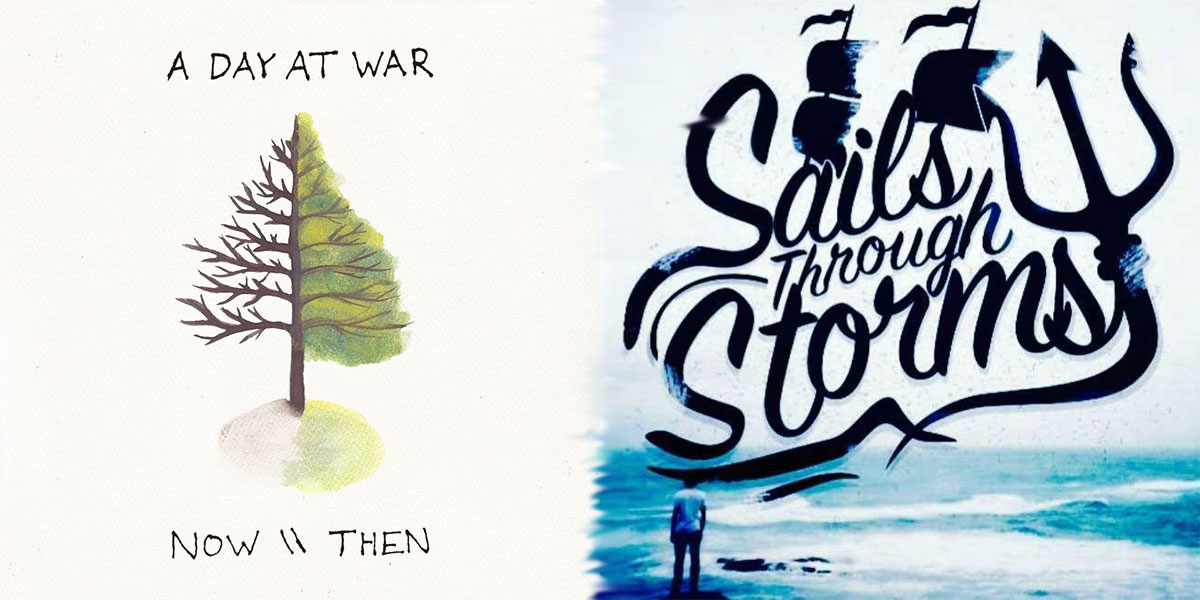 The dream of being a musician is one shared by many across the globe. Ask any child what they would like to be when they grow up and one will often hear the enthusiastic reply of “a rockstar!”

Those who decide to follow this route into their adult years face countless challenges and obstacles along the way, but with the proper ingredients of passion, skill and creativity one can create their own unique recipe for success.

This cocktail of characteristics is instrumental in driving Eric Phillips, guitarist for A Day at War, and John Walth, guitarist for Sails Through Storms, toward their respective goals — a pursuit for both of them which began long ago.

“I’ve been playing music since I was a kid. I’ve always been around great music, and that caused me to want to play it from a young age. I’ve been writing songs as long as I can remember,” said Phillips. “My parents gave me a tape recorder when I was 3 or 4, and I filled up a ton of tapes with little songs I would make throughout my childhood. As I’ve grown up, the songs I’ve written have grown up as well, in addition to my ability to record and release them properly.”

The tape recorder given to young Phillips helped orchestrate events which began him on this path from an early age, but Walth’s journey began with a different kind of childhood experience of his own.

“I started to play guitar because of ‘Guitar Hero’ video game actually. After playing ‘Guitar Hero’ so much I figured I [could] pick up guitar too. After I played and learned a bit I began talking to people. I started small, playing in a church group, high school events and later a band,” said Walth. “Talking to people is how to get out of being a bedroom musician.”

Transitioning from bedroom to stage presents its own set of challenges, but with sound communication between fellow musicians and a healthy dose of patience great things can be accomplished.

This was the case for Phillips and his longtime friend Nathan as well as former coworkers Anthony and Taylor who together encompass A Day at War.

“The band was a long time coming. My friend Nathan and I have written together for years, as well as doing small music projects together. And Anthony and Taylor are two talented guys I had been wanting an excuse to work with,” said Phillips. “A Day at War came about because the four of us wanted to challenge ourselves creatively, as well as provide an outlet for our lyrics, melodies and the other ideas we’ve had floating around in our heads.”

Along with the advantages of working within a group of musicians also comes inherent complications in terms of scheduling and direction.

“[The] first [hurdle] is finding time between three to five people’s schedules to actually practice. Many bands fall from this,” warned Walth. “Second is getting the same people to agree on something. Musical direction, when to play shows, even what songs. It’s a group thing. Finally is moving from playing in a basement to a stage. Being on a stage is a bit intimidating at first. Expecting the unexpected is a big change. Packing for string breaks, extra picks, and even a set list.”

All the preparation in the world does not mean a thing if there is nowhere to perform. The band and the venue must work in harmony in order to bring new music to local audiences. This presents both parties with an interesting conundrum.

“You can’t play shows without having a draw, you can’t get a draw without playing some shows. Every move you make is gradual and it requires a lot of patience and careful planning,” said Phillips.

This might seem like local bands are forced to rely too precariously on venue owners, but the bands still carry much of the responsibility themselves.

Sails Through Seas members have taken this burden on their shoulders readily, having performed at a variety of local venues including Cicero’s, a local bar which prides itself on an expensive drink selection and live music, Fubar, a self-proclaimed niche venue with two stages, and Pop’s, a popular venue with a rich history.

“Each venue has their differences but the people who run them appreciate and understand how music is,” said Walth. “Just ask what shows need acts. As much as someone wants to play for a big national act, at a venue you’ve got to start small. Play a few times at different places and spread your name out to fans and bands alike.”

Furthermore, numerous opportunities exist to local bands beyond the traditional venue scene if they know where to look.

“The first gig we played was actually at MBU. We played the Perk event this year in front of few hundred students,” recalled Phillips. “It was our first chance to see how this project we’d been working on in my basement was going to be received by others. It’s always a moment of vulnerability to perform something you’ve made that you’re passionate about in front of people. You have no idea if they’ll connect to it or not. But people seemed to really have a good time, and so did we.”

Support from the people coming out to hear local music is ultimately what will make or break a band. According to Walth and Phillips, everyone has a role to play in this.

“St. Louis’ music scene is great. But not enough people recognize that, which makes it a sort of hidden gem. St. Louis has a rich musical history, and that legacy is still very much alive and well today. The bands we’ve met so far have been very nice and encouraging to us,” said Phillips, before concluding with this call to action: “Go find some local music you like and see their show.”