Though it is still a relatively new entity on Missouri Baptist University’s campus, the Academic Success Center continues to grow as a major aid of students in need of academic assistance. 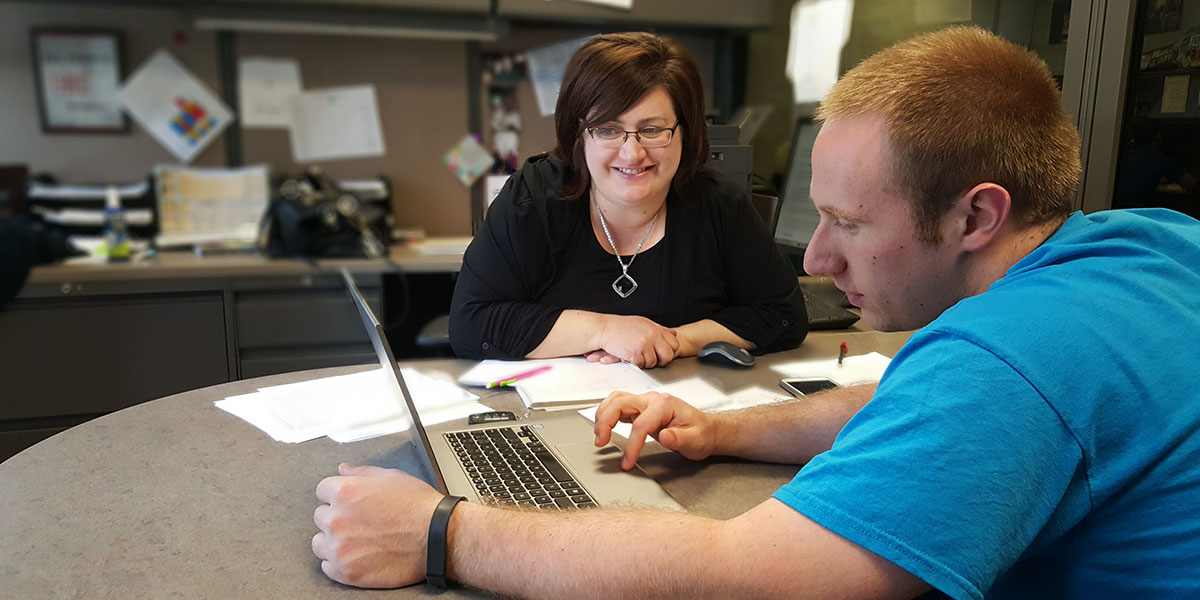 Amy Goodberlet tutors student, Erik Gustafson, in different subjects. Goodberlet was recently named Staff Member of the Year at MBU for her commitment to her job, which she says is her calling.

In 2007, while Missouri Baptist University was going through a formal re-accreditation process, it was noted by one of the evaluators that there were no formal academic support services for students.

The Academic Success Center was started to be a formal tutoring program and writing assistance resource on campus that would focus on helping underachieving students who were found to be on academic probation.

Until 2014 the Academic Success Center offered a few mathematical tutoring options, some scheduled appointments for writing assistance, but not many other courses in which a student could receive help.

In its infancy the center primarily focused on tutoring, writing help, special needs accommodations and testing, but in the past two years there has been a shift in focus of the Academic Success Center, moving toward the overall environment that surrounds the student. This change in strategy came when Amy Goodberlet took the position of director of the Academic Success Center in 2014.

Goodberlet had worked in the ASC in a part-time capacity for three years and had seen the need for change.

“One thing that needed to be changed was that we could not wait for students to come to us, we needed to come to the student in offering of our services,” said Goodberlet, who was just recognized as MBU’s Staff Member of the Year. “We could not afford to be reactionary to student issues but proactive in marketing what resources the ASC has available to students.”

She knew there were students who needed academic assistance, but they weren’t visiting the ASC.

The first three tasks Goodberlet performed were: gathering data that told the ASC story, empowering and encouraging staff to treat every student as you would a guest in your home, and marketing the Academic Success Center to every person she could, promoting the ASC to anyone who would listen.

“When I accepted the director position, I started talking to other directors on campus, division chairs and VPs about what we were doing in the ASC, how we could help students, and reiterating our story through the collection and analysis of data,” Goodberlet said. “I encouraged tutors, writing coaches and staff to promote the ASC in their classes, sports team and around campus.”

Goodberlet’s student success model is based on caring for and educating the whole student.

Goodberlet said she believes the student’s spiritual, physical, emotional health, as well as the academic background, are equally important for student success.

“If the student has the intellectual ability to earn high grades but there are family, financial or emotional issues, then it is likely that the student will not perform as high academically,” said Goodberlet.

While anecdotal details are important, sometimes the only way to describe real change is through looking at numbers.

In fact, since the 2014-15 school year, about 68 percent of all students who visit the ASC are athletes.

Knowing that some athletes would require additional support while their sport was in-season, Goodberlet partnered with Dr. Tom Smith, athletic director for MBU, to develop a system of academic support for athletic study halls.

Quest, the mentoring program for academic probation students, was started prior to Goodberlet being hired and is still in full-force.

The program has been changed to better evaluate the “whole” student and not just the academic side.

“We try to guide students through a self-evaluation process which includes academics, career and life goals,” said Goodberlet.

In addition to Goodberlet, the ASC has two part-time mentors, Jeannette Musgrave and Judy Ellison, who work daily with Quest students, transfer students who have been placed on a Student Success Plan, a program developed in 2015, and any student needing support.

The overall environment in which the ASC exists has been cultivated by the entire staff who work to help students succeed in general.

“Students have someone who will listen and care beyond their academics,” said Musgrave.

Although the ASC was developed as an academic resource for main campus students, it has grown into a place for overall success.

“We are looking at the whole person, not only the math class or the science class,” said Ellison.

Ellison has degrees in both psychology and social work, and has many years of experience in working with families, the homeless population of St. Louis, and the housing authority in the city. Ellison is driven to provide all the help students need to succeed overall.

Musgrave has degrees in both psychology and counseling with a background in high school and college counseling, which makes her proficient in assisting first-year students to succeed.

Students seek them out daily for help. Ellison and Musgrave believe the main reason for the unprecedented growth of the ASC is the relationship-focused environment.

In fact, staff members agree that building relationships with students is key to their accomplishments.

Goodberlet tells students all the time that they can do all things through Christ who gives them strength, and she believes it.

“My motivation for coming to work every day and always looking for improvements is because I believe I am called to help students fulfill God’s plan for their lives,” said Goodberlet.