Missouri Baptist University student, Shelby Wannemuehler, tells of how the trial and loss of a parent strengthened her faith in God and changed her life forever. 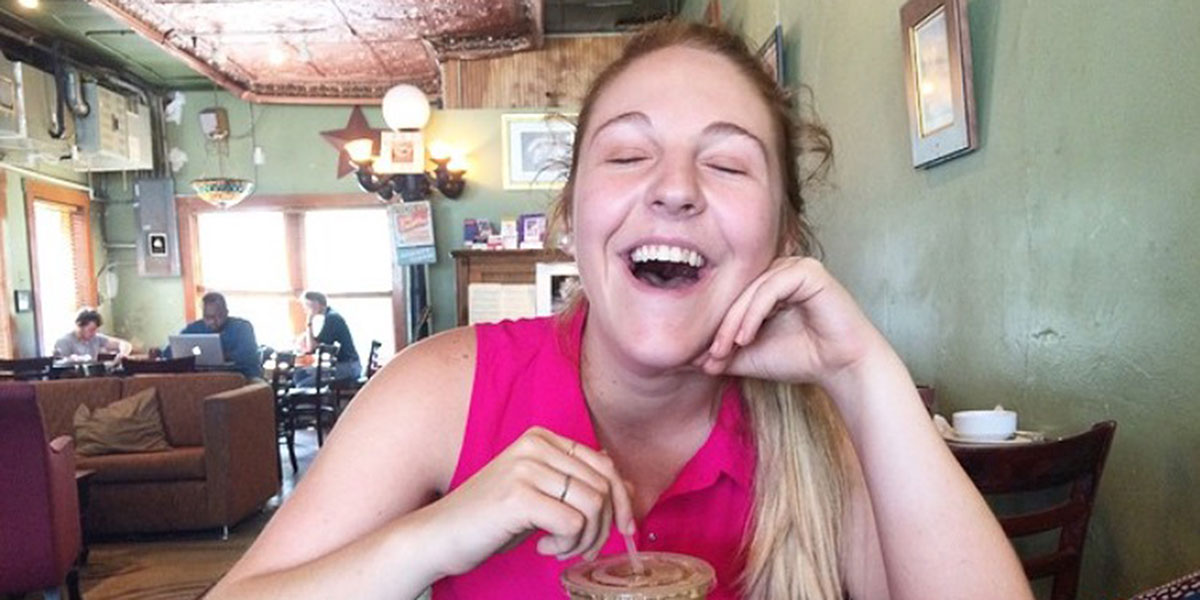 A fair-skinned blonde woman sits in a bustling campus coffee shop sipping an iced latte and casting a friendly smile to friends and strangers alike as they pass by.

As her smile radiates joy and love to each gaze her bright green eyes meet, no one would guess the trials behind this smile or the journey she has taken to be in this place of joy.

Shelby Wannemuehler, a junior public relations major, is known around campus for her abundant positivity, friendly conversation and contagious laughter.

However, more recently she is known by her strength and unwavering faith in a good and loving God.

“The Lord started moving in my life when I was entering senior year of high school and my mom got sick. He started softening my heart,” said Wannemuehler, referring to her mother’s stage one cancer diagnosis. “It was very treatable but it was just scary to hear. There’s a lot of weight that comes with the word cancer. People don’t like to talk about it.”

Through this experience God was working to soften Wannemeuhler’s heart and teach her “that there are so many bigger things in life than you, and this life isn’t even about you.”

Only the beginning of a two-year transformational journey, Wannemuehler’s mother was later found to be cancer free.

Then in February of 2014, Wannemeuhler’s senior year in high school, her father’s health took a turn for the worse when he suffered a heart attack and almost passed away during the surgery.

“My mom texted me and told me he was out of open heart surgery and he was OK but then 10 minutes later she texted me and said things were not looking good, but then her phone died,” Wannemuehler recalled. “I had about two and a half hours of no contact. I had no idea what was going on and I was just pacing around my house wondering, wondering what was going on.”

This moment of wonder and uncertainty, while her father was hospitalized at Mercy Hospital in St. Louis, proved to be a moment that would change Wannemeuhler’s outlook on life from then on.

“I had no idea if he was even here with us anymore. I have never felt so helpless and so not in control than in that moment,” she said.

“I had always read of people who cried out to God and I always thought that’s crazy, they must be in a dark place. It was that moment I remember laying on the floor in my room and I was just sobbing and crying out. I was just like OK this is not about me anymore.”

In that desperate moment, laying her burdens at the feet of Jesus became her only option.

“I realized the selfishness I had been living and all of the things I had taken for granted, my dad being one of them. In that moment I just wondered what am I going to do. Worst case scenario, if he’s gone, what am I going to do? And I just remember saying, ‘God take this from me, I cannot do this on my own,’” said Wannemuehler.

Wannemuehler reminisced about this crucial moment in her life.

“There was this weird peace I could not explain. It was just this beautiful calmness. There is just a freedom and a weight that is lifted off of your shoulders when you realized you cannot do anything. You just give it to the Lord and then you just sit and wait for him to work and he’ll work. Whether or not it is how we want it, he will work.”

Wannemuehler’s father survived the heart attack and the surgery to follow and started embarking on a healthier lifestyle following his time in the hospital.

Wannemuehler described the time following her father’s heart attack as the turning point in her faith and walk with Christ.

“I was like OK this is real. I am done living for me, it is all for him at this point. I really started seeking out the Lord and pursuing Him and just growing my relationship with Him,” said Wannemuehler. “He was slowly teaching me to just let go of myself and stop trying to control things.”

Little did Wannemeuhler know that, less than a year later, her faith would be put to the test again and this time in a way that would be harder than she ever could have imagined. Her father was diagnosed with agleo blastoma, a brain tumor, in the spring of her freshman year at MBU.

“It was so scary to know that he was most likely going to pass away from this. Coming to terms with that is crazy now, looking  back, because I know that my father had that heart attack, and the Lord brought him through that, not only to give us extra time with him but I appreciated time with my dad so much more after that and just thinking that if he had been diagnosed with the brain tumor and not had the heart attack, my view would have been completely different. The Lord had been working in my heart,” Wannemuehler explained.

Her father’s battle with cancer went on for nine months with news fluctuating between good and bad constantly, but the Lord continued to work and grow Wannemuehler’s trust.

“It was a roller coaster diagnosis. Then he started doing really, really bad and we knew his time was short,” she said. “It’s just weird coming to grips with knowing someone that you relied on so much for comfort and protection was going to be gone and it makes you rely on the Lord even more in those times.”

Soon after this decline, Wannemuehler’s father passed away after the nine-month battle with brain cancer.

“I had read somewhere, and this is such a hard way to put it, but, no matter how old you are, when you lose a parent, you’re still an orphan. I read that and it hit me so hard, like no one is ever going to take the place of him,” Wannemuehler said. “But, reading that was so cool because I never had such a picture of what it’s like that we are all orphans and Christ has adopted all of us. That picture has never been so clear in my heart before not having an earthly father here anymore.”

Sitting across from a smiling Wannemeuhler in a campus coffee shop now has a much deeper meaning.

There is a story of trial and triumph behind her light green joyful eyes, a story that molded her into a strong daughter of Christ who sees his blessings in each circumstance.

“When I call him Father it just has so much more meaning because those attributes I loved about my dad I can’t experience here anymore. So, the only way I can experience that is with God,” said Wannemuehler.