Back on the Road

Written by MBU Timeline on September 2, 2016. Posted in News

Missouri Baptist University student, Chip Bloch, shares the details of his unfortunate motorcycle accident and his road to recovery. 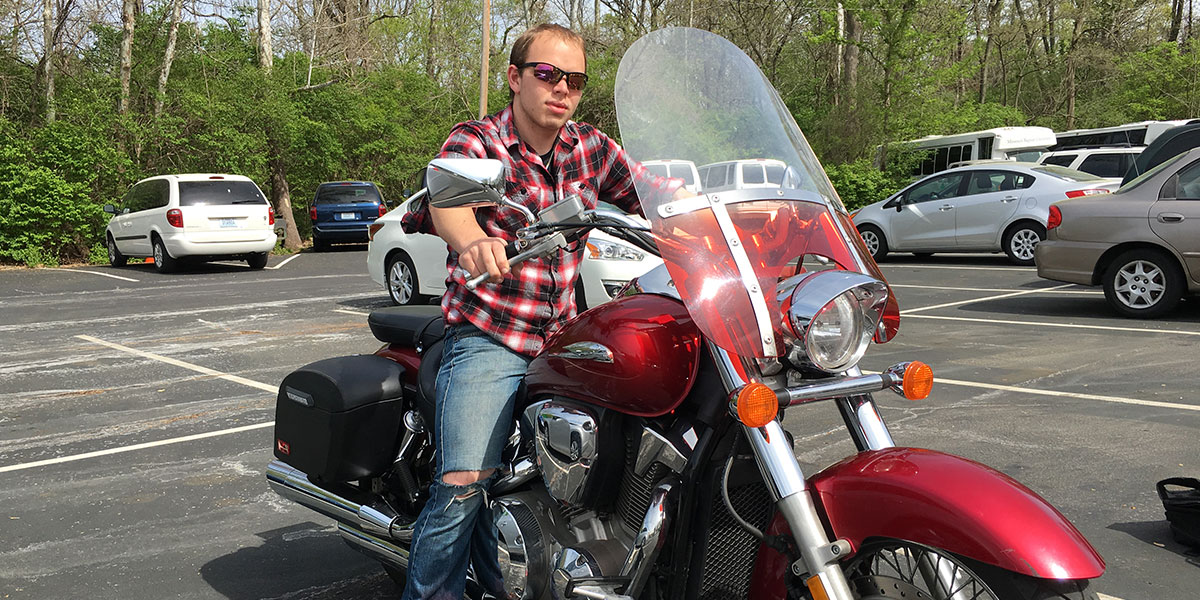 “I had so much adrenaline going on I didn’t even notice I had been hurt … then somebody ran up to me and said, ‘Dude, your leg is backwards!’”

It was just a couple weeks after school let out for the summer of 2014 when MBU student Chip Bloch was traveling on his motorcycle to the grocery store when he was suddenly struck by a car and thrown from his bike.

“I got knocked off, my bike went down; he was going probably 35 through the intersection, I was going about 40 through the street, so it was a pretty fast collision,” said Bloch.

Bloch described the severity of his injury, but also a bit of unexpected good fortune at the scene of the accident.

“When the car hit me my leg twisted 180 degrees, so the heel of my foot was pointed forwards,” said Bloch. “Sitting at the intersection, in two different cars, were an off-duty nurse and an off-duty EMT, so they were right there, that was amazingly lucky.”

The nurse and EMT examined Bloch’s leg and immediately called for an ambulance.

“It was broken in a couple of places — both the bones,” said Bloch, who was scheduled for surgery on his leg the following morning. “They cut open my knee and they put in an eight-inch-long titanium rod in my leg to support it, and then they set the bones around that.”

Even with the severity of his injury, Bloch wouldn’t let his leg sideline him for long.

“I got out of the hospital a couple days later and I started doing physical therapy that took about two or three months, until I could just walk on it without any kind of support, like without a walker, without a crutch or anything,” said Bloch.

Despite the use of physical therapy, Bloch still had to deal with pain in his leg and a limp in his walk for roughly a year.

Bloch immediately looked into taking legal action against the driver who hit him.

“I tried to sue the guy who hit me but he didn’t have insurance, which was really kind of annoying,” said Bloch.

Bloch’s insurance company only gave him a small amount to cover the cost of his bike, so he went to a lawyer friend for help.

His lawyer told him they could get a much larger settlement, because the insurance didn’t cover pain and suffering and emotional damages.

A year and a half went by before Bloch finally got a settlement. This past August, Bloch replaced his bike with a new one.

“I’m in the hospital, I’ve just got out of ER, I haven’t even had the surgery yet, so this is the same day I got hit, and I’m on Craigslist looking for a new bike,” said Bloch.

“Probably going to be the day I die I’m on a bike,” said Bloch, adding the accident “actually made me more confident to ride.”