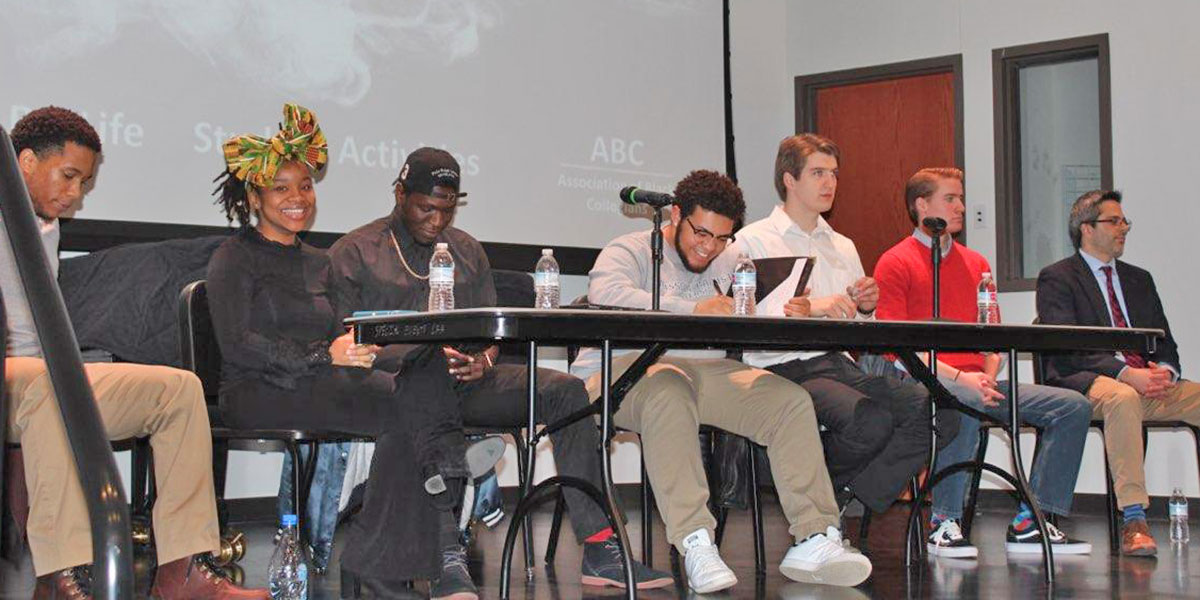 When referring to ABCs, people are usually teaching the alphabet to their children. But when you combine ABC and Missouri Baptist University, you get the Association of Black Collegians, an organization whose goal is to bring unity to MBU.

“Our goal is to bridge the gap between the African American culture with everybody else who aren’t African American so that there’s more unity on our campus,” said Ja’Nique Brown, president of the ABC.

Brown, a junior from Belleville, Illinois, who has been president of the ABC for nearly two semesters, was encouraged to become president by past leaders of the ABC.

Just as the president of the United States needs help running the country, Brown needs support to run the ABC.

People such as Ben Horn, treasurer and parliamentarian of the ABC, help keep the organization running smoothly. As treasurer Horn has the responsibility of finding vendors for the events. As parliamentarian, he makes sure that no one speaks out of turn and order is kept in meetings.

Horn, a senior information technology major from Fairview Heights, Illinois, said what drew him to working with ABC was the fact that the organization is a place where African American issues can be discussed.

“It was a friendly space for young black collegians looking to meet and educate each other and the student body here at mainly a white institution where black matters haven’t always been able to have been discussed,” said Horn.

Where do people like Horn and Brown find the courage to take on heavy responsibilities?

“I mainly look to Barack Obama. I feel like he’s just a wonderful role model. Me growing up, I wanted to be the first black president. He happened to do it so that’s just a very great accomplishment and I hope to follow in his footsteps one day,” said Horn.

While he doesn’t feel the desire to be the U.S. president anymore, Horn is determined to make a positive impact on the community.

“Maybe not president but that’s pretty much a big job. I definitely want to do something in public services,” said Horn.

While some find inspiration through their peers, others find it through one of life’s greatest teachers, experience.

This would be the case for Devin Cole, a sophomore biology major at MBU and a member of ABC, who said he was wrongfully detained by police last fall in Maryland Heights, Missouri, along with a friend.

So how do these students cope with issues like these? They fellowship with people going through similar problems.

“Going to these meetings helped me realize that all the problems that I’ve been facing, others have been facing too, and if we ban together, work together, we can find a resolution,” Cole said.

While the ABC’s main goal may be to unite students at MBU, they also look to make the world a better place.

“Following Black History Month, we will be having a service project because we don’t want to just focus on Black History Month. We also want to make sure that we’re out doing stuff for the community. Not just here on campus but also outside of campus,” said Brown.

Last year the ABC painted a dance studio for a dance team whose center was run down. They received new mirrors and new floors.

One motto the ABC tries to apply in their meetings is to allow everyone to respectfully say what is on their mind.

This concept goes for anyone who comes to the meetings, whether they hold a position, are a member or anyone coming to a meeting for their first time.

According to Diamond Guilford, a freshman accounting major from Lancaster, California, who regularly attends meetings, “It’s usually a big open discussion at the meetings. We’re always discussing current events that happened with the media and what happens within America.”

Regardless of the challenges, the ABC and its members are determined to take a peaceful approach.