Written by Shelby Wannemuehler on March 28, 2018. Posted in News

From the walls of a corporate office with no degree in hand, to an instructor herself, Mayfield has a surprising story of crushing her own expectations by jumping leaps and bounds out of her comfort zone. 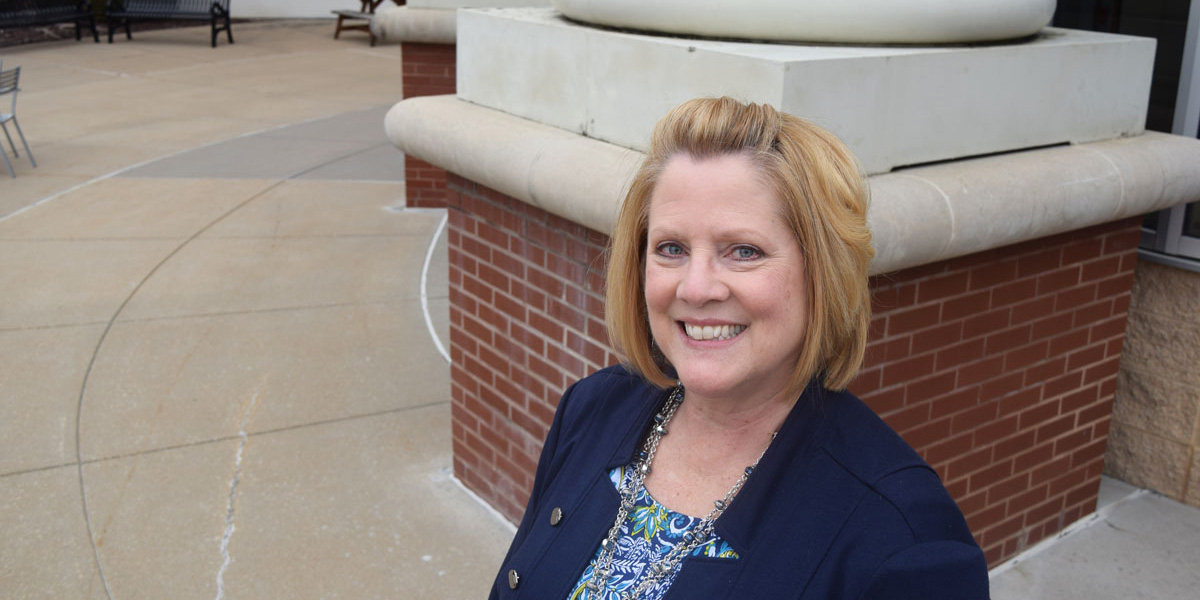 Humble, kind and inspiring are all words that describe Janet Mayfield, a familiar face at MBU who has worked directly for the three most influential leaders in the university’s history.

The assistant to the president might call herself boring, but her story is anything but boring.

From the walls of a corporate office with no degree in hand, to an instructor herself, Mayfield has a surprising story of crushing her own expectations by jumping leaps and bounds out of her comfort zone.

“I feel like I have been stretched. I learn something new every day. I am asked to step outside of my comfort zone often. It’s really healthy. It’s very good for me,” said Mayfield.

But to get to where she is today, Mayfield’s story begins years ago as a recent high school grad.

She started in nursing school right out of high school, but after three semesters at Meramec Community College, she fell in love and dropped out to get married and start a family.

“I had about 90 college hours and just kind of quit. Now, I’m kicking myself. But, back then, it was fine,” said Mayfield.

Mayfield ended up working as a senior account representative with group life insurance at General American Life Insurance Co. in May of 1983.

Mayfield managed a group of large policyholders and part of her job included traveling to those potential clients to pitch General American’s services at their sales presentations.

“Once they decided to purchase our products, then I was in charge of working with HR, setting up their eligibility and doing employee education meetings and things like that. It was a lot of fun. It was a great position,” said Mayfield.

After the account representative position, she gained additional experience at General American, managing in-house transitional aspects for large companies as they moved into General American’s products.

“I learned a great deal, even not having the college education. There’s a lot to be said of experience in the workforce. I think that makes a huge difference, it did for me,” said Mayfield.

She described the transition from working full-time to being a stay-at-home mom.

“My family grew and God was telling me I needed to be at home, so I had the opportunity to be at home as a mom. I worked part-time at church, just to keep my foot in the door and not stay at home all the time. I had the opportunity to do that for about 12 years,” said Mayfield, describing her position as she taught preschool three days a week and was the assistant director of Concord W.E.E. School.

Mayfield’s oldest daughter, Sarah Proemsey, graduated from MBU in 2004 as a psychology major and also attained her graduate degree in counselor of education at MBU, in 2007.

“So, when it was time for me to look to going back to work full-time, I just really prayed about it and a position opened up here part-time and, you know, I thought, wow, if I could get full-time and provide for college for the other two kids I still had at home,” said Mayfield.

So, Mayfield started part-time in September 2009 at MBU doing data-entry in the Records Department.

In November 2010, MBU’s provost and senior vice president of academic affairs, Dr. Arlen Dykstra, asked Mayfield to be his assistant.

“Janet brought a new level of refinement and discernment to this position. She quickly earned the respect of the university community. Faculty were comfortable approaching her with issues which were often confidential and time sensitive. I never observed any situation where she was not helpful, creative and a great problem solver,” Dykstra said in an email. “Quite honestly, many issues which could have easily landed on my desk were simply resolved in her office. Her winsome spirit was inviting to anyone who needed help.”

While working for Dykstra, Mayfield realized the opportunity available to her.

“I became full-time in November of 2010 and thought, wow, what an opportunity to finish my education,” said Mayfield, since MBU employees are eligible to attend the university tuition-free.

“During the time that I worked for Dr. Dykstra, which was just about six years, I finished all my education. What a privilege, you know, to be able to do that,” said Mayfield.

When Susan Rutledge, then-assistant to the president, decided it was time to leave MBU, Mayfield was asked to take Rutledge’s position.

“I was very flattered,” was all Mayfield could say about the prestigious honor.

Dykstra said, “Perhaps the clearest testament to her ability, lovely personality and deep commitment to kingdom work was when President Alton Lacey recruited her away from me.”

Dr. Lacey, who is retiring in May, knew he was going to choose Mayfield to be his assistant.

“I had observed her work as assistant to the provost. She brought an intimate knowledge of MBU and the faculty with her to the President’s Office which was very helpful to me,” Lacey said in an email. “She also already had a working relationship with my office and the other assistants.”

Mayfield’s character was shown to Lacey throughout the remaining time of his presidency.

“She is a person of great integrity and intelligence. She gets along well with everyone and is especially capable of dealing with people who are having problems with some aspect of the university,” Lacey said. “She is a committed Christian who lives out her faith on a daily basis.”

“She is a very honest person and I could always count on her to be straight with me even if it was something on which we disagreed.”

Dr. Keith Ross, MBU’s current president, who took his office for the first time this January, said Mayfield has been a valuable asset as he transitions into his new position.

“Janet is well organized and a good planner, which has helped me to successfully navigate the transition into my new position,” Ross said in an email. “She has a unique ability to carry out her duties in a calm and effective manner. Her outstanding communication skills and warm personality are a great asset to the president’s office.”

When sharing about her love for MBU, Mayfield’s heart is truly revealed.

“I really feel like God put me here. Like, he just transplanted me here. The position that I am in was something that I would never have earned,” said Mayfield. “I think He put me here for this season, knowing my spiritual gifts of being administration, which I had always thought, oh how boring. But, He showed me how, no, it’s really not boring, it’s really fun when you are in a field where you are really using the gifts God gave you, it’s just a lot of fun.”

But, Mayfield’s favorite quality about MBU is the people she has met over the years.

“My favorite thing here is the sense of community. Having worked in corporate outside of MoBap, it is just so different to have people genuinely care for you,” said Mayfield.

“You can talk openly about your faith. You pray for each other. Seeing how decisions for the institution are bathed in prayer, people just care for each other here. And, there’s a human element just like anywhere, but there’s nothing like the environment to work in like MBU.”

Mayfield shared how deep a connection she has made with her colleagues.

“I have developed some friendships I think I will have for the rest of my life. It’s just a great place to be. I’m very blessed, just very blessed to be here,” said Mayfield.

Ross said, “Janet loves the mission of MBU and reflects the love of Christ in all she does. She is not only a colleague, but also a friend.”

“Janet was widely described as a Godly colleague, mentor and friend,” said Dykstra.

Through all her hard work, she has accomplished above and beyond what she could have imagined when she began working in the Records Department.

Mayfield obtained her master’s degree in the summer of 2017. And, in the second eight weeks of this semester (spring 2018), Mayfield is starting a new journey, this time being an instructor herself.

“So, because of my background and finishing my education — I definitely had to have both — I am being allowed to teach Management Concepts and Practices. I have got two sections. … I am really excited,” Mayfield said of her adjunct teaching position in the Business Division.

Because of her background, Mayfield believes she will be a valuable asset to the adult learners she will encounter in her classes.

“I took online courses as an adult learner, and I am very organized, so I know what my expectations were as an adult student. I think that will make a big difference in how I respond and being excited about it. I am really excited and looking forward to doing that,” said Mayfield, whose two sections of the class will be offered online.

Not only are Mayfield’s accomplishments something to admire, but even more so, her unwavering character that can be seen when anyone steps into her office.

Mayfield also mentors students at MBU and has been able to share her faith journey in the workplace and the importance of integrity and character.

“We talk about just how important having integrity and character is in your leadership style. It’s just so important, even if you are not able to share your faith. People notice something different about you,” Mayfield said. “They know by who you are and how you behave in the workplace and decisions that you make. They can just tell you are different. People will ask you. I have had that happen. It’s definitely a life journey of learning.”

Mayfield’s life and journey at MBU are a total reflection of God’s sovereignty.

“It was all the hand of God. You know how you can look back at your life and you can see God moving you along and trusting Him in your life,” Mayfield said. “Every experience changes you. Whether a hard experience or a really fun experience, it’s gonna mold you to hopefully be more like Christ wants you to be. And the more you honor Him, I believe if we are being obedient, that God will bless us in whatever that looks like.”

Mayfield beautifully summed up a life of following Christ: “It’s hard, but it’s good. It’s worth it.”

And, as Dr. Dykstra said, “MBU is a better place because of Janet Mayfield.”