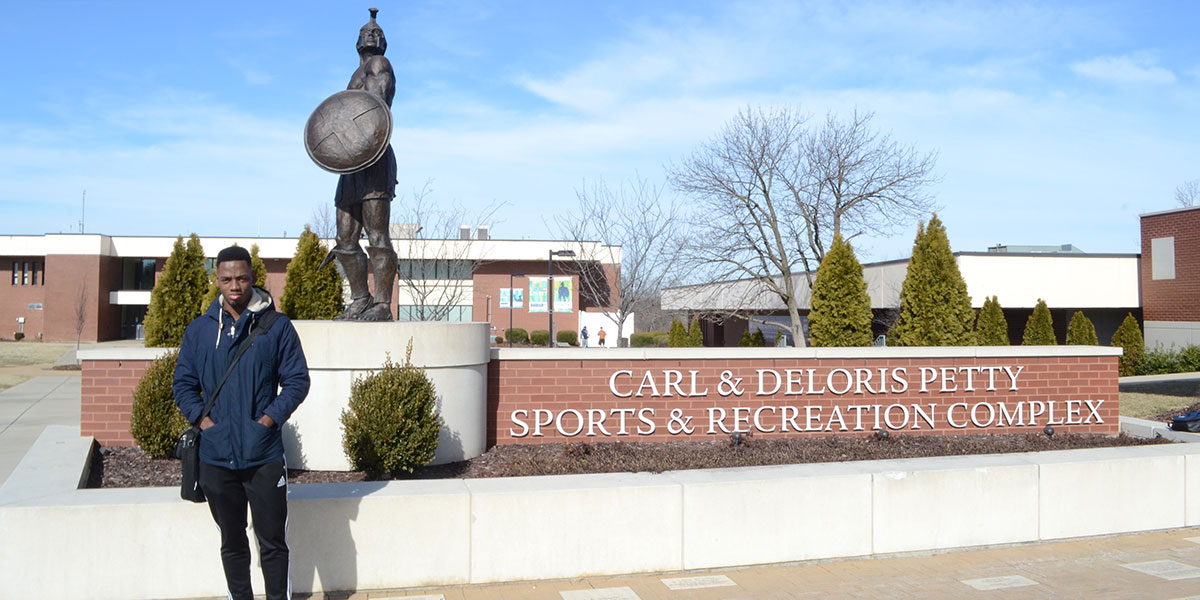 Dwight Degazon, 24, is a newly-graduated international student from St. Lucia —
an island in the Caribbean Sea, which is south of Florida and the U.S. Gulf States — who attended Missouri Baptist University for four-plus years, and just a few months ago attained his degree in information technology with a minor in business administration.

For a long four and a half years, Dwight dedicated his time living away from home, facing daily struggles while getting accustomed to a different culture, different weather and different people who became part of his story somehow: friends for life.

Since the beginning of his trajectory in the United States, Degazon already had a plan for living after graduation. Day-by-day, his dream of getting a job in a qualified American company was becoming more attainable.

This idea grew in his mind not because he doesn’t like his native country — located northwest of Barbados and south of Martinique and flanked by some of the most beautiful ocean waters in the world — but as with many Caribbean countries, St. Lucia has not been enjoying social and economic prosperity in the past few years.

“St. Lucia’s economy is similar to any other third world country where it is still seeking growth and development in both infrastructurally as well as financially,” Degazon explained. “The country has not fully shaken off the effects of the last global recession due to its size.”

St. Lucia is a nation of only 238 square miles, a total population under 200,000 and tourism as its primary source of income. Offshore banking and exports of bananas and oil add to the struggling economy.

With that being said, the Caribbean soccer player has been committed to his studies in order to accomplish his American dream some day.

Due to Degazon’s fluency in English and his soccer skills, Jacob Alvernia, MBU men’s soccer head coach, presented him an opportunity to write this new chapter in his life by offering him a scholarship, bringing the Caribbean soccer player to his roster.

Throughout his soccer career, the St. Lucian boy has received some notable awards, such as NAIA Honorable Mention after the 2014-15 season, and being elected “man-of-the-match” (Most Valuable Player selected by teammates) five times.

After his four years of eligibility expired, he claimed it wasn’t how he had expected before becoming a Spartan.

“At first, I felt not welcome, however, as the season went along, I proved that I was a good player and things began to change,” Degazon recalled. “I also struggled financially because I was not given the scholarship amount that I deserved while other players received almost full tuition.”

All of this passed. Nowadays, Degazon faces a tough reality of getting a job in the St. Louis area. Although he knows his chances of getting a job with a college degree are much greater than without one, it does not guarantee anything after graduation.

According to the U.S. Department of Immigration, international students are allowed to remain in the country only while studying. Normally, four years are permitted by the U.S. government, which is the proper time to finish a degree program.

With that being said, Degazon has been in the United States for four and a half years, and his student visa is about to expire, which makes him feel doubtful about his future.

Regardless, Degazon keeps working at a local company called Crossover Media, as web developer/application developer in St. Louis, sustaining himself.

The struggle is, some of the companies don’t apply work visas to all the international employees, which is Degazon’s case. Therefore, once his visa expires, Degazon will need to decide on staying or going back to St. Lucia.

He’s still looking forward to getting a job in which the company gives him all the required paperwork to become a legal employee here in the U.S., ensuring he stays legal under the law.

Meanwhile, his parents live in St. Lucia, approximately 2,500 miles away.

For those who are still studying and expecting a better and satisfying life after graduation, Degazon offers this advice:

“Be proactive and learn more about your field of study on your own. Don’t wait f0r a teacher to teach you. Seek internships before you graduate, so that you have a job ready and experience when you’re done.”