PART 4: THE DAY THE WORLD CHANGED: On the 20th Anniversary of September 11, 2001, MBU Faculty and Staff Remember and Reflect

Written by Madisyn House on September 15, 2021. Posted in News

In the fourth of our 8-part series, Dr. Kathleen Bauer, assistant teaching professor of the school of education, Ronald Pruett, housekeeping staff member, and Dr. Kathy Roseland, assistant professor of nursing, reflect on Sept. 11, 2001, remembering the 20-year anniversary of the infamous day. 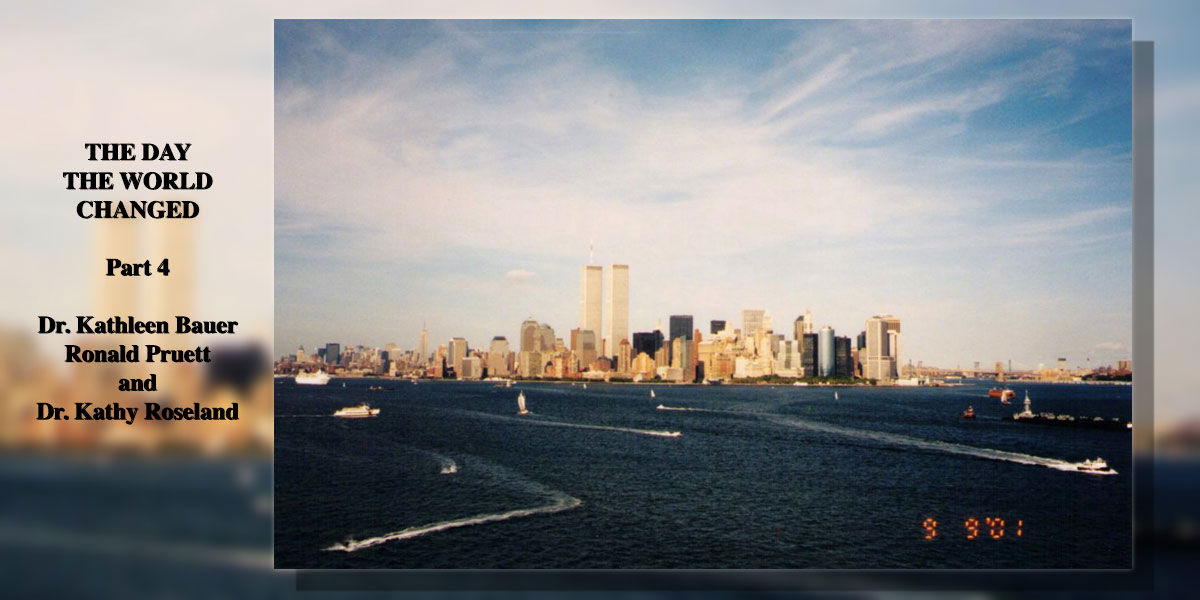 The North Tower and South Tower of the World Trade Center in New York City collapsed during the terrorist attacks on Sept. 11, 2001. This photo was captured by MBU’s Heather Goodin  just two days before America was changed forever. Notice the date stamp in the bottom right corner as this photo was shot with film.     Photo by Heather Goodin

This story was posted at 8:59 a.m. Central time

“I remember that day our world changed significantly. I remember where I was standing, who I was with and two very poignant phone calls I received within the time that things came to pass. So, at that time I taught in an elementary school, in a kindergarten classroom. And it so happened that that morning our students had PE class, so we walked them down to the gym, I say we, my team of teachers and I. And when we got back into our classroom another teacher from down the hall said, ‘You’re not gonna believe it, this is unbelievable, something terrible has happened.’ We all had, at that point, TVs in our classroom. We didn’t have smart boards or very much access to a whole lot of technology at that point. You know, maybe one or two computers in the classroom. But we turned on the news and saw the replay and it just felt like a nightmare.”

“Of course I thought about my family and wanted to make sure they were OK. And my dad, who was a man of few words, a Korean War vet, a banker in the business world, had retired, literally called my school to reach me through my secretary and my phone rang in the classroom. So you know when my dad, who has never called me at school or work in my whole life, right, called me, then I knew something was up. … He’s a bit of a history buff and he explained his take on the situation and that was that for that phone call.”

“And then I called my husband to check in on him, and he said, ‘You know, I’m pretty sure David (their son who at that time was in elementary school near their home) and I saw this on a news report right before we walked him out the door to school.’ He said, ‘I’m on call to come get you if I need to or to go get David.’”

“The world just became a little bit more somber that day, I think for all of us. And the residual of that is, in a kindergarten classroom, I had parents calling in like crazy making sure the school was safe, things were safe, of course safety is your priority when you’re an educator, when you’re anywhere right? So the residual effect that I speak of, days, weeks, months later, I think for the immediate impact, everybody in America got a little bit kinder.” 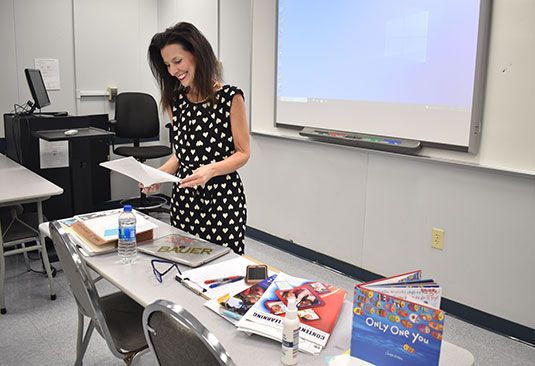 “I liken that to flying home the day before the shutdown of the pandemic. Everybody was a little bit kinder, right? I see some parallels there. When we face crisis we dig deep and we find that kindness.”

“Then I noticed a raised level of awareness for safety and intensity in my area of career, which was school teaching. Parents were all over the place, parents of the students that I taught in kindergarten: I do want them to talk about it, I don’t want them to talk about it. But the thing is in a kindergarten classroom, once one child has seen a little blurb in a news report, they start talking about it. So we had to, you know, reaffirm that we were all for America, that we were for peace on Earth and we didn’t know what tomorrow would bring, but we would do our best to walk toward it.”

“Soon after the first plane hit, they announced it … this is either a joke or a terrible accident. A few minutes later after the second one hit and they announced it, we all kind of came to the realization that this was on purpose. This was no accident at all … we’re under attack.”

“My oldest daughter at the time was a toddler … I remember, I don’t know if it was that day or the next day or two right after that, when I went home and I just grabbed my daughter and I just clutched her.”

“With the whole chain of events that day, it was just like, I just kinda felt like, ‘Is this just a bad dream? Well somebody pinch me and wake me up, like no, this didn’t really happen.’”

“Where I worked at the time was out in Maryland Heights … and I was used to going outside to  carry some trash out to the Dumpster. 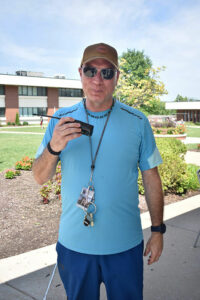 So you’d walk outside to the Dumpster and it was so weird for, and I can’t remember how long it was, but just looking up to the sky — there’s no planes up there. They shut down the airspace. I mean, nobody was flying. It was just the creepiest thing because, like, right there it was kinda in that direction, where we were was kinda in the flight path. They would fly over there to the airport.”

“Like with me, I served, I had served in the military prior to that. And … well … this is why I served … my thought was, ‘We can’t be defeated by this, we gotta take the bull by the horns and punish those who did this.’”

“So Sept. 11, 2001, I was in nursing school and I was doing my clinical rotations and that particular day I was asked to ride with an ambulance service and go out on calls with them. This was in Vidalia, Georgia, which is just a very small small town. So the ambulance, the EMTs and myself, we had gone out on a call and we came back into the office and we were just like sitting there and the ‘Today Show’ was on and somebody said, ‘Hey, come over here and check this out, somebody hit the World Trade Center with an airplane.’ And we were like, ‘Oh wow, look at it.’ We kind of like all were just watching TV and, like, you know, nobody could, it was strange because it was just like an airplane hit, nobody knew what was going on.”

And we were like, ‘Oh my gosh another plane hit the tower.’ But I remember there was a lot of confusion and just trying to figure out what was going on.”

“So after that plane hit, we were just sitting there and there were no other calls that came into us, but then, in about an hour later, calls started coming into the ambulance service, like nationwide calls, because nobody knew what was going on, you know? And then we started getting reports like the Pentagon had been hit and there was another airplane that had been taken over in the one that crashed in Pennsylvania.”

“So these calls were coming out to the local ambulance services to be on guard. So we were just like in this small town like, ‘Uh, what are we gonna have to do?’ We didn’t know what was going on. So … I just remember there was a whole lot of confusion.” 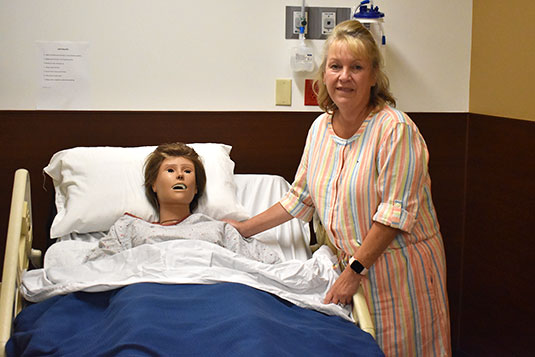 Madi House is a staff writer, photographer and editor for MBU Timeline. She is a born and raised St. Louis girl who is majoring in communications studies and minoring in worship studies. House owns her own photography business, MJ Photography, and writes for her own blog, keepgrowin.wordpress.com. Along with working on these platforms, she loves to spend time singing and playing her guitar and ukulele. She works as a social media intern for a non-profit and a writing coach in MBU’s Student Success Center.