Teaching the Future to Hear the Music

Written by MBU Timeline on February 3, 2017. Posted in News

Mark Roach, MBU’s new Fine Arts Division adjunct instructor, has taken on the job of shaping future sound engineers with his own flare and experience. 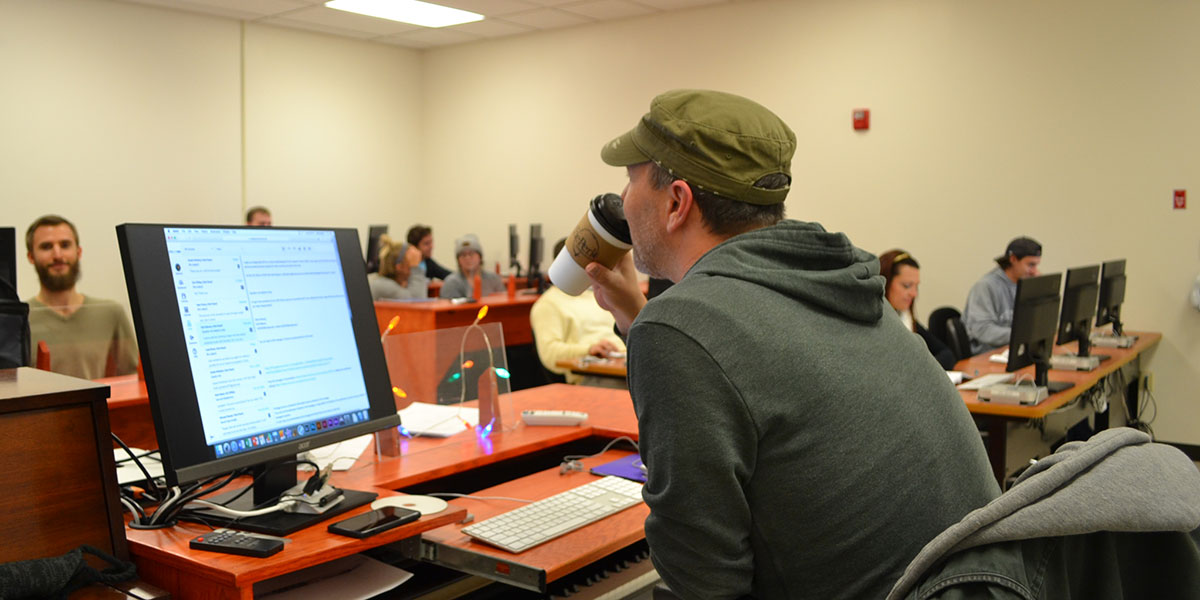 A man in a green cadet hat, blue jeans and zip-up hooded jacket walks into a classroom of 14 students.

With a bright smile on his face, he explains all the reasons why audio is “awesome” while capturing his students’ attention with his abstract drawings and enthusiastic energy.

His eagerness to pass on all he knows is undeniable and his adoration for the subject is infectious.

You would never know this was his first year teaching at a college level.

Mark Roach, a new adjunct instructor for the Fine Arts Division at MBU, brings a degree in commercial music from Millikin University in Decatur, Illinois, and several years experience in the industry.

“In terms of audio, I have always had an interest in recording and performing, kind of both sides of the mic,” Roach said. “As young as high school, I remember having a little 4-track recorder, back in the day they were so different from what we have available to us now. But I went to school for commercial music and so I was very involved in studio recording classes there.”

In 1996, between his junior and senior year of college, Roach spent his summer on the crew of a large traveling group from central Illinois, learning a great deal about live sound application.

His senior year of college he mixed, engineered and produced a record for a jazz group called One Voice and that summer returned to the traveling group as a production crew chief.

“Then I moved to Nashville, spent a little time there, and came back to St. Louis and immediately got involved in a church. And at the church I was basically the leader of all the tech ministries and the music ministries,” Roach explained. “So there I was again on both sides of the microphone, leading worship, purchasing and maintaining all of the sound and tech equipment and produced some recorders there. But also was leading worship and writing songs.”

His credentials reach even further with his own personal journey as an artist.

“I recorded my first demo in high school but my first full length record I recorded in the spring of ’97 as my senior project,” Roach said. “I was signed in 2006, recorded in the fall of 2006 and released my debut record ‘Every Reason Why’ in July of 2007.”

“So some of the most influential men and women in my life have been my teachers, from … elementary school all the way up through high school and through college,” Roach said. “It’s always inspired me, the idea of how they poured into me and the idea of being able to pour into someone even a microcosm of the way my teachers affected my life: spiritually, intellectually and in lots of other ways.”

Roach felt he had big shoes to fill.

“He’s a fantastic instructor. I’d probably say one of my favorite instructors I’ve ever had,” said Aaron Feeley, a junior at MBU who is majoring in broadcast media.

Coming into a new career there are fears, and Roach was not immune to them.

“I think the biggest fear I had was that people wouldn’t like me. You know, the kids wouldn’t want to learn. [They] just wouldn’t like the way I presented or just wouldn’t give me the time of day,” Roach said. “I still feel like a college student but … I’m 41 so I have this realization that I am not that age and so I wanted to be able to relate and … offer up my passion and I wanted the students in the class to be able to share that passion and absorb it.”

With this being Roach’s first semester this is a logical concern.

Speaking with his current students it’s obvious that fear is not an issue.

Steve O’Neal, an MBU senior studying communications studies, said, “The class has actually been a lot of fun. I love the fresh perspective that we get and it’s made me think more theoretically about what I do when it comes to sound stuff.”

Roach’s students confirm that once he found his niche he flourished as an instructor.

“I think he has very high expectations and is very professional but in a very down-to-earth kind of way. He makes it fun,” said Linda Brady, a music and worship leadership major who is in her sophomore year at MBU. “He is very accessible to students and wants people to be successful in his class.”

Roach is leaving his mark on many students’ lives and it will be interesting to see what the future holds for this young instructor.

“I think, long term, it would be amazing to keep in touch with some of these students that I’m teaching, even this very first semester, and just see them sort of ignite and funnel passion and get big careers and just know that maybe in some small way … I certainly was a piece of their puzzle,” Roach said. “I was part of that journey that they took to whatever they define as success. It would be so cool to see in 30 years who has had way more success than me but really did get a passion for audio because this crazy guy sat up in front of them and was jumping and shouting about how cool audio was, that would be amazing.”