Written by MBU Timeline on December 24, 2013. Posted in News

Kris Cook, who was re-elected Student Government president, has plans for the organization to grow, expand and, most importantly, get students involved. 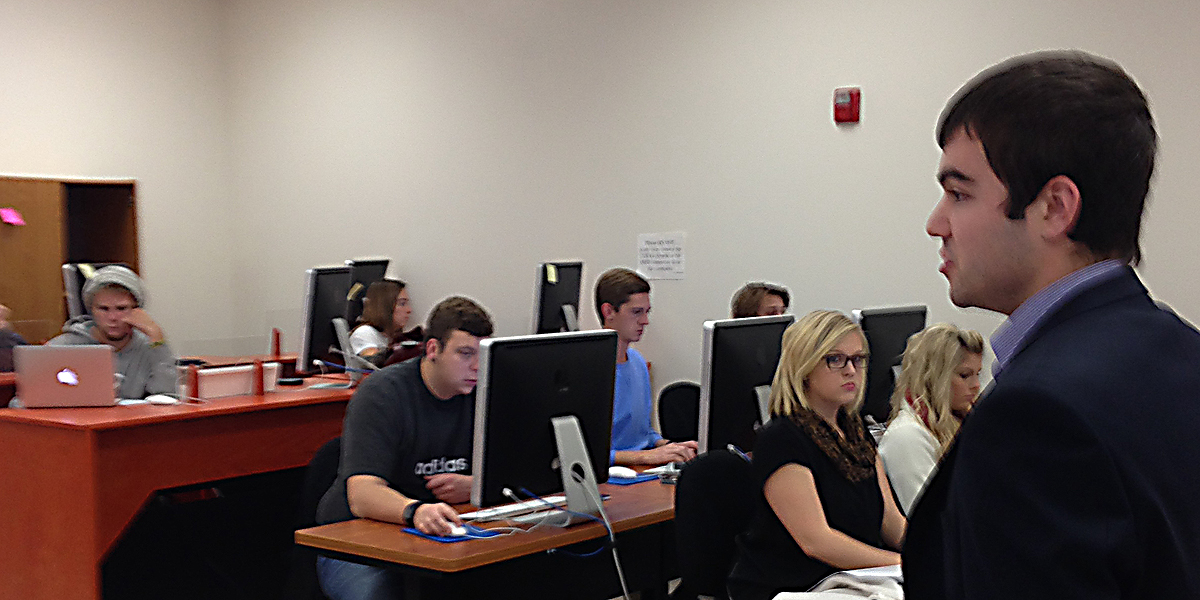 Cook, a junior from Scott City, was appointed president by Lara Hines, director of Student Activities, after Daniel Defonce, the first student body president, passed it over to Cook last spring.

Cook said that while in the future he would like to see a campus-wide election, the first election was held only by the Senate, a division of the Student Government.

After being appointed president, Cook seeks to follow the Student Government Constitution where positions are held from January to December of every year and then voted on at the end of a current president’s term. There are currently 13 senators in Student Government, with one representative coming from each student organization on campus.

“Senators will nominate who they want to be the next executive head, and then from there they’ll vote,” said Cook, who spoke recently during a student journalists press conference in the MBU Communications Department. “I tell people it’s important to get involved because it makes campus better.”

Still at the beginning stages of developing Student Government, Cook said he has a lot of goals for the future, one being election campaigns throughout MBU. He hopes to see the voting go from just the senators to the entire student body.

Cook’s goal for elections would be “in the fall, beginning in August, campaigns will start running, people will get on a ballot, and then from there be voted on by the student body.”

Cook said he also seeks to expand the Student Government body. While voting for the next Student Body president, the senate will also vote on creating a new amendment permitting the creation of a student House of Representatives.

The ultimate goal would be getting MBU students more involved with their university.

“At MoBap we’re kind of disjointed in what goes on around campus. People kind of just do their own thing and find their own crowd to just fall into,” Cook said. “I kind of fall into that trap too, but because of student government, I can see the vision for the future, that with more involvement from students, people come together, kind of meeting in one place. We can make our campus more of a community. We can kind of take ownership of Missouri Baptist, so it means more to go to Missouri Baptist than to say, ‘Well, here’s my pocket of friends that I hung out with.’ You can say, ‘I went to Missouri Baptist and I know a lot of people on campus because we were connected.’”

Initially under the prospective amendment, no more than five students would be allowed on the new House of Representatives. There are currently three executive members on the Student Government, Cook, the president, Eric Gustafson, the treasurer, and Sam Robb, Cook’s assistant.

“Awareness is first and foremost before involvement,” said Cook, because awareness leads to progress. “What it means is that when students have a problem, they get to come and share it with me. You can complain all day long, but it doesn’t accomplish anything. When you get organized and go to the student government, we are there to assist you and accomplish the thing that you are trying to accomplish.”

The Student Government was recently able to gather 140 signatures from students on a petition regarding better campus Internet service, a petition which Cook was able to take to Dr. Andy Chambers, senior vice president for student development and professor of Bible. “That’s the Student Government in action. That’s how it works.”

Cook, a politically minded history major who has worked internships alongside current political leaders like Sen. Roy Blunt and U.S. Rep. Ann Wagner, also hopes to increase involvement with other student organizations. There are currently 13 student organizations involved with the Student Government.

“What we saw before was that the clubs would do their own thing,” said Cook. “By coming to the Student Organization meeting, clubs can interact with each other.”

Getting involved with Student Government is beneficial to all clubs. One recent trend is combining events between two clubs.

Cook, a junior varsity basketball player for the Spartans, said another plan to make MBU more of a community is to create student meetings where students can bring concerns directly to the Student Government.

“I think it should be a time when it’s open,” said Cook, “I don’t want people to be afraid of stepping on toes. I want to hear what people have to say. I know things here aren’t perfect, and I want to hear the concerns because if we don’t hear them, we can’t do anything about it.”

Cook can be accessed through personal email, 1126480@mobap.edu, or Student Government email, sga@mobap.edu.

Cook said his job is to communicate, speaking to administration and different types of groups throughout MBU and getting people involved.

“Communicating makes campus better. People find their own crowd and are divided. With more involvement from students, our campus can be more of a community and make this campus connected,” Cook said. “We can accomplish things when we hear them. We have to hear things to accomplish them.”