Written by Emma Tihen on October 11, 2022. Posted in Opinion, Updates

Most people tell stories, stories of their past, their friends, their families. My grandpa had a story he told to every one of my siblings. It was a story, but it was also a lesson. He was always focused on lessons, always focused on helping us become the most compassionate we could and always encouraging us to do our best. 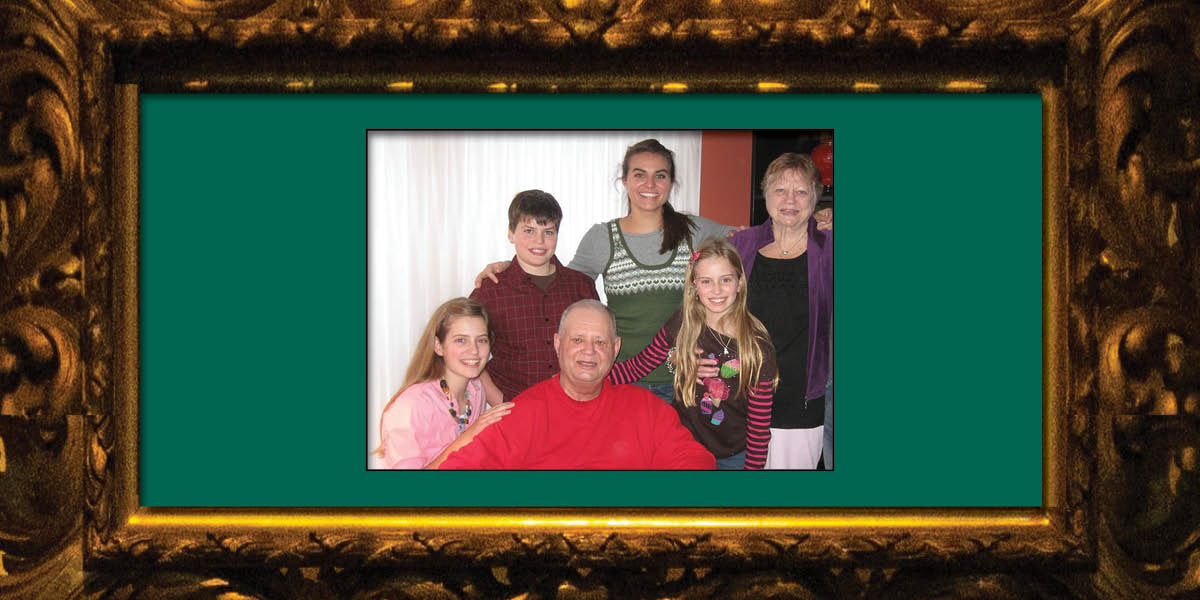 Kenneth Tihen Sr. and Joyce Tihen smile with four of their grandkids at a one of our many wonderful family gatherings. That’s me on the right with the black-and-red-striped sleeves. Photo by Lisa Marie Tihen — Graphic illustration by Isabel Rinkenberger

The sun shone through the pristinely crystal clear windows that let in beams of light to bathe the cozy living room where we had spent so many memorable days and evenings relishing each others’ company, which I often wondered if we took for granted.

The cranberry red leather chair which had claimed its territory since it had been moved into the house matched the vibrant red paint of the walls which, although it had covered the walls in the living room for as long as I could remember, never showed any type of wear and looked as though it had just been carefully spread on a day before.

Next to my cherished grandma’s red chair rested a tall, green, cloth recliner in which my grandpa always sat, the TV remote comfortably in its home in the small, black canvas pocket caddy hanging over the right arm of my grandpa’s chair. Against the side wall lounged a sandy tan three-section couch with a timber brown leather Ottoman at its foot. That sofa was the seat generally occupied by my grandparents’ beloved stubby black Dachshund affectionately named Sugar, a name that perfectly encapsulated the old dog’s sweet attitude.

Every time I visited my grandparents, I knew the first thing I would see when I entered the home, moseyed through the great entryway, padded through the kitchen barefoot from the shoes I already eagerly shucked and entered the living room, would be my grandpa resting in that old, worn, green recliner. 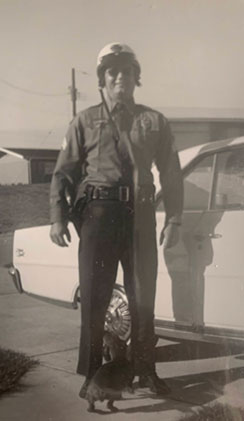 Kenneth Tihen Sr. stands in his driveway wearing his police uniform while his first dog Poppy welcomes him home. Photo by Joyce Tihen

Grandpa had a fervent desire to help the less fortunate. He was always giving to children who had no families, those in orphanages, those in underdeveloped countries, those who came from broken home situations.

It was from that saggy old chair that my grandpa told his story. A story he told to every one of my siblings.

I have four. All older.

It was a story, a lesson he used in teaching us thankfulness and compassion for others, and it was one he only told us when we were at least 16 years old.

Having been a paratrooper in the Korean War, a motorcycle police officer for the Brentwood Police Department where he rose to lieutenant rank before leaving to become a criminal investigator with the St. Louis County Prosecutor’s Office, and a military policeman during his service with the U.S. Army, Grandpa had seen many things during his lifetime, and I knew he had a plethora of stories to tell us.

I remember being at my grandparents’ house with all of my family, my four siblings and my parents. We would go to visit, to celebrate and to help out around their property, and every time I was there I knew I could anticipate snagging a sticky pinwheel or a glass of rich, chocolatey milk Grandma unfailingly ensured was stocked and ready for snacking.

There was never a given time when Grandpa would tell his story, but the opportunity came sporadically. Every time he taught his lesson of thankfulness and compassion, if I had entered the room, I was made to leave until the story was over because I was not yet old enough to hear the life lesson.

Then I would be allowed to come back into the room.

Given that I entered the room sometimes when Grandpa was telling one of my siblings the story he considered invaluable, I unintentionally heard snippets of the account. Just words. Just parts. But not enough to piece together any kind of coherent story. 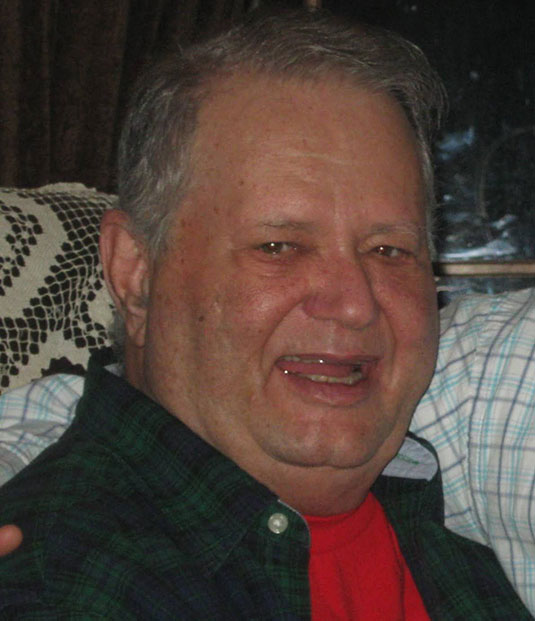 I always wondered why Grandpa would only teach us his lesson once we were at least 16. I thought there must be some sort of intense or mature aspect to the story. Otherwise, he would have just had all of us kids sit down together and listen to his life lesson. Honestly, I wasn’t too sure I necessarily wanted to hear it if I really did have to wait until I was 16. It must have been really intense.

Although I couldn’t be sure, I had a feeling the story was related to something happening in those underdeveloped countries for which he had such a passion.

When I was 15, I recall my grandpa telling me he was going to share the story with me the next year. The year when I was 16, my grandpa was in and out of the hospital dealing with his health. That year passed, and he had not told me the story.

Grandpa never told me his story.

The next year, when I was 17, my grandpa passed away, going joyfully to be with the Lord where I am comforted that he is in eternal bliss and where I will someday see him again in our eternal home with God.

I’ve never asked my siblings what the story was because it almost feels like a story I could only hear from my Grandpa and one that would only carry the same importance if he told it to me.

Maybe I will ask them someday, but for now, the story remains a mystery to me.

Every time I think of Grandpa’s story, I am constantly reminded of his unreserved and passionate love for those who had little or less than he had, and his example serves as a continual reminder to me to be thankful for what I have and to share with those who are in need, whether it be material goods or simply a loving word.

His model of generosity is a perpetual reminder of what Hebrews 13:16 says.

“And do not forget to do good and to share with others, for with such sacrifices God is pleased.”

Emma Tihen is a university ambassador for MBU and staff journalist for MBU Timeline from Washington, Missouri. Tihen is majoring in journalism and is a vocalist and bassist for Spirit Wing Red Team, an acoustic worship group at MBU. She is co-leader of the worship team for her home church. Tihen enjoys growing her relationship with God, spending time with family and friends, adventuring outdoors, disc golfing and composing worship music.