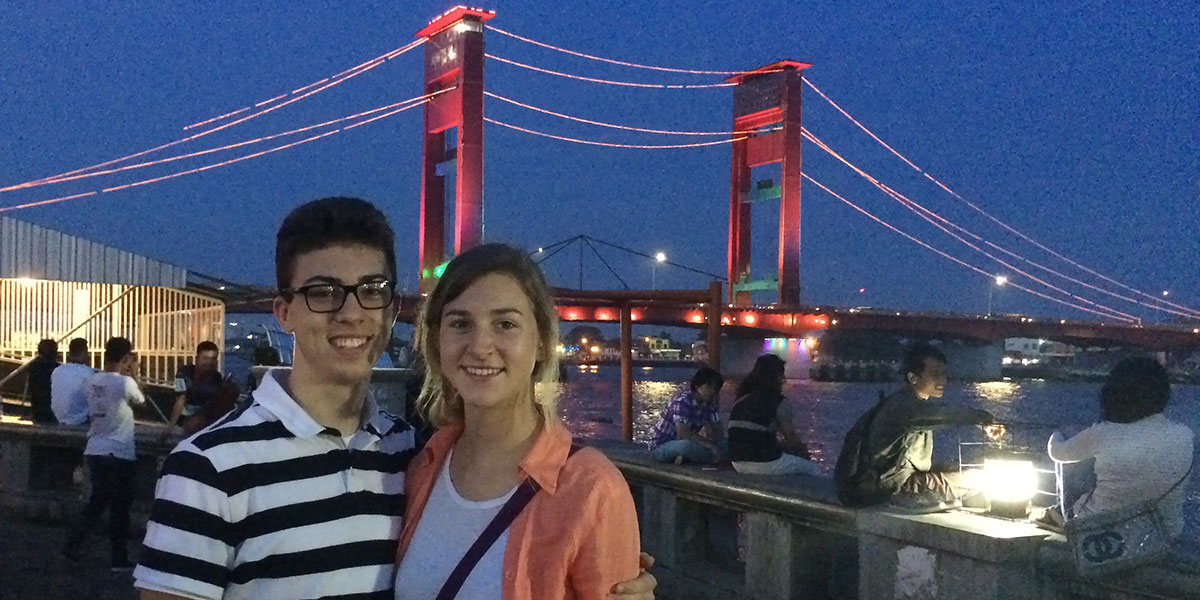 What call of the gospel would cause two Missouri Baptist University students to spend their summer in a continent far from their home? The answer is there are 4,105 unreached people groups globally and these two students were obediently answering a call to go to those who they have never heard.

An unreached people group is an ethnic group or nation in which they do not have clear access to the gospel because there is little to no Christian movement or it is too low of a percentage of Christians for the country to be reached.

So that means 4,105 groups without access to who Jesus is and what great lengths he went to for them to receive grace and life.

What if you were called to these people? What would it look like to tell those who have never heard?

For Davey, a senior at MBU, it began with a speaker.

Former MBU student, Philip Parrish, was speaking in St. Louis about a trip he had taken to Southeast Asia and reaching the unreached in the country, and Davey was hooked.

He knew he needed to go and the following summer of 2014 he did just that with Parrish, who was also obediently answering God’s call in Southeast Asia. For safety reasons the country to which Davey and Bertels traveled cannot be named as they continue to work and create relationships there.

The trip is different than what most mission trips look like.

The first difference is the trip can sometimes only involve as many as two people choosing to go, rather than a large group from a single church or organization. This was the case in Davey’s first trip, just two of them traveling to the other side of the world.

There are no work projects to complete or specific time frames that all team members must stay, but instead the trips are independent and relationally based.

“So many mission teams go somewhere and expect the missionaries who are already living there and doing what they’re doing to come out of their normal position, stop their daily tasks or add onto them. It’s almost like a burden on the missionary for a mission team to come and we didn’t want that,” said Davey. “We want to be meeting with them and encouraging them and helping with whatever they need, but we do not want to be like, ‘Hey, we need a ride to the mall’ [or] ‘can you come translate for this person.’ So kind of being inundated in the culture was necessary.”

Each member of the team that goes creates relationships and friendships with natives of Southeast Asia to share the gospel through long-term, close friendships formed on the trips.

Team members use public transportation or walk when meeting with individuals in Southeast Asia.

They most often do not stay with a missionary but instead in hotels or with friends, sometimes meaning they are miles away from other members of the team.

They sometimes even travel with individuals they meet in Southeast Asia across the country for vacation.

To go on the trip means to live like you are from Southeast Asia.

“It was really overwhelming at first because I was really undertrained. There was no kind of set-up like we have now … I got there and obviously it is a 12-hour time difference so I was just super-overwhelmed, very tired,” Davey recalled about his first trip, in 2014. “I did not know anything about the language, I felt really unprepared with security stuff and things I should and should not be saying. It was overwhelming at first.”

“As the week went on I kind of came to realize that the details were not nearly as important as going out and being with these people and getting to know them and then ultimately sharing the truth with them,” said Davey.

Upon coming back from that summer he began talking to his girlfriend, now fiancé, Anna Bertels, about the trip.

Bertels, a junior business major at MBU, was already heavily involved in mission work in the country of Zambia, where her family runs a nonprofit called African Vision of Hope, which provides help for impoverished people in Zambia.

However, Davey’s story about Southeast Asia began to slowly have an impact on her heart for that region and the unreached.

“Caleb got me to listen and then the Bible calls us to go and share the gospel,” said Bertels.

Her first trip was not a simple one.

Incidentally, she was the only girl on the trip out of 10 total who went and was not used to being completely immersed in a new culture and a new language.

“I think I had culture shock the first two days probably. I remember getting there and we went to this breakfast and I just sat there with my breakfast food and I was like, what the heck am I doing? And I was like, I am literally going to be here for the next six weeks, and I was mortified,” said Bertels.

“I was like, this is not like Zambia. My family is not here. I do not know what anyone was saying, I couldn’t read any of the signs, just like very out of my element,” said Bertels. “I didn’t eat the food. I didn’t really say much. I was just pretty … quiet for the first few days because I just didn’t know why I was there quite yet. I was definitely confused as to why the Lord had brought me there for sure.”

Bertels said Davey was also a comfort to her while there.

“I really trusted him and he was really gracious. He would come walk all the way over to where I was staying, like miles, and take me places, which I really appreciated because I was pretty helpless there because I couldn’t leave by myself, I did not know where I was. I did not know the culture at all yet,” said Bertels. “But it was hard because I did not have the fellowship of a Christian girl that I could be like, this is what happened, and pray with her.”

In Zambia, where Bertels had gone nine times before traveling to Southeast Asia, the culture is much simpler for Americans to adjust. The majority of people speak English and while Bertels was there she was with a body of believers and praising the Lord. It is a semi-Christian culture.

“We are all one in the faith while we are in Zambia because we are working with Christians while we are there,” said Bertels.

This is in stark contrast with the Muslim country of Southeast Asia.

But, all it took was one individual and everything changed.

“I think it was when I met Fella, a Southeast Asian girl that I really connected with, that I was like, OK, these are real people and I can really connect with them. It’s gonna be OK, the Lord is with me,” said Bertels.

Bertels’ first trip was in 2015 and she and Davey continue going back each year.

In addition to the yearly trips are ongoing relationships with the friends they met in Southeast Asia.

Bertels tells of the girl she met on her first trip, Fella.

“The past two times I have been there, the first time is the time I met her and then I reconnected with her the next summer and we usually talk with her all year round. She just texted me today and sent me a Snapchat of her baby niece. She invited me to her brother’s wedding. I’m a big part of her life,” said Bertels.

“When she was applying for scholarships, which is like a really big deal to her, she would keep me updated and even ask for prayer,” said Bertels.

“She considers me a friend, she said these are not some foreigners that just travel around with us, these are our friends,” said Bertels, “She really looks after me while I’m there and she is so excited for me and Caleb to get married. She loves us.”

Davey also has similar experiences with ongoing friendships after the trip.

“From my first trip I met this group of guys,” said Davey. “Basically it’s like a group of four or five guys who are really good friends in Indonesia who brought me into their group and loved me hanging out with them and me sharing stories with them. They would welcome me telling Bible stories. I am in regular contact with one of them, like I just talked to him on the phone for 20 minutes last week, but then the rest of them I always tell them when I am coming and they always bring me a gift. They are so happy to see me and we will go out to eat and it has been like that every year I have gone back and that’s been four years now.”

None of these friends have yet come to faith in Christ but as Davey and Bertels continue to invest in their everyday lives from the U.S. and when they travel to Southeast Asia they are able to hear about Jesus and see a picture of what lives changed by the gospel look like.

Just as Davey and Bertels shared, the story for them does not end in Southeast Asia. It spans over the border even when they return home, through prayer and ongoing relationships where they pray for the gospel to do a work in the hearts of the people they have grown to love.