Why Iranians are Protesting

Written by Sarah McGowan on November 16, 2022. Posted in Opinion, Updates

The death of Mahsa Amini in September 2022 sparked worldwide protests in support of Iranian women’s rights and protestors’ rights, as well as global condemnation of Iran’s actions against its citizens. 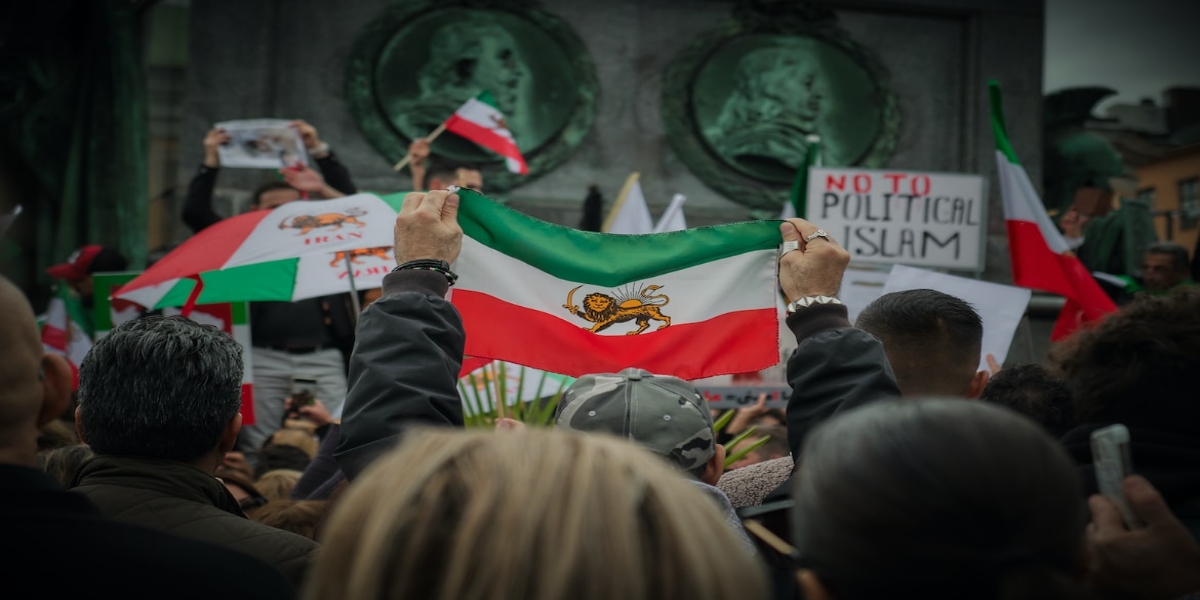 Protests, such as this one in Stockholm, Sweden, have been held worldwide recently in solidarity with Iranians who are protesting against their national government. Photo courtesy of Artin Bakhan

The recent death of a young Iranian woman in police custody has caused the eruption of protests across Iran, as well as worldwide criticism of the Iranian government’s response to the unrest.

After her arrest, Amini collapsed at a police station and died three days later.

Arresting Amini for the dress code violation was excessive, and the morality police should have instead asked her to simply adjust her hijab to comply with the laws.

Iranian authorities stated she died due to “sudden heart failure,” but her family said she had been in good health, and blamed her death on police mistreatment, according to BBC News.

In the days and weeks following Amini’s death, protests broke out across Iran and the world, including London, New York, Paris, Rome and Sydney, using “Women, Life, Liberty” as their slogan, according to The Guardian.

AP News also stated: “Many Iranians, particularly the young, have come to see Amini’s death as part of the Islamic Republic’s heavy-handed policing of dissent and the morality police’s increasingly violent treatment of young women.”

Although the morality police, which is formally known as the Guidance Patrol, is supposed to enforce the country’s dress code laws for both men and women, in reality the force primarily targets women.

The guidelines, which were created after the 1979 Islamic Revolution, do not specify what is considered “modest” and “immodest” clothing in the country, so citizens’ clothing is largely judged by the morality police officers’ personal interpretations.

People detained by the morality police may be taken to detention centers to be given lectures on hijabs and Islamic values, and after the lectures they must call someone to bring them clothing that meets the dress code regulations in order to be released.

While in custody, detainees may also be subject to physical abuse by their detainers. Many protestors see Amini’s death as the latest symbol of oppression and violence against women in Iran, and some are calling for the dismantling of the morality police.

Those who are calling for the morality police to be dismantled or heavily reformed are correct, due to the violence and oppression the force brings against women. Citizens should not be physically punished for breaking dress code laws. Additionally, in order to enforce dress code laws, there should be specific guidelines to be followed and enforced. Laws should not be left open for subjective interpretations.

All people in Iran, including visitors, must comply with the laws, regardless of their own beliefs. While it is customary for visitors to follow a country’s laws, it is unethical for a government to impose the regulations of a specific religion on people who do not practice that religion. 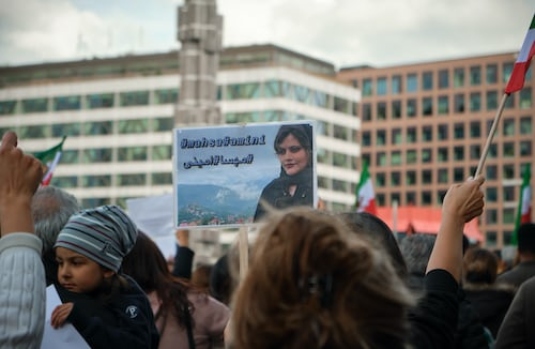 Protestors across Iran and the world see Mahsa Amini as the latest symbol of Iranian oppression and violence against women. Photo courtesy of Artin Bakhan

Men are favored over women in domestic violence, divorce and child custody court cases, and women commonly face workplace and hiring discrimination. Additionally, women are banned from entering some fields of study and many public places such as men’s sporting events and stadiums.

This discriminatory legislation against women is clearly unjust. Everyone should be given equal rights and opportunities under government law. 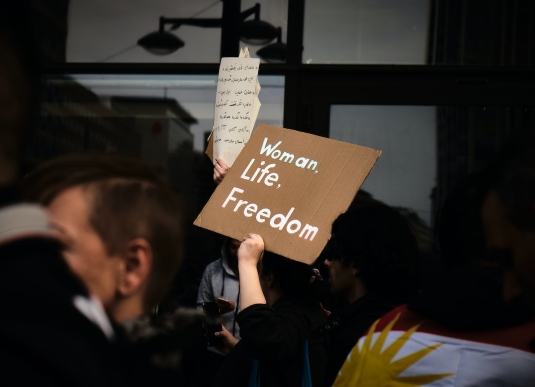 Demonstrations in Stockholm, Sweden, are part of protests across the world calling for an end to the oppression and violence that women in Iran face. Photo courtesy of Artin Bakhan

The government’s response to the protests has been violent. CBS News reported on Nov. 8 that the death toll from the protests has topped 300, including 41 children and 24 women. Over 1,000 people have also been arrested in connection with protests, including several journalists.

Journalists and other members of the press should not be arrested for doing their job, and should be able to freely report news without fear of punishment.

Iran Human Rights, a Norway-based organization, accused the authorities of using excessive force, including live ammunition, against protestors, which is an international crime. The European Union and the U.S. have placed sanctions against Iran for its treatment of protestors, and the United Nations Human Rights Office also called for an end to the violence against peaceful protestors, demanding accountability for Amini’s death.

Those who caused Amini’s death should be held accountable, as well as those who have brought death or harm to protestors. Countries should police each other in matters of human rights, and it is justifiable for other countries to condemn the Iranian government for its mistreatment of its citizens.

Iranians should have a right to protest peacefully, and Iranian women should be granted the same freedoms and rights as men. All people should be able to make decisions for themselves, such as clothing, nutrition, family structure and home life, public places they visit and the fields of study they choose to enter.

Practicing Muslims, along with people of other religious identities, should be able to make these decisions based on their own faith and beliefs rather than government regulations.

Countries around the world should continue to hold or place additional sanctions against Iran, due to its ongoing mistreatment of its citizens, such as imposing visa and travel bans and freezing assets of Iranian authorities.

Countries could also ban exported goods to Iran or imports from Iran, including banning or greatly reducing the amount of oil they buy from Iran. This will contribute to the erosion of Iran’s economy and place added pressure on Iranian officials to end the violence against protestors.

Individuals can show support by raising awareness of the issues Iranians are facing, especially since the Iranian government has censored social media platforms in the country, therefore Iranians cannot freely voice opinions in support of the protests. If enough people around the world work together, we can enact change in Iran.

Sarah McGowan is a staff journalist for MBU Timeline. She is a communications studies major from O’Fallon, Missouri, and a member of MBU’s Literature Club.