Written by Alexa Tippett on December 4, 2022. Posted in Opinion

Vacation Bible School is a week-long summer program that allows children of all backgrounds to have the opportunity to gather together, have fun, and learn about Jesus. Though the concept sounds like something that would mainly have influence over children, being involved in the program presents a unique opportunity for all ages to grow their faiths and be encouraged by one another. 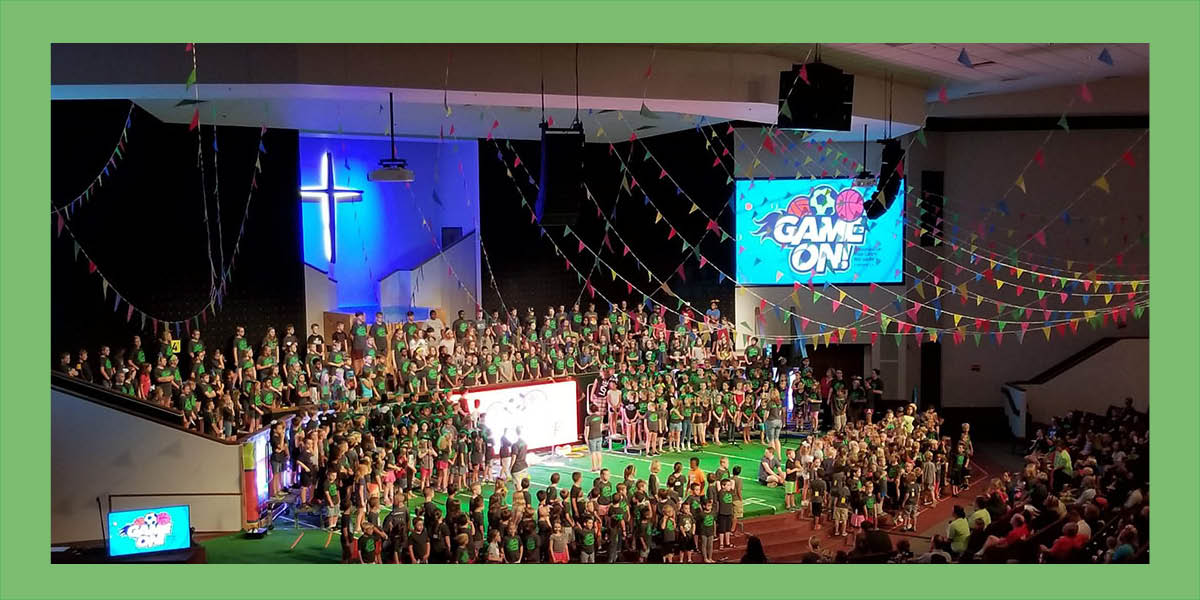 One of the exciting aspects of VBS week is the end-of-the-week showcase in which the kids are able to perform the choreographed dances that they learned in music class throughout the week. In 2019, the theme of the year was sports, which allowed the children to create a performance in which they simulated the crowd of a sporting event. Photo by Alexa Tippett

Vacation Bible School has been a large part of my life for as long as I can remember. As a child, it added to the foundation of my faith, but as an adult, it grew my faith and changed my perspective.

One week, every summer for a decade of my life, I woke up early, pulled on a mildly hideous themed T-shirt and sluggishly made my way to my childhood church where a multitude of hyper children and patient adults began packing into the pews. 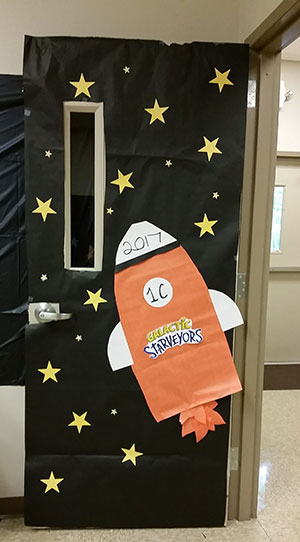 Because a lot of the teachers and student helpers returned each year, the door decoration competition became a recurring and exciting aspect of VBS week. During the space-themed VBS program, we decorated our door as pictured above and allowed each student to sign the rocket at the end of the week. Photo by Alexa Tippett

I remember being amazed by the different yearly themes, the decorations, the music and the tangible enthusiasm that echoed through the church building as we gathered in the early morning.

The music would hum to life under the deafening sounds of children’s excited voices, causing a hush to fall over the crowd as we began vehemently attempting to remember all the words and choreographed dance moves to the set of songs our teachers had taught us throughout the week.

Vacation Bible School is an annual week-long experience in which children in first through sixth grades are invited to come to the church, have fun and learn about the Bible.

The process at my church would begin with everyone gathering together in the sanctuary for morning worship, after which we would be dismissed into our rotation of activities, which consisted of the following: Bible lessons in our small group, arts and crafts, music, missions, recreation, then back to our small group room to wrap up the Bible lesson and have a snack.

To anyone who has not experienced the intricate ordeal that is a church’s Vacation Bible School week, it would probably sound strange, possibly even ridiculous. But as I grew older and transitioned from VBS attendee to VBS volunteer, I realized that being able to gather together, fellowship with the children and share something I am passionate about actually eliminated all the uncertainty and shyness I usually felt.

As a kid, VBS was a way to spend time with friends during the summer, but as I grew older, it became clear there were so many benefits to volunteering my time and participating in my church’s week-long rendition summer Bible school program that I had not realized before.

From first through sixth grade, I attended VBS every year because my mom always volunteered to help out at the church in any way she could. She bargained that we were going to be up early and at the church anyway, so why not spend time with my friends and have fun?

Obviously, her bargaining worked because I attended VBS for as long as I was able to. And when I was no longer of the age to attend, I decided to begin volunteering.

The transition from being an attendee of VBS to being given the highly esteemed and deeply impressive title of “student helper” was taken with extreme pride and an abundance of caution, as I was not really sure what being a student helper entailed.

In my first year, I was a student helper for one of my very favorite elementary school teachers who graciously allowed me to aid her in the preparation process the week before VBS. Not yet being able to drive, I was dropped off at the church building where she met me at the door, led me to the Sunday School classroom that we had been assigned and encouraged me to decorate in any way I saw fit. The unbridled joy of creating colorful construction paper animals, spaceships and forests built my anticipation for the upcoming week.

The decoration process would commence a serious and incredibly competitive drive in me to create the most genuinely mind-blowing themed VBS classroom that any first-grader had ever seen. Though bound by some strict church-enforced decorating rules, my friends and I gleefully attempted to achieve a creative and welcoming atmosphere that transported the kids directly to the theme of the year.

Our endless construction paper creations, dollar-store tablecloth wallpaper attempts and rolls upon rolls of multicolored paper streamers were used to achieve one thing: piquing the kids’ interest, causing them to want to come back.

Once the room was sufficiently decorated, I was inducted into the process of “student helping.” I was given a rundown on all of the most important aspects of being a student helper. I memorized all of the memory verses, read through the lesson plans, made copies of worksheets, cut out tiny, colorful name tags for each student and made approximately a thousand trips to the church lounge to stock up on water bottles for the classroom.

After a week of preparations, we were ready to welcome a whole class of first-graders. Or, at least, I thought we were.

Within the first day, I witnessed tears, sweat, vomit and shoes used as weapons against fellow first-graders. I was so confused as to how this experience could be so different than what I had come to know as VBS week.

Slightly dejected, I donned my arguably atrocious themed shirt and returned to the church the next day. The week proved to be incredibly trying for not only my patience but also my faith. I was fairly young, my faith still innocent and not well-developed, so my enthusiasm to share the joy of the Lord was abundant, yet I was not entirely sure how to go about doing it.

I learned, very quickly, that volunteering in a church will leave you with an abundance of two things: snacks and advice. The leaders around me poured into me an unspeakable amount of wisdom. They would sit me down, hand me a packet of graham crackers and a Dixie cup of apple juice, and explain to me the importance of sharing the Gospel with the kids around me. 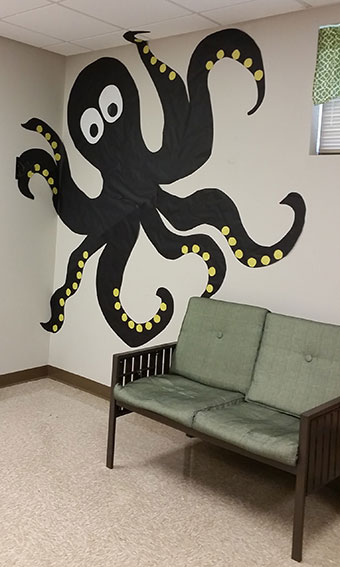 As decorating the classroom was a serious passion of mine, the ocean-themed VBS program brought a litany of various craft supply sea creatures. Pictured above is an octopus that my friends and I painstakingly created with many sheets of construction paper. Our gaggle of first-grade students lovingly dubbed him “Waddlesworth the octopus.” Photo by Alexa Tippett

I specifically remember the primary leader over the first-grade division of classes, Ms. Kim, standing with me in the church lounge and sharing wisdom that I have never forgotten.

“You have to understand that some of these kids are dropped off here because their parents need someone to watch them. They have never heard about how Jesus loves them or how He died for them, and they may not ever have the opportunity to hear about it again,” Ms. Kim said in a gentle, yet firm tone of voice that spoke directly to my heart. “We have one week to not only tell them about the love of Jesus but to show them.”

This idea changed my perspective completely. From then on I realized the difference between some of these kids being able to come to terms with their faith or not being able to could be something that I influenced. It became a responsibility I took a lot of pride in and put a lot of careful consideration into. I accepted the idea that this was not just about helping a group of kids have fun, but instead, was about having the privilege of teaching them about salvation.

My years of volunteering at VBS brought me to realize there is genuinely nothing more gratifying than having a young child who has diligently listened to you teach them about Jesus for a week, look at you with complete trust and innocence, and ask you to pray with them to accept Jesus into their heart.

While attending Vacation Bible School as a child helped develop the foundational aspects of my faith, volunteering for VBS as a young adult made me realize how impactful acts of service could be. Living out my faith through the process of sharing my beliefs with others shaped the way I perceive faith.

VBS may seem childish, trivial and unimportant to some, but in my experience I see it as a way to connect with others and show them the love of Christ. This is a privilege I do not take lightly as I have realized that as much as I am able to influence the kids each summer, they influence me just as much.

Alexa Tippett is a staff journalist for MBU Timeline. She is majoring in communications and English. She was born and raised in O’Fallon, Illinois. Alexa enjoys reading and writing, as well as trying and failing to perfect a plethora of recipes, much to her family’s dismay.