A Simple Message that Changed My Life

Written by Emily Morton on March 3, 2018. Posted in Opinion

A trip to a small village in Ecuador radically changed my view of God, the gospel and our mission to share the news of Jesus with the world. 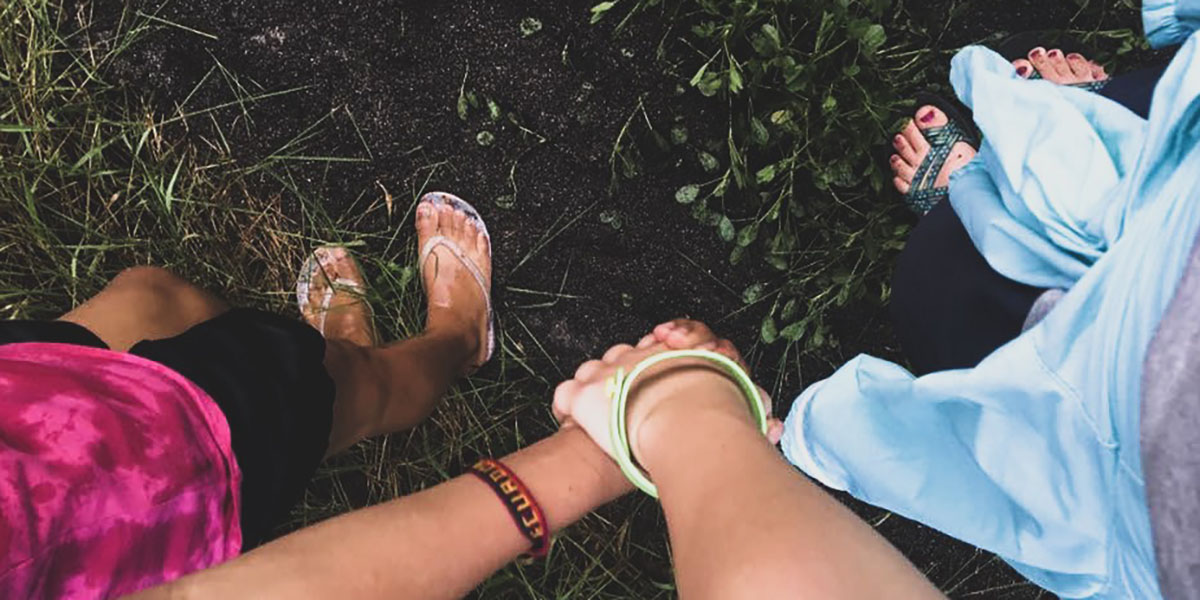 In the middle of the Amazon rainforest, in a village named Santana, I watched as a man kneeled down and began to speak to a little brown-eyed Ecuadorian girl as a translator put his words into ones she could understand.

The words spoken were the gospel but put so simply that a child could fully understand the truth behind the message.

I stood watching and holding back tears as I was reminded of the simple message of what Christ did for me, for the little girl standing in front of me and for the whole world.

Looking back at this moment it has put global missions into perspective for me and has reminded me just why we go.

As we move toward Spring Break 2018 I reflect back on last year around this time, when my Spring Break was supposed to look much different than going to the Amazon rainforest. For months before I had been planning a trip to Nashville with a group of friends.

The Airbnb was booked. The coffee shops we would visit were picked out. We were anxiously awaiting the trip.

However, God had different plans for my Spring Break.

Just a month and a half before, I was sitting in a meeting at Matthias’ Lot Church in St. Charles when a girl came to the front and began speaking about how God called her to go on the trip to Ecuador.

She, like me, had a vacation trip already booked but felt God changing her plans and using the break to serve and share the gospel instead.

I sat in my chair feeling as if she was calling me out. I knew about Ecuador and had stifled the feeling that I should go for a couple weeks.

I told myself I already had plans and tried to push the idea to the back of my mind. But here I was, in a meeting that I almost skipped, being called to Ecuador.

So I said yes to God and signed up to go.

I knew God was calling me there but in the month of preparation I struggled as to exactly why.

I did not feel prepared, deserving or many times even very excited to go. I was scared of the unknown and torn between what I wanted and what God wanted me to do.

However, in that moment, in the humid heat of the Ecuadorian jungle, as I watched the gospel being unfolded in beautiful simplicity to this little girl, the fear began to wash away.

I realized God had called me here because these children were broken and needed to hear the simple gospel message that would change their hearts forever. The same simple message that changed my heart.

This experience was all I needed and I knew that I would never return to the U.S. the same.

But, the next day I was given the most beautiful gift that further drove home what God was already teaching me about the gospel.

This gift came in an 11-year-old Ecuadorian girl named Cisa, who stood in line at a school waiting to receive a Polaroid picture of herself.

I was at the school serving with my team by helping take pictures of the children, one a Polaroid the child would keep and the other a digital copy that would be brought back to Matthias’ Lot church and shown to church members to put a face with the children they are praying for.

During this time we were also given the opportunity to speak with and pray for the kids at the school.

We had not been there long when I made eye contact with Cisa. She had joyful brown eyes despite muddy clothes and old shoes that showed the poverty she lived in daily.

Her smile showed hope and childlike innocence that stood in contrast with the spiritual brokenness of the village she called home.

I walked over to her and asked her name and then took a folded piece of paper out of my pocket.

That morning, on that folded piece of paper, I wrote down in Spanish the wonderfully simplified story of the gospel of Jesus Christ.

I read those words to Cisa and prayed the simple message would overwhelm her heart and change her life forever. 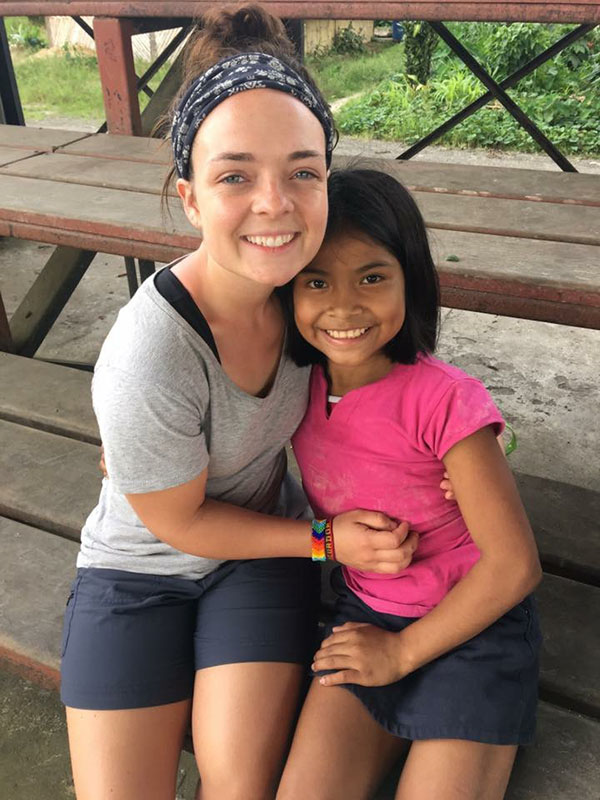 This moment sparked a friendship for Cisa and me and there was rarely a moment the rest of the day that she was not by my side.

This friendship was a beautiful gift from God and when it came time for her to go home that night my heart broke as I watched her walk away.

My heart broke for the situation she would return to, a world filled with broken homes, alcoholism, abuse and pain.

I so desperately wanted to stay and somehow provide change for this beautiful little girl.

But, I knew I couldn’t. I could not stay nor could I provide the change her heart needed.

In that moment my mind went back to the first day in the jungle and to the moment I witnessed the gospel being shared to another little girl, so simply.

I was overwhelmed by the power of the message of Jesus and I knew this message was the only thing that could provide the change Cisa truly needed.

I knew God had brought me here to share the good news of his son, not to single-handedly change the village of Santana.

Only God could change Santana and all I could do was pray the news of Jesus would change hearts and lives.

As I returned to the U.S. the truths I learned about the simplicity and power of the gospel returned home with me.

I came home with a deeper understanding of who God is and how much he loves, shown in the story of his Son.

I also came home with a faith that the simple message shared with a little girl and written on a folded piece of paper would change hearts in Santana long after we boarded the plane home.

A trip to a small village in Ecuador radically changed my view of God, the gospel and our mission to share the news of Jesus with the world.

Photos by Emily Morton and other missionaries with Matthias’ Lot Church in St. Charles 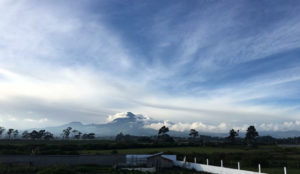 View from Lasso of clouds sweeping around a volcano named Cotapoxi at sunset. 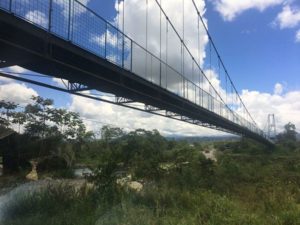 A suspension bridge stretches across the Amazon River in Santana. 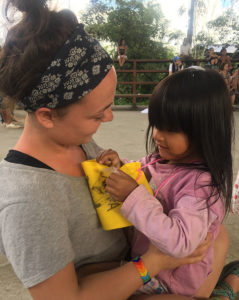 Emily Morton holds a child in Santa Ana at the children’s program put on by Matthias’ Lot Church. 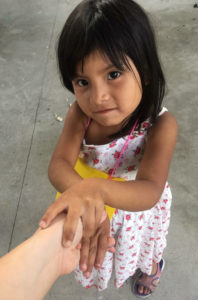 The faces of Ecuadorian children say so much. 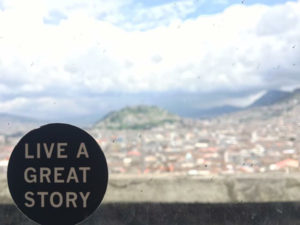 A sticker on a cathedral window overlooking a mountainside view of Quito, Ecuador, says it all. 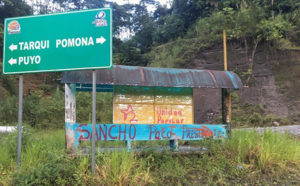 A bus stop on the way to Santana, Ecuador, no longer in use. 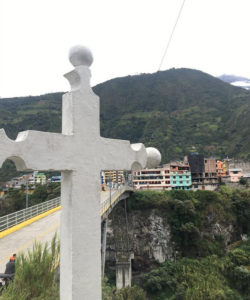 A cross overlooks the mountainside village of Baños. 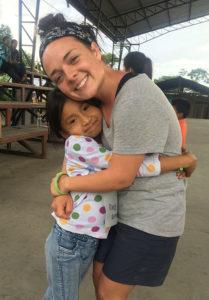 Morton hugs a child in Santana. The children attended a program where the emphasis was put on God loving them and knowing their name. 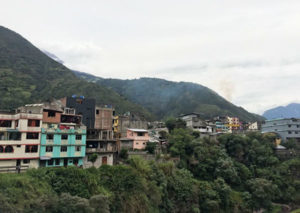 View of a hillside in Ecuador from the bus on the way to Banos, Ecuador. 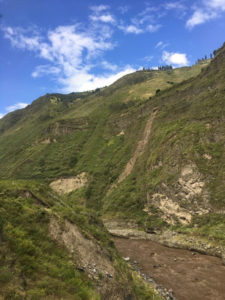 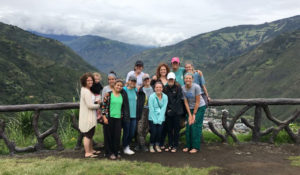 The girls from the Matthias’ Lot Ecuador team at a town in Ecuador after zip lining across a valley. Bonds built in Ecuador were strong. 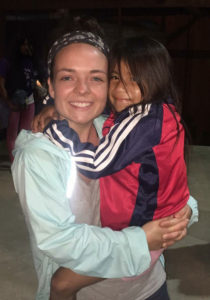 Morton holds a child at a worship night held in the jungle of Santana. 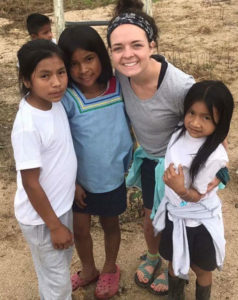 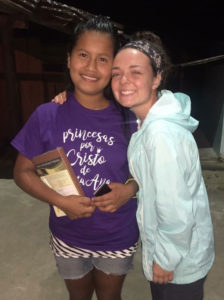 Morton with Maria, a member of the Princesas por Cristo de Santa Ana, a ministry for young girls in Santa Ana. 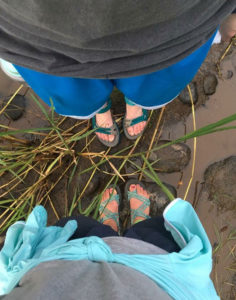 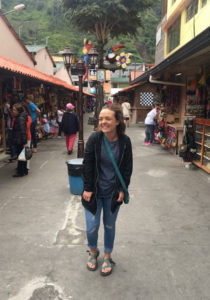 Morton enjoys a day at the market in Baños. 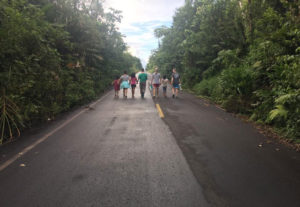 Morton, team members and Ecuadorian children walking in Santana to see the baptism of a fellow team member in the Amazon River. Morton and other missionaries left Ecuador with memories that will last forever.