Two candidates, a couple hundred electors, a couple presidential debates, and one that gets to call himself president for the next four years.

In total, that is how democracy is constructed in the United States. Politics for dummies, if you will.

Not so in Deutschland.

Germany would not be Germany if it did not make politics so very complicated that the average Joe can hardly understand.

Hence, now the dummies version: The German equivalent for the presidential elections in the USA is called the “Bundestag election.”

They typically choose between two candidates, a Democrat and a Republican.

So, even people with major difficulties in decision making have no problems making a choice: red or blue pill?

The Germans, on the other hand, like to confuse their people.

Citizens have no direct influence on the election of the highest office in the country, which is the “Bundeskanzler,” translating to “chancellor” in English, which is comparable to the American president.

The candidate with the most votes in the district receives a “direct mandate” and thus a seat in the “Bundestag” in Berlin, which is similar to the U.S. House of Representatives.

All direct mandates from every district then fill 299 of the 598 seats.

The second vote decides the percentile representation of the party in the “Bundestag.”

More votes equal more seats for that particular party. Complicated enough? No? That’s not all.

Angela Merkel, Germany’s chancellor for 16 years, is considered the most powerful woman in the world. You’d think she’s the German Donald Trump, governing as the whim takes her. 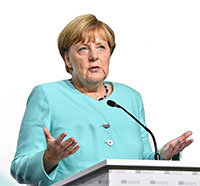 German Chancellor Angela Merkel has served in her position since 2005.     Photo courtesy of Pixabay

However, Merkel may not have been given the word that she is known to be the most powerful woman on Earth.

In Germany, she de facto is only third in the order of rank lining up behind the federal president and the Bundestag-president.

Yet, legally she holds the most powerful office in the country. That makes things a little more complicated, yes?

The main decision-making power in the country, however, lies with the federal government, which is elected by the people.

The government constitutes one or more parties that represent at least 51% of the nation.

In most cases, the party with the most votes does not achieve an absolute majority of at least 51%.

In this case, they join forces with one or more parties to form a majority.

Only then they are entitled to rule.

The other 49% is represented by the opposition, which also has a set of governing rules.

By all means, though, that would get too complicated to explain.

Everything seems very typically German: Unnecessarily complicated and far too many rules. But there is a reason Germans are known for abiding by the rules.

The political system they implemented is a great example of how to democratically serve as many people as possible. 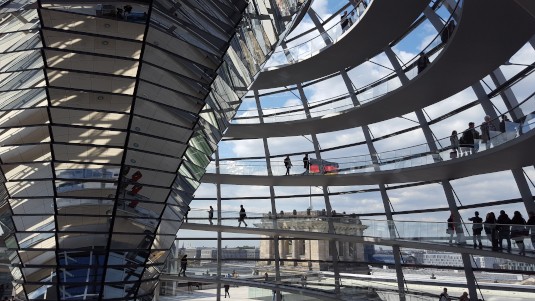 An interior view of the iconic glass dome that sits atop the Bundestag, symbolizing the reunification of Germany and a movement toward democracy.     Photo courtesy of Pixabay

The U.S. is the contrary. Candidates can become president even when representing the lower number of voters across the country because electors hold the ultimate power.

Far more important, however, is that Germany’s system prevents politically incapable individuals from gaining power over millions of folks because the politically relevant positions are distributed to and voted by other politicians, not the people.

In 2016 the American people didn’t have the creme de la creme of candidates to choose from in terms of political abilities and just general intelligence.

They still were forced to choose one of those two evils.

Far worse is yet to expect in the future, though, as we’ve heard Kanye West will be running for office in 2024.

Potentially the first time we will see a president being inaugurated in a pair of Yeezy sneakers and an oversize sweater.

And in 2032 maybe Siri will be the world’s most powerful … THING?

Watching Angela Merkel managing the country for 16 years isn’t exactly varying politics, but it is a stable development.

However, ever since Merkel took over, Germany has been growing its economy constantly.

A new president every four to eight years, with new visions and ideas, doesn’t contribute to the consistency of a nation.

We have seen this development very well in Trump’s presidency, in which his priority was to rewind all the work Barack Obama had done before, in regards to Obamacare.

Politics is a challenging field.

Individuals have to disregard their own beliefs and act in the will of the people. Germany has developed a consistent political system that gained the trust of many German citizens.

This process, however, takes years or decades.

The political system in the U.S., on the other hand, takes pleasure in frequent changes. Instead, the goal should shift toward aiming for a universal goal that the nation as a whole works toward.

And no matter who runs for office every four years, those universal goals should always be holy to any politician to ensure they will be realized and not challenged.