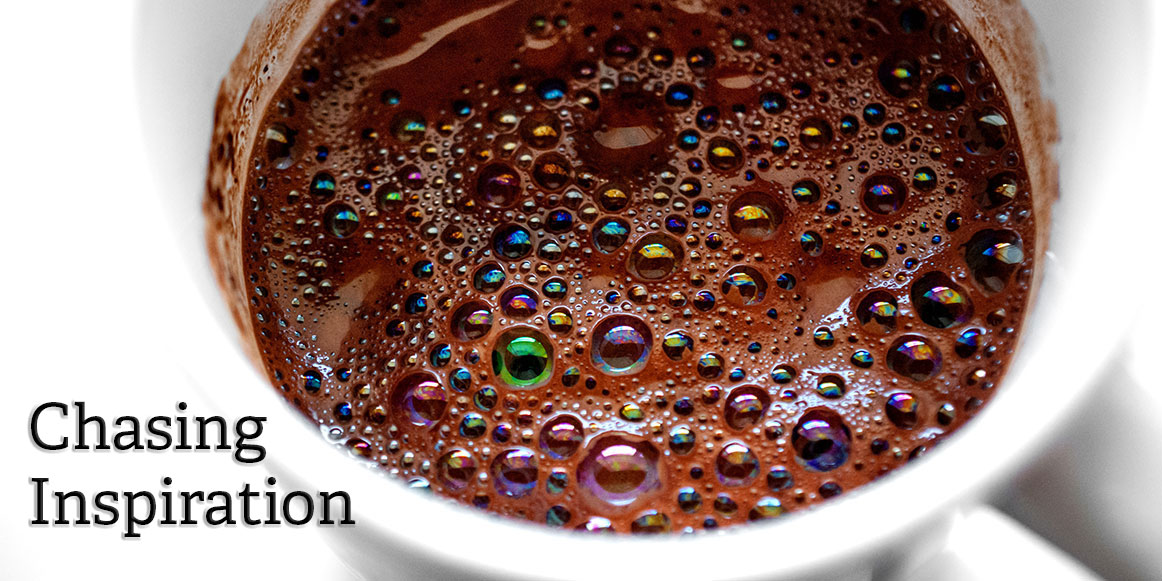 I think it’s a common occurrence for creatives to, at one point or another, adopt a state of mind that they should be (or even could be) beautifully inspired all the time.

I’m guilty of this myself.

I can’t even count how many times I’ve sat down at my desk, closed the door and told myself that I would “focus” until I came up with X number of usable ideas.

Staring at a blank notebook page or a blinking, unforgiving cursor on my laptop, I will inspiration to strike.

I was being so industrious looking for it after all.

But so often inspiration is elusive, seemingly divined by random from the creative void.

That begs the question then, if we don’t know where inspiration comes from, why are we always chasing it?

The greatest sources of inspiration are rarely found by deliberately searching for them.

No, inspiration more often than not comes unexpectedly out of states of boredom and absentmindedness.

Try to think of the best idea you’ve ever had. Now, try to remember where you were when you got that idea.

Maybe it was the atmosphere with kids laughing and ducks swimming around a pond at your local park one sunny day that inspired you to write a children’s book.

Maybe you were at the grocery store and the colorful icing on the cupcakes inspired you on a color scheme for your living room.

No matter where you get your ideas, they likely come from scenarios like this.

They’re scenarios where you aren’t actively looking for ideas, but once you notice them they become obvious.

Some of the greatest works and ideas came from regular days like these and from garden variety boredom.

For example, Suzanne Collins, author of “The Hunger Games” trilogy, has said she was inspired to write the story after flipping back and forth between TV channels.

One station was showing war footage and the other was a reality TV show.

The odd juxtaposition of violence and frivolous competition inspired her, and the concept for Katniss and her world was born.

Also coming to mind is the legend of Isaac Newton sitting under a tree when an apple falls on his head, inspiring the theory of gravity.

Newton was essentially taking a nap, surely he was bored too.

Though I’m no scientific theorist, or young adult literature mogul, I find my own inspiration arriving in much the same way.

Last semester I was desperately trying to come up with a fun topic for my speech class.

There I was, staring at that unforgiving laptop again, willing my brain to provide just one precious idea for me to use.

Then all of a sudden, my friend Cylee burst into my room with angel food cake and blueberries of all things, and we got to talking and joking around.

Before I knew it inspiration had struck, and I had come up with several usable topics to work with.

My friend’s sudden arrival had provided just the right amount of distraction to let my mind entertain new concepts for my speech that I wouldn’t have thought of before.

It’s always tempting to pursue inspiration aggressively, but I’ll tell you this: don’t chase your inspiration.

Simply welcome it when it decides to grace you with its presence.