Written by MBU Timeline on October 21, 2016. Posted in Opinion

As both candidates for president faced off one final time before the Nov. 8 election, we hoped for civil discourse and discussion of policy. And we got that — for about 20 minutes — before the childish banter returned to the same old accusations we’ve heard for the better part of a year now. Our MBU Timeline bloggers write about these “Faulty Arguments” that are too often being sold — or attempted to be sold — as truth to an electorate that needs to be informed like never before. 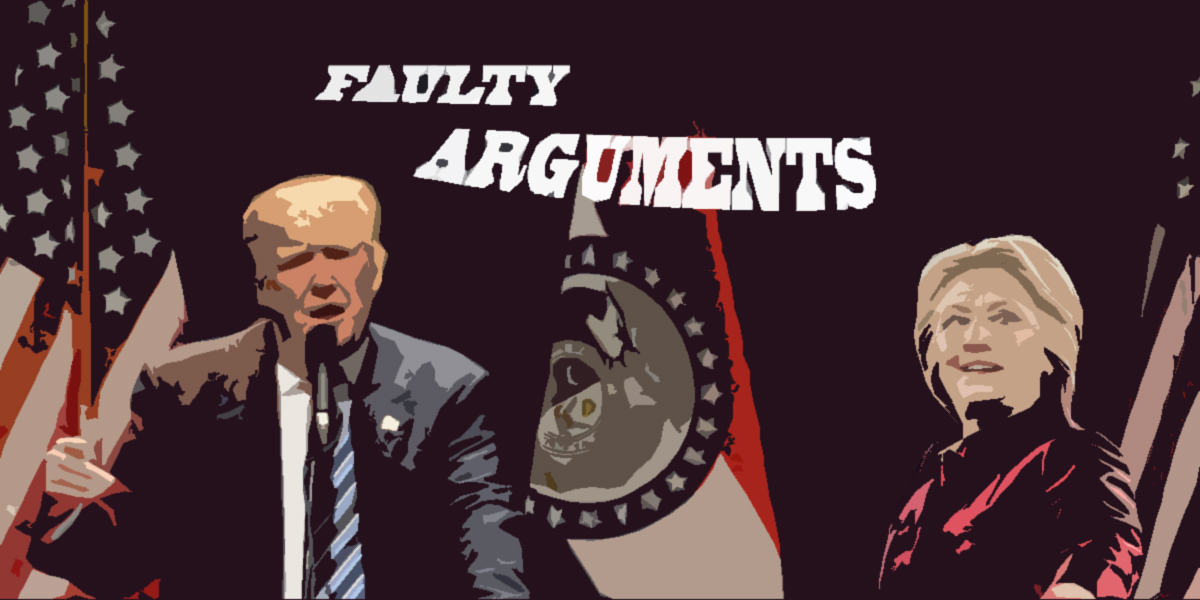 They are on athletic scholarships which means they must attend early morning weight training, afternoon practice and weekend games.

On top of their already-booked schedules, add a minimum of 12 credit hours and the immeasurable number of quizzes, tests and papers.

The common and dreaded interview question, “What do you do in your free time?” is not only unanswerable, but also condescending.

If you answer, “I don’t have free time,” everyone knows that’s not true.

If you answer with any of the above, however, you will likely be judged as reckless with your free time.

Connecting this with college debt, how much stress would be alleviated if college was free.

Nothing in life is free.

If the federal government assumes all student loan debt, the debt will be paid by the taxpayer.

Someone will be paying for college.

It’s basic logic, but if someone is paying for something, it is not free.

“You must pay for everything in this world one way and another. There is nothing free except the grace of God. You cannot earn that or deserve it,” said author Charles Portis.

Fallacies fly during everyday conversations, but we must pay close attention to the fallacies that come from the presidential candidates.

Neither candidate fits the stereotypical president column. Spend a few minutes on any social media platform and you will see the nation’s embarrassment of these candidates.

Wake up, America. You picked them. They are here because of your decisions. Are you happy now? Are you excited to see the center of every “Saturday Night Live” skit as the leader of our country?

The land of the free and home of the brave? We will see where America stands on that in the next four years.

In this Unusual Presidential Election, Pick Your Poison

With all of the negativity surrounding this year’s election in the media, it has been difficult deciding who is right for the job. Whether it’s faulty arguments, deleted emails, or failure to pay taxes, it leaves me wondering if I’m voting for a capable president or the lesser of two evils.

I have never been overly intrigued by politics.

As a matter of fact, I have never really followed an election until this year and that is only because the media is throwing it upon me.

In years past, I did not feel the need to worry about the presidential election.

I was just a naive 19-year-old man when Obama was elected for his second term and I did not feel like the results affected me at the time.

But this year something is different.

I am genuinely concerned and worried about this year’s election.

I am not confident in either Clinton or Trump’s ability to lead a nation.

Both parties have a high public image and both have been successful in life, but how honest were they in achieving this public image?

In my eyes, we are voting between a pathological liar and a potential racist.

How can we be confident in voting for the leader of our country when they have both notably changed their views on important issues since starting their campaigns.

Hillary wants to promise debt-free college for all Americans, a promise that seems impossible.

She also has recently been under investigation from the FBI regarding her deleted emails.

Guilty of the crime or not, do we really want someone so careless leading our nation?

Trump lied over and over again during the last presidential debate, an estimated 34 times according to fortune.com.

So, which party is the lesser of two evils?

It is my duty as a Christian and an American to vote.

I am just looking for some answers and guidance before November.

“The gun industry is … the only business in America that is wholly protected from any kind of liability,” said Hillary Clinton, the Democratic candidate for president.

After reading this quote I thought it sounded a little fishy, there is no way that the gun industry is wholly protected.

According to Google definition, “Wholly” means entirely or fully.

Clinton strongly believes those who sell guns can get away with selling guns to whoever without any sort of consequences.

But people who sell guns illegally or to criminals do get charged; I have seen these issues on the news before.

Lauren Carroll, who is a writer for Politifact, thinks differently than Clinton and takes an angle I can agree with.

“The gun industry is susceptible to some lawsuits and there are federal laws restricting liability for a number of other types of businesses,”said Carroll.

There is the Protection of Lawful Commerce in Arms Act, that was signed by previous President George W. Bush.

The main purpose of this act was “to protect gun dealers and manufacturers from lawsuits when their products are misused,” said Carroll.

But there are still liability issues: “It does not protect gun dealers who transfer a gun knowing it would be used for criminal purposes, nor those who knowingly break state law if the violation results in harm,” said Carroll. “Gun manufacturers can also be sued if the gun, when used properly, causes injury because the product is defective.”

The gun industry is not wholly protected from any kind of liability, Clinton is stating wholly false information on gun protection and laws.

After digging for more information on Clinton’s false accusations and assumptions, it has made me not favor her for president.