Written by Holly Flieg on October 19, 2015. Posted in Opinion

MBU Timeline staff member Holly Flieg shares her journey though a harsh diagnosis. She explains the struggles she went through and how she overcame them. 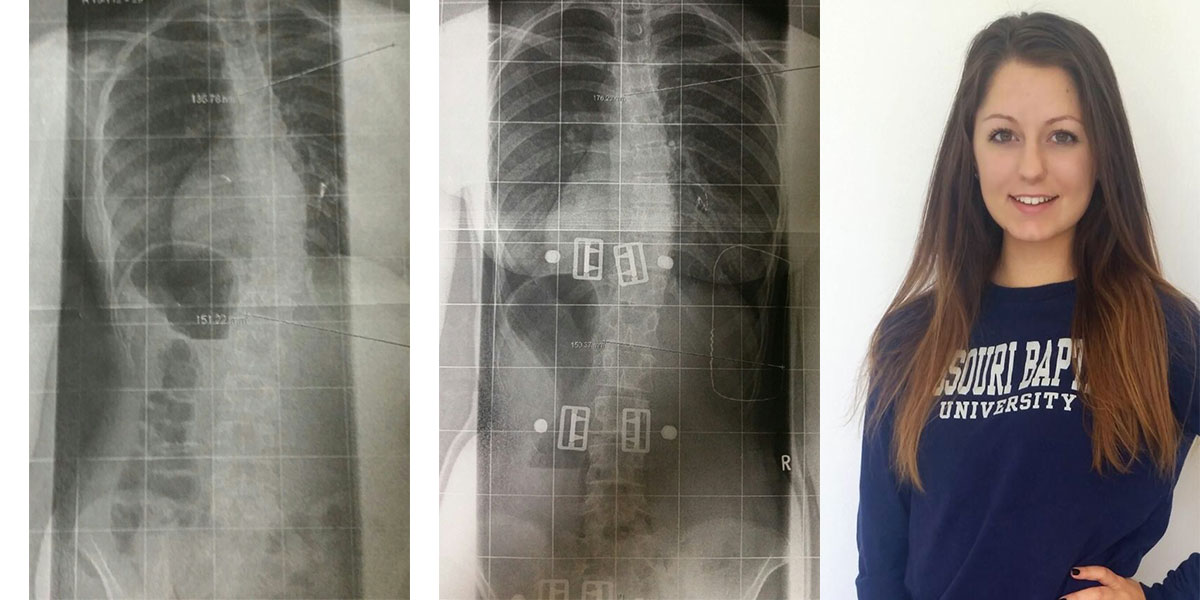 As if the transition from middle school to high school wasn’t enough to stress about in 2008, I received news that I never saw coming, news that would have a huge impact on how I lived my life for the next couple years.

I was diagnosed with moderate scoliosis, a lateral curvature of the spine.

I was in the seventh grade when my school had a routine checkup for everyone in my class to get their backs examined during P.E.

After the nurse looked at my spine and I went home from school, my mom told me she got a phone call regarding the checkup and I needed to see a doctor to get an X-ray.

I never thought that I would have scoliosis. It never crossed my mind, and I wasn’t aware that it was a common condition in my family.

The X-ray showed a curve of 38 degrees and I was sent to a scoliosis specialist at Cardinal Glennon Hospital to see what the next step would be.

I knew my options would be either a brace or surgery and I didn’t like either of them.

I was terrified and heartbroken when I was told I had to wear a back brace, even more so when I found out that I had to wear it 23 hours a day; only taking it off to shower.

The brace kept my torso straight so I was unable to bend or twist my body while wearing it.

It was like a plastic corset that made simple tasks more difficult than they should have been, like making my bed, participating in gym class, putting on a seatbelt, and even eating or sleeping.

I returned to Cardinal Glennon every six months to check my progress and to make adjustments to the brace as I continued to grow.

Each time I went back I hoped to hear that I wouldn’t have to return.

The brace was hot, uncomfortable and not the best accessory for a girl who already had glasses and braces.

The constant pressure of plastic against my skin left me with bruises and rashes, which were just as unpleasant as it sounds.

I could go on and on about how horrible the experience was, but I am thankful we noticed the curve in time for it to be corrected and I didn’t need surgery.

I learned to live with the struggle of not being able to move my body to its full capability.

Eventually I didn’t even need help putting on the contraption, which was adjusted and strapped on from the back.

Although I still have the curve, the brace prevented it from getting worse, which is exactly what is was supposed to do.

It’s comforting to know the pain I went through was worth it and I now have a success story to share, as well as an interesting explanation as to why I have perfect posture.

The day I was told I didn’t have to wear the brace anymore, I was overjoyed knowing that I could go to bed for the first time in two years without the hard surface wrapped around my body.

I learned a lot from this experience and I believe I am a better person today because of it.

It taught me that not all conditions are visible and people have struggles that others aren’t aware of.

I was very insecure at the time I was wearing the brace and I let it prevent me from doing activities that I enjoyed.

I played volleyball for three years in middle school, but I quit because I didn’t want to change in the locker room and let the other girls know what I had underneath my thick sweaters I wore every day, even when it was hot out.

Looking back at it now, I realize that no one would have judged me for having to wear a brace and my life would have been so much easier had I decided not to keep it a secret from everyone.

People would have understood why I sat properly, walked awkwardly, and struggled to bend over to get a book from my backpack or pick up a pencil that I dropped.

If I knew then what I know now, there is so much I would have done differently, but I am thankful for the struggle because it helped shape the person I am today.