Ash What? An Explanation of the Smudge on my Forehead

Written by Jerica Marie Drago on March 5, 2014. Posted in Opinion

Most people are aware of Mardi Gras, the holiday just before Lent. Not everyone, however, is well-versed in Ash Wednesday, a holiday among Christians. 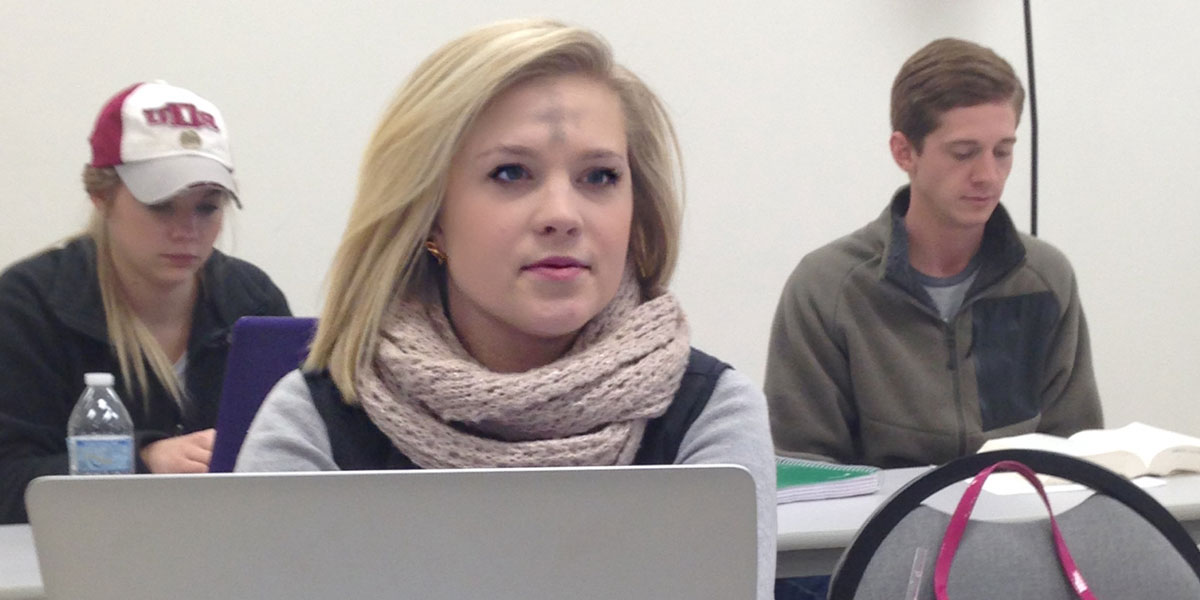 If you are anything like my genuinely sweet friend and teammate, Stacey, you probably came running to my aid trying to wipe that giant black smudge off my forehead at some point Wednesday, trying to save me from embarrassment.

But stop. Don’t wipe away my ashes! That isn’t just a smudge, it’s important. Let me explain this a bit. Lent is celebrated by Christians for 40 days, beginning with Ash Wednesday.

Lent is a time to focus on reflection, fasting, mortality and penance, all concluding during Holy Week and then Easter Sunday with the commemoration of the Resurrection.

Even though many Christians follow the season of Lent, my time at MBU has shown me how different the time of year in general is for practicing Catholics vs. some Protestant denominations.

For example, the Rev. Arne Panula, director of the Catholic Information Center in Washington, D.C., said that in his experience, “More parishioners attend church on Ash Wednesday than any other holiday, including Christmas and Easter,” but why is that?

OK, so now let’s use some well-known Catholic/Christian vocabulary you might be familiar with, along with some less familiar vernacular thrown in.

In the Catholic Church as well as with other religions, we operate our services (we call them mass, but you might call it service, or chapel) under what is called liturgy, or our order of service. This is just our customary public worship and it is dictated by our traditions and seven Catholic sacraments.

Sacraments are ceremonies created around what is sacred and significant. They are our special ways of experiencing God’s saving presence.

The seven Catholic sacraments are essential to the Catholic Church and to each individual parishioner.

They include the Baptism, the Eucharist (or communion), Reconciliation (or confession), Confirmation (the maturing of our Christian commitment), Holy Orders (essentially our governing hierarchy) and the Anointing of the Sick (Last Rites, but can be given to anyone feeling ailment physically, emotionally or spiritually).

So where does Ash Wednesday come into play with all of this?

Although it is not considered one of the seven sacraments, I know many Catholics who would be willing to say that this day has become almost equally important to them.

Like I said before, Ash Wednesday has long-remained a part of Christian doctrine, no matter which denomination. The difference is in that black smudge.

Per Catholic ritual, the entire process of receiving my black smudge starts during the season of Lent from the previous year.

Palm Sunday, as it is called, actually begins the day before on Lazarus Saturday.

Parishioners prepare palm fronds by tying them into a cross for the procession into service the following day. Palm Sunday also is the last Sunday before Easter Sunday.

On Palm Sunday, the palm fronds are used in the processional as mass begins to signify the entering of our Lord in Jerusalem.

Most parishes are given palm fronds during the recessional so that they may keep them until the next year’s burning.

The burning of those palms is how they accumulate the ashes that are placed on the church-goers’ foreheads, in the shape of a cross.

Although the ashes are not a holy obligation, the ashes can be a profound symbol for some observers.

The difference is that this morning I got up and went to church and as the mass progressed I received my anointed ashes, which were spread by a priest across my forehead in the shape of the cross as he read Genesis 3:19, “For dust you are and to dust you shall return.”

What a significant moment for me. It stops me dead in my tracks every time.

“For dust you are and to dust you shall return.” So often I do not stop to think about that.

On Ash Wednesday, it is a full day where I fast (bread and beverages for me this year as I will be donating blood tomorrow), I repent, and I just think.

I consider Genesis and the Creation, and I contemplate my own mortality and, of course, what my life has earned me during eternity.

Ash Wednesday is a day I look forward to every year to set aside as my day with God where He and I just chat about life since last year’s Lent, and everything the year has brought me, or that which I have lost.

Throughout this day, I consider my shortcomings and the things I need to remove or strengthen in my life during the season that is upon us.

And should I forget or lose my focus throughout the day, resting upon my face is a reminder of what my day should be about and it provides a redirection of my thoughts every time I catch a glimpse.

All in just one day I am able to gain perspective and knowledge, and all the while I am marked with a great conversation piece to tell others of my Savior, about the time of year I am celebrating, and why they should give it a try.