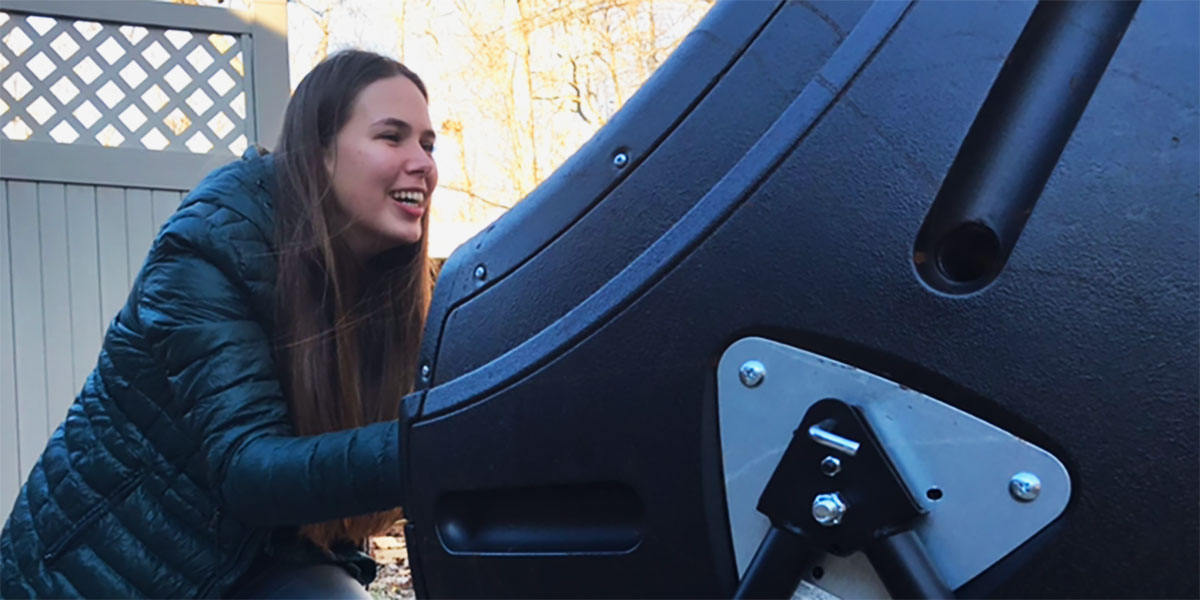 Behind a college dormitory on Missouri Baptist University’s campus sits an 80-gallon compost bin full of coffee grounds and banana peels marinating proudly as property of a new science club on campus called MBU in Nature.

Directed by Dr. Shayani Pieris, assistant professor of plant sciences at Missouri Baptist University, MBU in Nature got its roots from one particular class’s inspiration during the fall 2017 semester, an Environmental Science and Conservation class taught by Pieris.

Tanya Drochner, vice president of MBU in Nature, said, “As part of the class we took a field trip for an entire day to a bunch of different farming operations. And so we got to first-hand see, watch and eat even things that had been grown in different types of gardens and different types of agricultural settings.”

It was on this day trip that Drochner and other members of her Environmental Science class started imagining the possibilities of what they had experienced on these farms and making them a reality at MBU.

“We were all just very excited about what we had seen and how doable all of it was,” said Drochner.

With gardens on their mind and dirt still under their nails, Drochner, Pieris and other class members began to dream big for MBU.

Consequently, MBU in Nature has formed due to Pieris’s passion combined with her students’ inspiration.

The club acquired an 80-gallon compost bin that requires student effort in order to maintain.

The unique quality about MBU in Nature’s compost bin is that it is utilizing resources from around campus and sparing no effort to involve the MoBap community.

For example, thePerk is contributing coffee grounds, the cafeteria is allowing the club to utilize leftover food for the compost pile and the Admissions Office has donated a bale of hay.

This compost bin isn’t valuable just for its good looks though; its purpose is to be the behind-the-scenes engine for a garden this semester.

“Our vision is to basically try to get people to be in nature and growing things and seeing for themselves like how science and nature and food and agriculture are just a part of everyday life,” Drocher said.

Eventually MBU in Nature dreams of having a fully functioning garden maintained by students all over campus pouring time and energy into its growth.

Though this garden is only a dream for now, Drochner and her teammates are determined.

“We would like to grow our garden without any artificial and chemical fertilizers or pesticides. We’re hoping that the compost created from this bin will be enough for our small garden,” Drochner said. “As far as pesticides, there are certain plants that repel insects, so by planting things in a certain order hopefully we’ll be able to avoid that.”

Looking ahead to the warmer months, the options for the small garden are vast for MBU in Nature.

“Maybe [we’ll plant] an herb garden or tomatoes, but basically the club is the one heading this up, because there has to be a responsibility of someone has to water the garden, someone has to turn the compost bin, someone has to collect food,” Drochner explained.

As MBU in Nature grows and dreams, it is branching out with intentionality to spread roots far and wide across campus.

“The club is providing structure for this to happen and it is starting with our environmental science class, but it is open to anyone, whether you’re a science major, whether you’re in our class, basically anyone,” said Drochner.

According to Jonathan Moran, this club has intentions of glorifying God across MoBap and the STL community.

“God has given us so much to be in awe about in the field of science and this group will help to see the goodness of God,” said Moran.

If you desire to learn more about MBU in Nature or are interested in being a part of this club, contact Moran at 1446735@mobap.edu.